The results from the winter Olympics in Sochi are in and.... we're number 2!

This does not have the same panache as "we're number 1," the standard chant at Republican national conventions as "USA! USA!"  Still, our athletic prowess is exceptional, compared to that in other fields. The map below is from Reporters Without Borders via Mashable? (perhaps somewhere someone is writing Main Street Liberal?), who reports

Based on its pursuit and prosecution of whistleblowers and information leakers, the U.S. dropped 13 positions, landing at 46th — between Romania and Haiti — on the "World Press Freedom Index of 2014." Reporters Without Borders, a global advocacy group based in France, compiles the report each year based on an examination of factors (.pdf) such as violence, media independence and transparency during the previous calendar year.

The ranking of some countries has also been affected by a tendency to interpret national security needs in an overly broad and abusive manner to the detriment of the right to inform and be informed," the 2014 report reads.

The U.S. government was chastened in the report for its handling of two information leakers, Chelsea Manning, born Bradley Manning, and Edward Snowden. Manning, a former private in the U.S. Army, received a 35-year prison sentence in August for providing WikiLeaks with thousands of secret logs chronicling the U.S. war efforts in Iraq and Afghanistan, in addition to other documents. 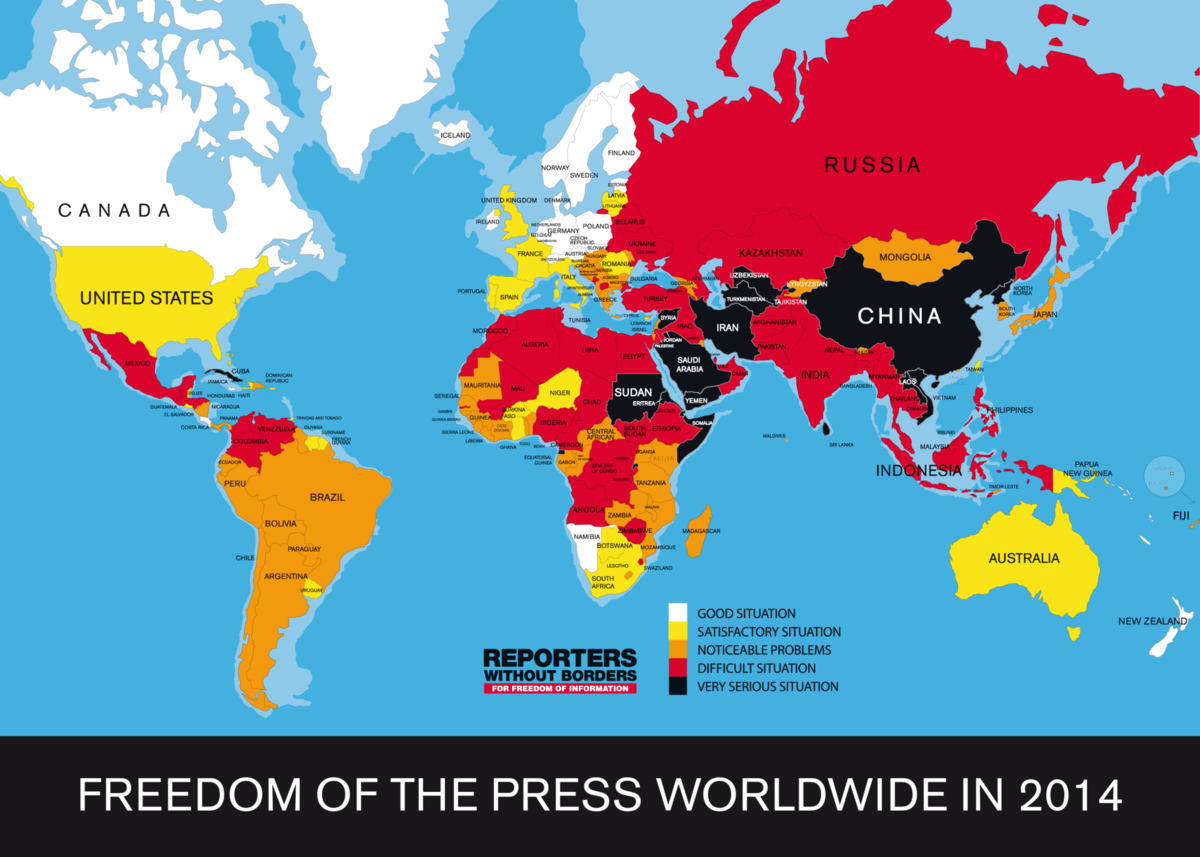 Unfortunately, that is not what Repub leaders have in mind when they shout "exceptional! exceptional!"  Dick Cheney, a more sophisticated, albeit less well-meaning war hawk than John McCain, has stated "I do not believe that Barack Obama believes that the U.S. is an exceptional nation, and the whole concept that the world is a safer place, a more peaceful place, when the U.S. is powerful, able to in fact project its will in various places around the world,"   ( It's so comforting to live in the world as it was when one was born.)

The good news, however, is that the USA is 102 places ahead of Russia in press freedom and only six places behind South Africa.  Even though President Obama has contributed to our low ranking, many Repubs will be cheered to learn that the USA is cracking the whip on those who would dare to keep us informed. And they will be even less exorcised that our nation has fallen behind in an area that has drawn the President's attention:

The United States, the country that invented the Internet, is falling dangerously behind in offering high-speed, affordable broadband service to businesses and consumers, according to technology experts and an array of recent studies.

In terms of Internet speed and cost, “ours seems completely out of whack with what we see in the rest of the world,” said Susan Crawford, a law professor at Yeshiva University in Manhattan, a former Obama administration technology adviser and a leading critic of American broadband...

The disagreement comes over how far behind the United States really is in what many people consider as basic a utility as water and electricity — and how much it will affect the nation’s technological competitiveness over the next decade. “There aren’t any countries ahead of us that have a comparable population distribution,” said Richard Bennett, a visiting fellow at the American Enterprise Institute, who said that the United States was closing the gap.

But as the Obama administration warned in a report this year: “To create jobs and grow wages at home, and to compete in the global information economy, the delivery of fast, affordable and reliable broadband service to all corners of the United States must be a national imperative.”

The World Economic Forum ranked the United States 35th out of 148 countries in Internet bandwidth, a measure of available capacity in a country. Other studies rank the United States anywhere from 14th to 31st in average connection speed.

More significantly- though less surprisingly- the USA lags behind most of the developed world in income equality and mobility, as a chart (picked up by The Business Insider) from Miles Corak in 2013 found: 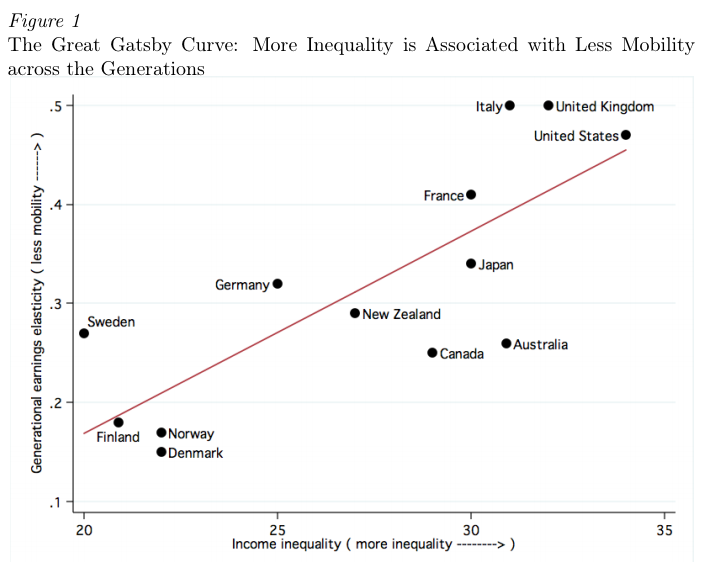 The good news is that the USA has greater mobility than Italy and the United Kingdom, and is 102 places ahead of Russia in press freedom and only six places behind South Africa.

At a fundraiser last September for Virginia Repub gubernatorial candidate Ken Cucinelli, Senator Marco Rubio (R-Fla)  warned "I would ask you to envision a world without an exceptional America."  It's starting to come into focus, Marco.