"Greg Sargent," reads the short biography on The Washington Post site, "writes The Plum Line blog, a reported opinion blog with a liberal slant -- what you might call 'opinionated reporting' from the left."

So what is Greg Sargent thinking?

In a recent blog, Sargent approvingly quotes liberal evangelical (evangelical liberal?) Jim Wallis of Sojourners, who unequivocally states "It has become abundantly clear that immigration reform is the moral test of our politics."  (Remember that, if you're a single mother trying to raise young children on minimum wage at McDonald's while the CEO pulls down $13.8 million, or if someone who has lost a loved one to cancer because of lack of health insurance.)

Presumably, Wallis and Sargent both believe that refusal to support comprehensive immigration reform constitutes immorality.  Sargent links to a post of his from last August in which he argued the very conservative Spencer Bacchus of Alabama "hits all the key notes,"  lauding the Representative for saying


“Almost 99 percent of ‘em are here for the same reasons that our ancestors came here. They’re here for a better life.”

And:
“Y’all may think I’m copping out, but with my Christian faith, it’s hard for me to say that I’m gonna divide these families up.”

And:
“Bring ‘em into our system. Give them legal status. They will pay Social Security. They’ll work hard.”

And:
“I’ll tell you this, as your Congressman, I am not gonna separate families or send them back.”

Sargent maintained Bacchus is one of the few Republicans to have "offered up the conservative case for comprehensive immigration reform ."  Singling out illegal immigrants for working hard, Bacchus has in fact encapsulated conservative philosophy:  Some people work hard. The rest are lazy.

And Sargent's conservative heartthrob wants to "give them status."  An increasing number of Republicans has hinted at support for legalization, evidently as a means to avoid supporting the bill passed by the Senate, which would grant eventual citizenship.  In late January,The Washington Post reported

Speaker John A. Boehner (R-Ohio) released a list of Republican “principles” on immigration. The statement declared that there would be “no special path” to citizenship for illegal immigrants, but that, in general, they should be allowed to “live legally and without fear” in the United States if they meet a list of tough requirements and rules.

Boehner advocates the near impossible:  that otherwise illegal immigrants, denied citizenship, live without fear.  McDonalds showed how it's done:

A former McDonald’s franchisee will pay out a six-figure settlement after allegedly subjecting student guest workers to 25-hour shifts, substandard housing and repeated retaliatory threats. The settlement, announced Tuesday by the federal Department of Labor, includes $205,977 in damages and back pay to 291 workers, the majority of whom landed at McDonald’s under the State Department’s J-1 visa program for “cultural exchange.” Fifteen of those workers drew international attention and support after mounting a surprise strike last March.

“The conditions at this McDonald’s were not the exception, but rather an extreme version of the rule,” charged National Guestworker Alliance director Saket Soni, whose group spearheaded the strike. Local DOL director Al Gristina alleged in a statement that franchisee Andy Cheung’s company Cheung Enterprises “willfully took advantage of vulnerable student workers living and working in our country under the J-1 visa program.” Andy Cheung and McDonald’s did not respond to requests for comment.

As I’ve reported, the McDonald’s workers first walked off the job March 6. “We are afraid,” guest worker Jorge Victor Rios told me before going on strike. “But we are trying to overcome our fear.” Rios and his comrades at central Pennsylvania McDonald’s locations accused Cheung of rampant and ongoing abuse: Schedules of as little as a handful of hours a week (despite paying $3,000 on the promise of full-time work), or as many as 25 hours straight, without any overtime pay. Cramped housing including bunkbeds in their boss’ basement, for which they paid him rent that could rival a meager week’s pay. And threats ranging from curtailed hours to deportation, for offenses ranging from reporting abuse to refusing a last-minute order to come to work.

“Nothing that they told me is true, because everything is a lie,” striker Luis Fernando Suarez told me last year. Suarez said his so-called cultural exchange had been “like an ugly face of the United States … I didn’t feel safe.”

With backing from the National Guestworker Alliance – the non-union labor group behind guest worker strikes in the Hershey’s and Wal-Mart supply chains – the McDonald’s strikers picketed McDonald’s stores in several cities, rallied outside the McDonald’s CEO’s office and home in Chicago, and then mounted a June “Global Day of Action” after returning to their home countries. McDonald’s’ only public concessions came early in the campaign: Minutes after a March 14 protest at a Times Square store, the corporation announced that Cheung had “agreed to leave the McDonald’s system.” The corporation did not accede to NGA’s other demands, including new organizing protections, disclosures about its use of guest workers, and full-time work for U.S. workers whose conditions the J-1 students argued they were being used to drive down. But Soni argued that Cheung’s settlement with the Labor Department vindicated the workers’ courage: “If the workers didn’t go on strike, I don’t think any of this would have come out.”

Spencer Bacchus gushes "they'll work hard" about illegal immigrants, distinguishing them from native born (white and black) workers and legal immigrants.  They worked hard at McDonald's, too, because of "threats ranging from curtailed hours to deportation."  And so it goes without citizenship.

This economy does not need additional job applicants- especially those who, lacking citizenship, are easily exploited.  But additional jobs, down 851,000 from seven years ago (according to the chart below from the St. Louis Fed via The Economic Populist). are critical, a point typically ignored by Republicans and some progressives with little faith in the American worker.  Spencer Bacchus and the like-minded want to "bring 'em into our system" of low wages, no benefits, and total subservience to employers, creating a two-tier system for workers and lowering wage rates throughout the American economy. 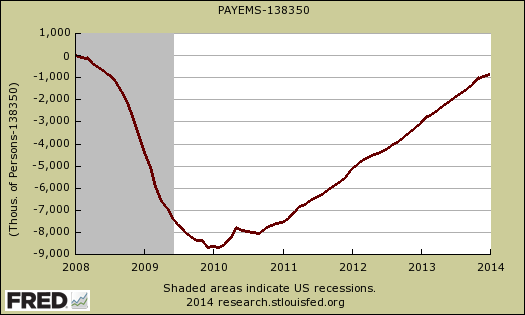