All That And More


It probably started in 1962, when an anonymous theater actor reportedly quipped “Honesty. That’s the thing in the theater today. Honesty … and just as soon as I can learn to fake that, I’ll have it made.”

Fortunately, Chris Chris Christie toured the New Jersey shore while commending Barack Obama for his response to Hurricane Sandy. That was fortunate for Barack Obama, unfortunate for Mitt Romney, and understandably is virtually an insurmountable hurdle for a GOP candidate for president. Had Christie skipped the photo-op and simply endorsed the incumbent, he would have done his fellow Repub less damage.

Still, Christie in some quarters has the (undeserved) reputation as a straight-talking truth teller.  When the NJ governor was about to announce his presidential candidacy, a Huffington Post reporter wrote

In a video posted online this weekend, he talked about his family against a montage of shots from the town hall sessions that have earned him his reputation for plain talk. To supporters, he is honest and blunt. Detractors see him as a bully.

In Christie's video, white letters against a black background read simply: "Telling it like it is."

"Plain talk" can be merely simplistic rhetoric, though it comes out as "honesty." And viewing Chris Christie as honest is about as accurate as it would to refer to famous atheist Richard Dawkins as a "bible thumper."

In June, (north Jersey) Star-Ledger editorial board director Tom Moran summarized of the governor "don't believe a word the man says."   Campaigning for a first term as governor, Christie pledged "the notion that I would eliminate, change, or alter your pension is not only a lie but cannot be further from the truth. Your pensions and benefits will be protected when I am elected governor."

After the unions ponied up and the state failed to make the payments it promised, unions took the Administration to court, but lost.  "We just won a major court decision supporting the pension reforms that we put into place in 2011," Christie then bragged to ABC News' George Stephanopoulos.  But Christie had to understand that the Court actually found the "reform" unconstitutional, as Moran notes, "because it was an argument put forward by his own lawyers so that he could escape the law's provision requiring big payments into the pension fund."

That's  not all. Christie has lied also about his record on gun control, prior view about abortion, and a statement made by US Attorney Paul Fishman about Bridgegate. Moran probably could have pointed to other fabrications, but he ran out of space.

And so it was that in Cleveland on Thursday, Christopher J. Christie was in his usual mode, as demonstrated by his argument (video below, obviously) with Kentucky senator Rand Paul over spying. He responded to a question from Megyn Kelly with

Yes, I do. And I’ll tell you why: because I’m the only person on this stage who’s actually filed applications under the Patriot Act, who has gone before the federal — the Foreign Intelligence Service court, who has prosecuted and investigated and jailed terrorists in this country after September 11th.

I was appointed U.S. attorney by President Bush on September 10th, 2001, and the world changed enormously the next day, and that happened in my state.

When you actually have to be responsible for doing this, you can do it, and we did it, for seven years in my office, respecting civil liberties and protecting the homeland.

And I will make no apologies, ever, for protecting the lives and the safety of the American people. We have to give more tools to our folks to be able to do that, not fewer, and then trust those people and oversee them to do it the right way. As president, that is exactly what I’ll do.

He won't be doing anything "as president" because he's not getting there, in small part because viewers heard Paul recalling "I know you gave him a big hug, and if you want to give him a big hug again, go right ahead." (Christie never hugged Obama, but this was a Republican debate- facts optional. No, facts discouraged.) 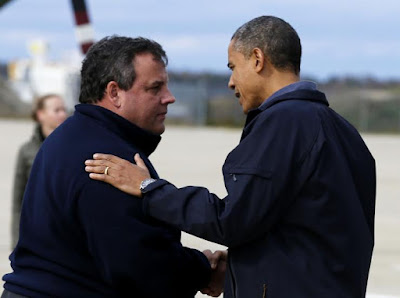 Further, Christie dug into his bag of manipulative tricks by exploiting the awful events of September 11, 2001, especially when he added

They had a lot to do with politics. He did go to funerals, unavoidable because he was governor and hails from the vast suburb of New York City known as northern New Jersey, where a tremendous number of World Trade Center workers resided.  But "protecting the lives and the safety of the American people" was intended to cast himself as a hybrid of President of the United States and a police officer responding to the conflagration. He was, ultimately, governor of an adjacent state.

Nonetheless, it didn't end there, with Christie lapsing into his habit of flat-out lying. Analyzing Christie's debate performance (and it was a performance), Politico's Matt Friedman explains

Most were things we’re used to hearing: His claim to have closed a structural budget deficit that’s largely the same as when he took office. His talk about how bad New Jersey’s economy was when he got in without the context of the global economic collapse that preceded him. Here’s a new one: Anyone watching last night would have come away with the impression that Christie became U.S. Attorney on September 10, 2001. While in previous versions of this story he has described getting a phone call from the White House on that date informing him he would be nominated, he wasn’t formally nominated until December 2001, and he wasn’t actually sworn in until early 2002.

Disturbingly, Christie's actual lie was not the worst thing he said. He stated that he was appointed, though he was only nominated. Christie is aware of that, though "appointed" may have come to mind because approval by the Senate was a virtual fait accompli.

"Would have come away with the impression" is generous to the governor. As Friedman pointed out, Christie was not appointed (or nominated) on September 10.  He was told on September 10 that he would be nominated.

Though a definitive lie, it might have been an insignificant one except for that impression, larger than Friedman understands, which Christie was trying to create. Most significant was the juxtaposition of being appointed on September 10 and the "world (having) changed enormously the next day" leaves the impression- as was intended- that he was put in charge the day before the attack.

That's a critical piece of the picture he tried to paint of being intimately involved with America's response to the greatest terrorist attack in history. ("This is not theoretical to me. I went to the funerals. We lost friends of ours in the Trade Center that day. My own wife was two blocks from the Trade Center that day, at her office, having gone through it that morning.")

Christie's remarks about his (alleged) role in this staggering event bring to mind Senator Joe Biden's slam of Rudy Giuliani: "there's only three things he mentions in a sentence: a noun and a verb and 9/11. I mean, there's nothing else."  The self-serving comments made by Christie are shameless, not unlike the man himself. He may be a bombastic and belligerent blowhard (not unlike the most controversial presidential candidate). However, he is something else: a major league, self-aggrandizing fabricator. Oh, and an awful governor.

Correction: In my last post I wrote "There was no applause at the first debate,sparsely attended by design, by a Fox News decision to make the candidate selection process any more chaotic than it appears." I was wrong- the decision was made by the Republican National Committee, not by Fox News.