You are looking at an optical illusion. It may seem that it's a middle-aged woman in a red apron whom you're looking at. But it's really an empty suit. And Donald Trump knows it. 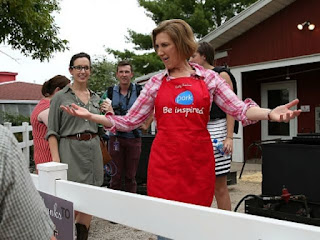 Carly Fiorina gained a lot of favorable media attention when, at the GOP presidential debate on August 6 featuring the candidates with little support, she went hard after Donald Trump. She remarked

I would also just say this. Since he has changed his mind on amnesty, on health care and on abortion, I would just ask, what are the principles by which he will govern?

It seemed such an effective attack. Fiorina called Trump out for both being a closet liberal, and for being a good buddy of the Clintons.  The media gushed as poll numbers for the failed businesswoman soared.

But fame has its downside.  On August 15 at the Iowa State Fair (video below from one day earlier, in New Hampshire)

while repeatedly describing her as “nice woman” -- took aim at his GOP rival, former Hewlett-Packard CEO Carly Fiorina, attacking her record in the private sector and her failed California Senate bid.

“She's a very nice woman, she got fired, she did a terrible job at Hewlett-Packard, she lost in a landslide -- other than that, she's a very nice woman," Trump, echoing recent comments, told ABC News Martha Raddatz when asked for his thoughts on his solo female GOP competitor for the nomination.


It had the desired effect. Three days later, Breitbart reported (video below)

The Journal caught up with Fiorina at the Iowa State Fair and asked if she had a response to Trump’s immigration plan, released over the weekend. WSJ posted a video of the exchange with Fiorina.

“I think there are aspects of his plan that make a lot of sense,” Fiorina answered in the video as she was walking, surrounded by a group of reporters. “It makes a lot of sense for example to deport illegals who have committed crimes.”

The WSJ reporter followed up by asking, “But to deport everyone who is here illegally in this country, is that practical or do you think that’s a bridge to far for you?”

“I think we must begin by securing the border then when we’ve done all of that, then we can decide what to do with the people who have come here and stayed illegally. My own view is they do not earn a pathway to citizenship because I know too many people, as do all of us, who have done it the right way.”

The reporter tried to ask another question, “Has Trump gone too far?” However, Fiorina interrupted.

“You’ve had five questions so far,” Fiorina said, interrupting the reporter and turning her attention to another reporter in the crowd that was surrounding her as she walked around at the Iowa State Fair.

Besides being accurate, the front-runner may have figured slamming the only woman in the race wasn't much of a gamble.   After being annoyed by Megyn Kelly in the main debate earlier this month, Trump said of the Fox News host "You could see there was blood coming out of her eyes. Blood coming out of her wherever." I and most people thought ripping a popular GOP TV personality would prove counter-productive but in a matter of days, Trump and Roger Ailes had made up, the candidate would have his rear end kissed on Fox and Friends and by Sean Hannity, and Megyn Kelly would suddenly depart on a ten-day vacation.

In retrospect (always 20-20) it might have been predictable.  After Republican Representative Joe Wilson of South Carolina yelled "you lie" at President Obama during the 2009 State of the Union address, Wilson was "rebuked" on a nearly party-line vote in the House of Representatives. He apologized as some Republicans, including Rush Limbaugh, vowed revenge. Nothing transpired.

Republicans the past several years have proven themselves to be excellent punchers. However, as Carly Fiorina most recently demonstrated, they are poor counter punchers.  Hit back hard, and most of them wilt.