Say what you will about Rand Paul.  He is, for instance, an avowed supporter of a balanced budget amendment, which Charles Pierce has referred to often as "the worst idea in American politics."  (The second worst is an elected judiciary. Right, again.)   Paul believes in the right to discriminate against people if they can rationalize it on the basis of religious belief: "if people have an opinion, it's a religious opinion that is heartly felt, obviously they should be allowed to practice that and no government should interfere with them." That probably should be a finalist for the third worst idea in American politics, given that the balanced budget amendment and election of judges have the first two positions wrapped up.

To his credit, Paul does depart from his colleagues in opposing the administration's claim of an untrammeled right to spy on the citizens it serves. He has also departed slightly from his party's foreign policy consensus and has sponsored an amendment requiring the President to declassify 28 pages of the congressional inquiry into the terrorist attacks of September 11, 2001.

When President Bush in 2003 classified that portion of the 900 page report, he claimed that its release would make it "harder for us to win the war on terror." Representative Walter Jones- a Republican from North Carolina- noted "There’s nothing in it about national security. It’s about the Bush administration and its relationship with the Saudis."

Jones has read the 28 pages.  Then-Florida Senator Bob Graham, who asserts "That chapter refers primarily to the issue of who financed 9/11 and it points a very strong finger of suspicion at Saudi Arabia," has read them.

Nonetheless, another Graham, and contender for the Repub presidential nomination, Lindsey Graham, has not read them.  Another candidate, failed governor Chris Christie, whose recent debate performance amounted to "I care more about the 9/11 victims than anyone else," contended “Different people in Congress are interested in different things.  If they have an interest, they should go and they should read it. I don’t know why they wouldn’t have an interest, but I’m not going to sit here and dictate to people what they spend their time on."

As far as is generally known, no one has asked Donald Trump, who now is the leading candidate despite Thursday's event, what he thinks about the 28 pages, nor whether he has any clue what they refer to. However, Trump- testosterone flowing- phoned in to GOP TV's Fox and Friends (video below) Tuesday morning and stated

Now we take oil. We should have kept their oil. Now we go in, we take the oil. We thereby take their wealth.

The interview ended after Trump went on and on about the Mideast.  Even if it hadn't, no one would have asked him about the 28 pages. Nor would anyone ask him who takes the oil, who it's given to, and for whose benefit. The USA ("we?") already fought one war to enable multinational oil companies to develop oil fields.  If Donald Trump wants another, he should tell us. 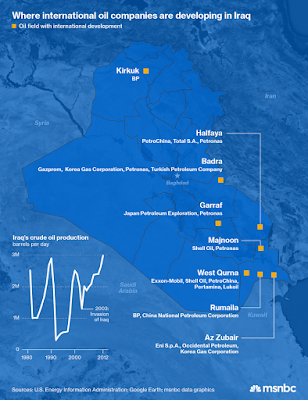 Donald Trump may be a gasbag. But he's the Republican Party's gasbag, and someone ought to determine what lies behind the bravado.  He tells us the Mexican government is sending to the USA all manner of violent criminals, but he's going to get them to pay for a wall to keep those people in Mexico.  Now he says "we go in" and "take" the wealth of the Saudis, whom he argued in 2011 would raise the price of gasoline to "5 or 6 dollars a gallon for gasoline pretty soon."

Trump doesn't tell us where the wealth would go. Nor has he taken the first step (acquiring information) in deciding upon policy toward Saudi Arabia. He demonstrates no more curiosity than Lindsay Graham or Chris Christie about what the government in Riyadh has been up to.