There Is Something About John

So it's decided: Carly Fiorina was the big winner in last night's undercard, held in Quicken Arena, as was the real debate.

The second debate was the only debate which counted, and not only because it was understood as the confrontation among the candidates with the greatest public support (if only by slight margins, and well within the margin of error).   There was no applause at the first debate, sparsely attended by design, by a Fox News decision not to make the candidate selection process any more chaotic than it appears. So a sound bite from the first debate will not be followed by the affirming applause following a sound bite from the second debate.

The modus operandi of the communications arm of the Republican Party was made clear when Brett Baier opened the 9:00 p.m. EST face-off by declaring "we expect them to be enthusiastic, as you heard, we don't want to take anything away from the valuable time for the candidate. So, we're looking for somewhere between a reaction to a LeBron James dunk and the Cleveland Public Library across the street."

"Take away time from our questions," a forthright Baier would have worded it, "with your enthusiastic applause for the scripted anti-Democratic lines of the candidates."

In the exaggerated view of one Politico writer, Fiorina shined throughout, including in her closing statement, in which she said contended "2016 is going to be a fight between conservatism, and a Democrat party that is undermining the very character of this nation. We need a nominee who is going to throw every punch, not pull punches, and someone who cannot stumble before he even gets into the ring."

The subject of her passive-aggressive shot, John Ellis Bush, was in characteristic form during the later event, which affords me the opportunity to place here the following piece, which was to have been posted several days ago:

That someone is John Ellis Bush, whose recent public statements are almost- almost- as mystifying as troubling.

Bush, who has profited handsomely (actually, gorgeously) through the decades from family connections, recently claimed "people need to work longer hours and through their productivity gain more income for their families." Productivity has risen dramatically (graph below from Economic Policy Institute) in the USA and Americans are not a lazy bunch, especially the ones who work two or three part-time jobs at menial wages. (And that's not including workers who are required to be on the job, checking e-mail, finishing projects, or otherwise 24 hours a day). 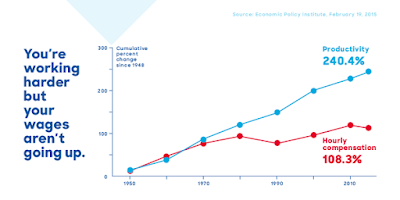 Last month, Bush recommended we "figure out a way to phase out" Medicare because future recipients are "not going to have anything." He neglected to note that recipients will have no Medicare only if he and like-minded Republicans are successful in phasing out the program of health care for  the elderly.

John Ellis will not be funded by the people he believes are sloughing off, nor are he or those ultra-wealthy donors the individuals who will be most dependent on Medicare. It's too easy to ascribe elitism to a Bush, however. Interviewed Tuesday in Nashville by Southern Baptist Convention president Russell Moore, John exhibited instead an unfamiliarity with conventional English, rationalizing

For those of you unfamiliar with whatever language Bush is speaking, the former Florida governor seems to be saying that refusing to provide a service to gay people is not discrimination unless the business owner is daft enough to tell them that he is refusing service because they're gay.  It's hard to believe he believes that, but there it is.

In the same city the same day, Bush maintained

But abortion should not be funded by the government, any government in my mind.

Blasted twice by Hillary Clinton and once by the DNC, Bush in part responded

I was referring to the hard-to-fathom $500 million in federal funding that goes to Planned Parenthood — an organization that was callously participating in the unthinkable practice of selling fetal organs. Democrats and Republicans agree we absolutely must defund them and redirect those funds to other women’s health organizations,

This at least was expressed in what we always assumed was Bush's native language, English. It was, however, extremely disingenuous.   Funding of abortion by the federal government, by Planned Parenthood or anyone, is illegal, though Republicans continuously imply (without stating) that it goes on routinely.

Oh, a minority of states fund medically necessary abortions but that is limited and is not what any Repub thinks of when he/she hears about Planned Parenthood or government funding abortions. They believe the federal  government pays for it and Planned Parenthood profits from it. Additionally, if that were explained by Bush, Walker, Jindal, or any of the other GOP propagandists, somewhere there may be someone in the media questioning why Republicans have yet again demonstrated they don't give a rat's behind about states' rights.

Of course, Democrats and Republicans can be said to agree Planned Parenthood should be defunded in much the same way it can be said "drug addicts and priests commit felonies." Yes, priests (being human) commit felonies, but far less often than drug addicts; and in much the same way Democrats- two Senators out of 46- want the organization defunded.

Presumably, John Ellis doesn't believe the practice of selling fetal organs is "unthinkable"; he's accusing Planned Parenthood of doing it.  Inasmuch as money is being exchanged when the organization sells primarily tissue, arguably organs in some cases, it is technically a sale. Given that the money covers only expenses- and not all of that, in most instances- "callously participating in the unthinkable practice of selling fetal organs" is callous speech.

John Ellis Bush, however, is not careless. Were he so, he would have stated that Planned Parenthood is paid by the federal government for performing abortions or at least that the federal government is funding them.   Instead, he merely leaves the clear (and false) impression that much, if not all, of that $500 million subsidizes abortions.

But when a guy plays fast and loose with the facts, even inferring that he believes discrimination is not practiced unless one declares her bias, he is not leveling with the American people.  Why, you'd almost think he's related to the fellow who lied when unqualifiedly asserting "The British government has learned that Saddam Hussein recently sought significant quantities of uranium from Africa."

Stumbling and bumbling (as Fiorina implied) and lacking in backbone (as she did not).   Last night featured the same John Ellis Bush we've all come to know.