Cracking Down On Campus Drug Use To Make A Point


It's very difficult to think calmly and rationally when your judgments are colored by race.  So Van Jones (photo, Reuters/Jonathan Ernst) deserves compassion and sympathy rather than vitriol.  Still, he needs to be shown the way out of the morass of illogic in which he is wallowing.  There are many examples of misguided reasoning in Jones' recent interview with Salon's Elias Isquith. Not the most significant but perhaps the most interesting comes when nearly at the end Jones claims

Listen, real economic populism that tries to deal with the question of income inequality cannot fail to talk about the criminal justice system. I mean, a major driver of income inequality — and certainly racial inequality — is that you have whole categories of people who are being herded off to prison for stuff that kids are doing on Ivy League campuses right now. But they have nothing on their records, while you’ve got poor kids, living 20 minutes away, who are called felons. As long as that’s happening, you will have income and racial inequality in this country.

It's not only Ivy League colleges on which students have a greater immunity than anyone- white or black, rich or poor, male or female- has off the campus.  One impediment to enforcement is the conflict between town and gown aggressive enforcement would provoke. Additionally, drug activity on campus usually is conducted less openly than it is on the streets, which mimics the greater openness generally with which blacks commit drug offenses, one of the reasons African-Americans are arrested at a greater clip than European-Americans.

Order is typically maintained at a residential college by campus police. Indeed, those police can be empowered to make arrests and perform the same law enforcement functions as do municipal police. In fact, they already have that power in some states. We got a glimpse as to how that can turn out when

A white campus police officer was charged with murder Wednesday for fatally shooting an unarmed black man after a routine traffic stop last week, an incident a local prosecutor decried as a “senseless, asinine shooting.”

The episode added Cincinnati to the list of cities where white officers have shot and killed black civilians, drawing national attention and fueling an ongoing debate over police use of deadly force against minorities.

A similar shooting in 2001 provoked violent riots here. With that memory still fresh, local officials moved swiftly and deliberately to try to contain the fallout.

“It was so unnecessary for this to occur,” Hamilton County prosecutor Joe Deters said at an afternoon news conference. Of more than 100 police shootings reviewed by his office, Deters said, “this is the first time that we’ve thought, ‘This is without question a murder.'”

University of Cincinnati police officer Raymond Tensing, 25, now faces life in prison for shooting Samuel DuBose, 43, on the evening of July 19, roughly two minutes after pulling him over for failure to display a front license plate. At first, Tensing said he was forced to shoot DuBose because he was being dragged by the car and nearly run over, according to the initial police report. But Deters said that didn’t happen, and Tensing was wearing a body camera that captured the incident.

The video, released Wednesday, appears to show DuBose turning the ignition after Tensing tells him to take off his seat belt. The officer reaches toward the door, yells “Stop!” and draws his gun. Then he thrusts the weapon through the open car window and fires a single round, striking DuBose in the head.

Jones might want to reconsider that idea of setting loose campus police, who would probably be at the center of the the effort Jones is advocating.  University of Cincinnati police officer Tensing had the legal authority to pull the motorist over but his behavior was an apparent affront to decent policing.

It is a symptom of racial inequality. A society that is racially unequal is likely to end up having a differential impact upon one part of society than another. Poverty, broken families, limited job opportunities, and restricted access to inherited wealth have a habit of doing that. Those are the primary factors which result in the greater burden of arrest and incarceration in the African-American community.

As luck would have it, those are among the things to which Bernie Sanders has devoted his career and his presidential campaign, which realization has been obscured by the militant wing of Black Lives Matter and by Van Jones. 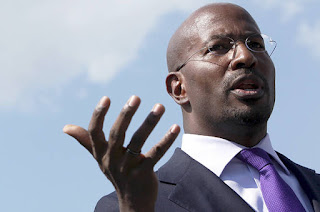