Often, things work out for the best. And so it is that progressives should hope that Ruth Bader Ginsburg and the three other liberal Supreme Court Justices did not ignore the potential ramifications of signing on to the opinion written by Justice Kennedy in Obergefell v. Hodges, the decision overturning same-sex marriage bans.

In a recent conversation with a former law clerk of hers, Justice Ginsburg stated

Perhaps because in this case it was more powerful to have the same, single opinion. ... That kind of discipline is to say, "I’m not the queen and if the majority is close enough to what I think ... then I don’t have to have it exactly as I would have written it." ... On the whole, we think of our consumers -- other judges, lawyers, the public. The law that the Supreme Court establishes is the law that they must live by, so all things considered, it’s better to have it clearer than confusing.

Ginsburg evidently was wary of the possibility that had she or Breyer, Sotomayor, or Kagan issued a concurring opinion emphasizing the Fourteen Amendment guarantees of equal protection of the law and due process, Justice Kennedy would have bolted, leaving only four votes to strike down the marriage ban.  Instead, they signed on to an opinion which imagined at best an America (or a world) of an earlier time:

From their beginning to their most recent page, the annals of human history reveal the transcendent importance of marriage. The lifelong union of a man and a woman always has promised nobility and dignity to all persons, without regard to their station in life. Marriage is sacred to those who live by their religions and offers unique fulfillment to those who find meaning in the secular realm. Its dynamic allows two people to find a life that could not be found alone, for a marriage becomes greater than just the two persons. Rising from the most basic human needs, marriage is essential to our most profound hopes and aspirations.

Fourth and finally, this Court’s cases and the Nation’s traditions make clear that marriage is a keystone of our social order. Alexis de Tocqueville recognized this truth on his travels through the United States almost two centuries ago: This idea has been reiterated even as the institution has evolved in substantial ways over time, superseding rules related to parental consent, gender, and race once thought by many to be essential.

Insofar as marriage was (as Kennedy wrongly believes) "a keystone of our social order," it was opposite-sex marriage, but never mind.  The Court held "that same-sex couples may exercise the fundamental right to marry," one other courts have found, though absent in the Constitution.  An ardent supporter of gay marriage, Slate's Mark Joseph Stern responds to Ginsburg's admission by speculating

Had Ginsburg written an Equal Protection concurrence, she probably would have argued that laws targeting gay people must be subject to heightened judicial scrutiny. The other liberals may well have signed onto her opinion, and lower court judges could have used her logic to strike down anti-gay laws that don't relate to marriage.

This is only one of the profound implications of the reasoning of the majority in Obergefell. When late last year Pew Research Center (its illustrative map, below) asked respondents

As the map below from Movoto illustrates, the marriage rate has risen dramatically over the past half-century, which suggests Justice Kennedy was fantasizing when he claimed

No union is more profound than marriage, for it embodies the highest ideals of love, fidelity, devotion, sacrifice, and family. In forming a marital union, two people become something greater than once they were. As some of the petitioners in these cases demonstrate, marriage embodies a love that may endure even past death.

The graph from Pew below indicates Americans aren't applauding as lustily as the esteemed Justice. While we welcome the world of "marriage equality" and individuals still are legally discriminated in housing, employment, and education because of their sexual orientation continues, there may be a big price to pay for Justice Ginsburg's realpolitik. 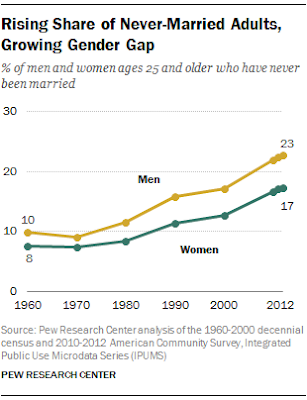