Not The Worst Law In American History


When a faction of Black Lives Matter confronted Hillary Clinton on August 11 in Keene, New Hampshire, its spokesman contended

I think that the next step, respectfully, and I have attempted to allow you, and I feel like we have allowed space for a nice conversation and it is a pleasure and an honor to be in this dialogue with you but i think that a huge part of what you haven’t said is that you have offered a recognition that mass incarceration has not worked, and that it is an unfortunate consequence of government practices that just didn’t work. But the truth is that there is an extremely long history of unfortunate government practices that don’t work that particularly affect Black people and Black families,.

Presumably, the "mass incarceration" refers to the Violent Crime Control and Law Enforcement Act of 1994, advocated by Mrs. Clinton and proudly signed into law by Bill Clinton.  Admittedly, we cannot be sure, given that there was no direct reference to the law, and the argument was made by the same individual who a moment later  would maintain "the mass incarceration system mirrors an awful lot like the prison plantation system."  (You probably never realized locking a guy up for a few years for profiteering from the sale of cocaine is the same as spending one's whole life as a slave.)

Nonetheless, many criminal justice reformers have honed in on the Clinton-era legislation, especially to denounce the vast increase in the prison population in the past two decades. The sane, sober, and insightful Andrew O'Hehir recently wrote

The aforementioned Violent Crime Control and Law Enforcement Act of 1994 (whose principal legislative sponsor, by the way, was Sen. Joe Biden) almost certainly did more to drive the boom in prison-building and mass incarceration than the policies of Richard Nixon, Ronald Reagan and George H.W. Bush put together. Furthermore, it epitomized the cynical Clintonite strategy of “triangulation,” which in this case specifically meant co-opting a core Republican issue while marginalizing or repudiating poor black people, the most vulnerable element of the most loyal Democratic constituency.

The Act very likely was fueled by political considerations, tamping down on GOP anti-crime mania, and was a prime example of Clintonian triangulation. Unfortunately, O'Hehir went further, maintaining

that the vast prison-industrial complex created by bipartisan consensus was brutal, corrupt and inefficient — to state the case in its narrowest possible terms. Many went on to observe that its principal product, and arguably its intended purpose, was a “new Jim Crow,” to borrow the title of Michelle Alexander’s groundbreaking study. In practice, mass incarceration amounted to the selective and systematic oppression of poor people in general and African-Americans in particular. It hardened patterns of enduring racial injustice and widening economic inequality.

O'Hehir deserves a break, if only because taking Michelle Alexander seriously is an occupational hazard of the leftist commentariat.  The notion that mass incarceration "hardened patterns of enduring racial injustice and widening economic inequality" is very much debatable, though one worth exploring in great detail, especially given BLM's virtual dismissal of economic inequality as a core element of modern America. However, if the purpose of mass incarceration was a "new Jim Crow," the perpetrators- focusing almost exclusively on lawbreakers- proceeded in a highly inefficient and preposterously stupid manner.

Nonetheless, Salon's title, "HIllary and Bernie at the prison gate; Mass incarceration is finally a hot political issue- if we want to save America we must seize the moment," is unnecessarily apocalyptic. Focusing instead on the silly theses of Michelle Alexander, however, would be unfair to the serious issue of incarceration and the opportunity for presidential candidates to address it. O'Hehir slams Hillary Clinton's

rhetorical turnabout on the issue of mass incarceration, including the fact that she now routinely utters those words aloud, is an important signal of the changing tide. Clinton vigorously supported her husband’s massive anti-crime bill of 1994, which provided almost $10 billion in prison funding, stripped state and federal prison inmates of the right to higher education, made gang membership a crime in itself (almost certainly a violation of the First Amendment), and implemented the infamous “Three Strikes, You’re Out” policy mandating life sentences for repeat offenders, even for certain nonviolent crimes.

Other provisions were not as progressive. Moreover, vastly increasing allocation of funds for police officers (to a lesser degree, other law enforcement components) as well as for prisons undoubtedly did result in the arrest, prosecution, and incarceration of more individuals. Building more prisons, though, has lessened overcrowding in prisons, a reality unacknowledged by either leftists or rightists, the latter of whom are often unmoved by punitive treatment of criminals.

But there is the matter of the complicated three strikes clause in the 1994 legislation. In a 1995 memorandum from the Assistant Attorney General to U.S. Attorneys, Jo Ann Harris explained

Under the federal "Three Strikes" provision, which is now codified at 18 U.S.C. § 3559(c), the defendant receives mandatory life imprisonment if he or she:

Under the statute, a "serious violent felony" includes murder, manslaughter, sex offenses, kidnapping, robbery, and any offense punishable by 10 years or more which includes as an element the use of force or that, by its nature, involves a significant risk of force. The statute also enumerates certain nonqualifying felonies, including unarmed robbery offenses and arsons that posed no threat to human life.

It appears, therefore, that (as interpreted by the Clinton Administration) "three strikes" is invoked when a defendant commits murder, manslaughter, sex offenses, kidnapping, robbery, or a major offense which threatens significant violence.  (Whether the enumerated offenses must be punishable by at least ten years to qualify is unclear.)    He or she previously must have committed a "serious violent felony" as well as two offenses, one which must have been serious and violent.  (The "serious drug offense" does not refer to mere possession.)

While this aspect of the law applies only to defendants found guilty of violating a federal statute, it probably proved the inspiration for similar laws in several states, in which the concept often was memorialized relatively broadly and resulted in more prison sentences than provoked by the federal statute.

Still, O'Hehir implicates both Democrats and Republicans when he writes "For at least 35 years, the only perceptible division between mainstream Democrats and Republicans on the prison issue was over whether we should simply build more and more prisons and stuff more and more people into them (the “moderate” view) or whether we should do that and hand the whole enterprise over to private, for-profit corporations." Given he criticizes Democrats as well as Republicans and does not specify any state laws, his primary focus is on the federal government.

In imprisoning defendants under "three strikes," federal prosecutors are not hounding the most altruistic members of society nor producing anything which would "mirror" a "prison plantation system," as members of BLM imagined.  There is little to suggest, in either their rhetoric or that of O'Hehir, that the individuals may be largely responsible for own their plight. The vast majority of these inmates are bad people;  in fewer instances, good people who simply have done bad things.

Severe punishment is just deserts for most of the individuals to whom the Violent Crime Control and Law Enforcement Act pertains. The difference, moreover, between imprisonment in public, and in private, institutions is not insignificant.  It is not an important distinction- or rather a critical distinction as, happily, the second leading contender for the presidential nomination of the nation's mainstream political party (AP photo from Christian K. Lee via Think Progress) understands. 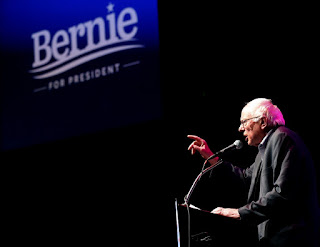