The neo-liberals, or at least one neo-liberal, at Vox are at it again. Dylan Matthews writes

So I was disappointed, if not surprised, at the visceral horror with which Bernie Sanders reacted to the idea when interviewed by my colleague Ezra Klein. "Open borders?" he interjected. "No, that's a Koch brothers proposal." The idea, he argued, is a right-wing scheme meant to flood the US with cheap labor and depress wages for native-born workers. "I think from a moral responsibility, we've got to work with the rest of the industrialized world to address the problems of international poverty," he conceded, "but you don't do that by making people in this country even poorer."

There are two problems with Sanders' view on this, one empirical and one moral. He's wrong about what the effects of an open-border policy would be on American workers, and he's wrong in treating Americans' lives as more valuable and worthy of concern than the lives of foreigners.

There are two problems with Matthews' view on this, one empirical and one not. Sanders is not wrong about the effects of an open-border policy on American workers, though Matthews maintains "even if there are losers for immigration, it should be possible to compensate them by redistributing money from the winners."  Yes, because everyone prefers a handout to a job.

Consider the political strength of Medicare and Social Security, which have survived onslaught precisely because they are earned benefits and not easily construed as welfare. It is why opponents repeatedly refer to them as "entitlements," understanding that if voters don't realize program benefits are earned, they will turn against them. (And it's why means-testing would doom the programs.)

I'm not kidding, this is what he criticized Senator Bernie Sanders for in a Vox piece today. He apparently views it as outrageous that Sanders, a candidate for the Democratic presidential nomination, doesn't think that the United States should open its borders so that every person who in the world who wants to come and work in the United States has the opportunity to do so.

On the one hand Matthews has a point, there is an injustice in that people who were born in the United States are able to enjoy a better and longer life than people who had the misfortune to be born in a poor country in Africa, Asia, or elsewhere in the developing world. On the other hand, it is hard to see that as a greater injustice than saying that people who were born in wealthy and educated families in the United States, that could give their children the wealth and social training to enjoy a high living standard, have a right to a better standard of living than children who were born to less privileged families. Of course these children of privileged families will benefit from having more less-educated immigrants in the country since it will mean they have to pay less for their nannies and to have their lawn mowed and their house cleaned.

Baker suggests a better road for addressing injustice when he explains

This problem can be solved much more easily than worldwide inequality. For example, let's eliminate the patent and copyright monopolies that redistribute so much income upward to these privileged children. Let's alter the licensing restrictions that ensure doctors and lawyers get outlandish pay. (We can use a lot more immigrants in these areas and the gains are large enough to have repatriations of a portion so that the home countries of these foreigners benefit as well.) And we can have the Fed not raise interest rates to keep the less privileged children from getting jobs.

Matthews doesn't realize the law of supply and demand is being played out right in front of our eyes, as the American economy features fewer adequate jobs than before, in part because there are a great many individuals waiting in line to take a job when, and if, it becomes available. One of the reasons for resistance to raising the minimum wage- which hasn't been increased in over six years- has been downward pressure on wages due somewhat to a surplus in labor.   Opening the USA's borders to the world would result in a dramatic rise in the supply of labor and existing low-wage workers would suffer.

Matthews is wrong, additionally, that the Vermont senator should be as concerned with the lives of foreigners than of the people of his own nation.  The latter is not running for Secretary General of the United Nations, nor is he auditioning to be appointed to head the worldwide Roman Catholic Church, whose leader probably will address the issue in September in a manner satisfying to Matthews. Senator Sanders is hoping to become President of the United States and in that capacity, Americans are the most important people in the world.

Preparing for an interview at the Onion, Matthews argues

Even if you think this makes sense, it doesn't make restricting immigration acceptable. Privileging the interests of Americans doesn't mean that US policymakers have the right to needlessly hurt foreigners. Not even the most ardent nationalist would say that the US has a right to, say, massacre 10,000 foreign civilians to save a single American life. And make no mistake: Using force to restrict access to the United States hurts foreigners dramatically.

Who are these 10,000 foreign civilians massacred to save a single life? Matthews may mean this hypothetically. However, in a sleight-of-hand he then warns "and make no mistake: using force to restrict access to the United States hurts foreigners dramatically," which suggests he is not speaking hypothetically.

Some folks would would refer to the US Border Patrol (photo of one vicious, homicidal agent below) as "using force to restrict access to the United States."  That is, however, not unlike claiming a local police department uses force to prevent crime.  The police enforce local and state ordinances; the border patrol enforces a semblance of sovereignty and in so doing, admittedly, disadvantages individuals who would violate the laws of the nation they want to be let into.  The threat of force is not the same as the use of force. 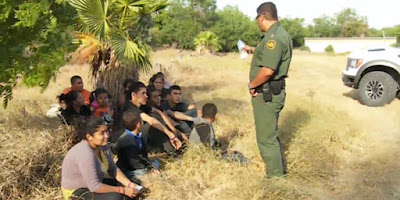 Dylan Matthews believes "Bernie Sanders is obligated to weigh the interests of a poor potential Nigerian immigrant equally to those of a much richer native-born American." No, not a poor potential Nigerian immigrant, who is a Nigerian and not an American. The obligation of an American politician toward another nation's citizen is typically limited to egregious injustices, such as the anti-homosexuality act in Uganda.

Once an immigrant  enters the country legally, the obligation of an American politician rises exponentially.  In the meantime, Bernie Sanders is obligated to weight the interests of a poor American as against a rich American- and he is doing that quite well.  As Baker concludes, "we all have to decide for ourselves which injustices we find most worth fighting."