Checking In On Carly


At the presidential debate in Milwaukee, Carly Fiorina slipped up, neglecting to insert into her responses any whoppers even approaching the order of magnitude of her Planned Parenthood whopper.

Still, the failed businesswoman managed in one response to contribute two truly awful recommendations, one picked up by the Center for American Progress and the other traveling under the radar.

Oh, she did actually avoid answering "If you win the nomination, you’ll probably be facing a Democrat named Clinton. How are you going to respond to the claim that Democratic presidents are better at creating jobs than Republicans?" However, most responses of the other candidates (Rand Paul often an exception), as well as of Fiorina, focused on a variation of their stump speech.

The question posed is a particularly knotty one for Republicans because, as this comparison to January, 2015 indicates (chart below from the Bureau of Labor Statistics)

An overall gain of 6.4 million more non-farm payroll jobs last month than in January 2009, which represents a 4.8% increase. All of that growth came from the private sector, while the public sector shrunk: Private payrolls have added 7 million jobs over Obama’s presidency, while government payrolls (federal, state and local) have contracted by a combined 634,000 jobs. 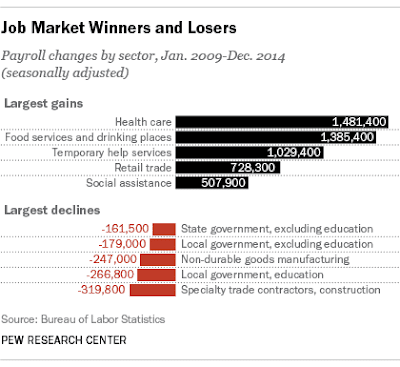 Since then, private sector employment has only grown. but Fiorina can be forgiven for claiming "this government has been growing bigger and bigger, more corrupt, less effective." "Less effective" is merely an unsubstantiated, subjective judgement and "more corrupt" is also subjective, albeit ludicrous.  And whatever the facts, Republicans also typically charge Democrats with creating "bigger" government, facts be damned, not unlike the portrayal (one, below) in TV commercials.

Fiorina's prescription for business de-regulation, however, is terrible, as explained by ThinkProgress' Todd Legum:

“We need to pass the REINS Act so Congress is in charge of regulation,” Fiorina told the debate audience, referring to an obscure bill intended to hobble federal agency action. Though it is unlikely that many people in the audience know what the REINS Act is, this bill has long been one of the top priorities of the U.S. Chamber of Commerce — the primary lobbying group representing big business as a whole. Moreover, the bill has a fairly high chance of becoming law if Republicans gain control over both houses of Congress and the presidency. The bill passed the GOP-controlled House on multiple occasions.

REINS is a general attack on federal regulatory system. Congress often passes laws that delegate authority to federal agencies to work out the details of relatively broad policy objectives set by federal statutes. The Clean Air Act, for example, requires the Environmental Protection Agency to set “standards applicable to the emission of any air pollutant from any class or classes of new motor vehicles or new motor vehicle engines” if the EPA determines that those emissions “cause, or contribute to, air pollution which may reasonably be anticipated to endanger public health or welfare.”

There are many reasons why Congress may wish to delegate authority in this way. The EPA employs scientists and policy experts who have far more expertise in motor vehicle emissions than members of Congress, so the EPA is more likely to make educated judgments about the details of environmental policy. New studies may reveal that a particular emission that was previously viewed as benign is actually far more dangerous — or they may reveal the opposite, that a chemical once viewed as dangerous is actually much less so. The Clean Air Act permits the EPA to respond relatively nimbly to these developments rather than having to push through new legislation every time a researcher publishes new data that should inform regulators. Similarly, EPA regulators can adapt to new technological developments, encouraging the use of certain technologies while relaxing standards related to others as new ways of reducing emissions are discovered.

REINS, however, would effectively lock much of the federal regulatory system in place. Under this bill, any new regulation that has an “annual economic impact of $100 million or more,” an amount that seems large, but that actually amounts to less than 0.0006 percent of the U.S. economy, must be approved by Congress or else it does not go into effect. Moreover, the bill provides that if Congress does not act “by the end of 70 session days or legislative days . . . then the rule described in that resolution shall be deemed not to be approved and such rule shall not take effect.”

The United States, of course, has a Congress that can barely decide whether to fund the government or avoid a catastrophic debt default. So it’s easy to imagine what would happen if Congress were given a tight deadline to approve dozens of tweaks to America’s regulatory structure every year. Changes to that structure would, for the most part, cease to exist.

As part of the same response, and immediately presenting the REINS idea, Fiorina maintained "we need to actually reform the tax code. Go to a three-page tax code. Yes, there are plans that would reform our tax code to three pages."

Usually when this zombie concept is presented, it is as "go to a single-page" (or two pages, it really doesn't matter) "tax return" with the proviso that all deductions are eliminated.  In general circulation, this idea wouldn't fly, if only that removing the deduction for interest paid on a home mortagage would prove rather disconcerting.

Two months ago, a highly skeptical Forbes contributor, explaining the inevitable complexity of tax law, remarked "I’m really looking forward to the Fiorina campaign releasing the three-page tax code that the candidate is proposing."  However, even in the extremely unlikely event all deductions were eliminated in the new code, Politics 201 would demand that they return. Neither Comcast, FedEx, Goldman Sachs, AT&T, Exxon Mobil, the NRA or (virtually) any other corporation would accomodate the public by firing all its lobbyists and accept an inhospitable tax code.  Not going to happen.

The beauty of Carly Fiorina, however, is that she was too slick to go there. She said merely "go to a three-page tax code," one which could easily include something like "Nothing in this legislation shall be construed to eliminate, repeal, or modify any existing preference."

Kudos to Todd Legum for focusing on the danger in the candidate's dream of eliminating consumer and worker protections.  But she is so shifty and shameless, it would take the classic infinite number of monkeys typing for an infinite amount of time to come up with her next harebrained scheme. And have I mentioned how loathsome Carly Fiorina is?