Give me a break.

Context and exact wording are important, so it's hard to evaluate remarks made at a meeting without having the transcript. But that won't stop me.

It's never a good idea, thoughtlessly and without ulterior motive, to insult your guests. Insults should not be used without a tactical motive (see Trump, Donald). Fittingly, it was the appearance as host of Donald Trump on NBC's Saturday Night Live (nee Saturday Night) which precipitated a meeting of the Congressional Hispanic Caucus with MSNBC and NBC news executives. However, Politico reports

NBC News President Deborah Turness committed a major blunder — as far as the Hispanic lawmakers were concerned — when she described undocumented immigrants as “illegals," a term that many in the Latino community find highly offensive.

Turness was describing NBC's integration with their Spanish-language network Telemundo, which included coverage of Pope Francis’ visit to the U.S. and his interaction with a young girl who was afraid her parents would be deported because they’re “illegals.”

“I’m going to stop you right there. We use the term undocumented immigrants,” Rep. Juan Vargas (D-Calif.) interrupted.

"Illegals" is a derogatory term, not the least because it's a word manufactured to express disdain for those whom the CHS refer to as "undocumented immigrants."  The individuals are people, therefore deserving to be reffered to with a noun rather than an adverb.

The word "undocumented" purposely obscures the status of the individual, the effort to enter the country illegally. It wipes out the distinction between legal and illegal, between Bill Clinton's "work hard and play by the rules" (emphasis mine) and the others. "Undocumented" implies instead a failure of faceless bureaucrats who simply couldn't, or wouldn't, come up with the documents needed by the deserving.

But we've lived with clever marketing, the art of the spin, in the political sphere for some time now, thanks in large measure to Frank Luntz. He has taught Republicans to say "exploring for energy" instead of "drilling for oil"; "international trade" rather than "foreign trade"; "Washington" instead of "government"; and my favorite, "death tax" instead of "estate tax." In a stranger argument made at the meeting, (Florida US Representative Tony) "Cárdenas argued that if Trump — who has made a series of remarks about Hispanic immigrants, including calling them 'rapists' — said similar things about African-Americans or Jews, NBC would not have had him on the show."

The obvious distinction is that African-Americans- and the Jews of whom Cardenas speaks- are Americans (first hint: African-Americans).  The Hispanic immigrants of whom he speaks are entering the country illegally.   If blacks and Jews from another nation were doing so, there also probably would be an outcry.  Though there is nothing strictly analogous, a similar situation is now playing out, as we read elsewhere in Politico

Since the Paris attacks, thirty Governors have declared their opposition to resettling Syrian refugees within their states. New Jersey’s Chris Christie, Georgia’s Nathan Deal, Illinois’s Bruce Rauner, and several others have stated flatly that their states will not accept new Syrian refugees.

Fortunately, it's only governors (almost all of them Republican), whose loyalty must be to the citizens of their own state, who are putting up a roadblock. Yet, according to a separate article in Politico (from which photo below is taken)

Less than a week after terrorists killed more than a hundred people in Paris, the House is set to approve a bill Thursday that would block refugees from Syria or Iraq from entering the country unless they pass strict background checks.

The bill will see near unanimous support from Republicans and broad support from Democrats - even as the Obama administration makes a last minute pitch to convince on-the-fence House Democrats to oppose the GOP-written bill.

The legislation requires the director of the FBI to vouch for the completion of a background investigation on each refugee, as well as to certify to Congress that they are not a security risk. The Secretary of Homeland Security and the Director of National Intelligence would also be required to certify to Congress that individual refugees are not security threats. And the bill stipulates that Homeland Security officials submit monthly and yearly reports to relevant congressional committees about the program. 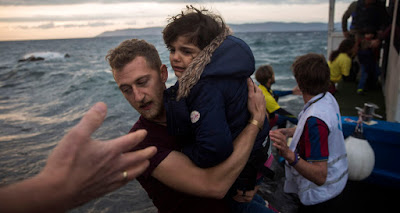 Although this promotes a more intrusive federal government, the GOP has long ago given up- except rhetorically- the idea of small government. (See abortion, same-sex marriage, spying on citizens, the Pentagon.) The GOP-sponsored bill and its requirements are unnecessary because

Syrian and Iraqi refugees are already the most heavily vetted category of people to enter the U.S., the subject of an intensive process that lasts an average 18 to 24 months. Their screening already includes background checks by the FBI and DHS, and seven other federal agencies, Administration officials say.

Syrians are different, one might argue, because of the threat of terrorism. Yet, nativism is not uncommon in the land, as Jamelle Bouie explains

You saw it in the late 1930s, when Americans faced Jewish refugees from Nazi Germany, and had to choose: Would we take the victims of Hitler’s anti-Semitism, or reject them? On the question of refugee children, at least, Americans said no: 67 percent opposed taking in 10,000 refugee children from Germany, according to a 1939 poll from Gallup.

They were similarly unmoved by earlier groups of Jewish refugees, and their fears evoked the anxieties of their predecessors in 1848 and beyond. Americans, and their counterparts in Western Europe, feared foreign influence and dangerous ideologies like communism and anarchism. (Just a few decades earlier, in the living memory of many adults at the time, an anarchist killed an American president.)

Again and again, when faced with the question of refugees and immigrants, Americans are ambivalent and sometimes hostile. In 1975, for example, 62 percent said they feared Vietnamese refugees would take their jobs. Four years later, just as many said they didn’t want to admit “boat people” from Vietnam, who were fleeing the country’s repressive communist government. Americans said the same for Cuban refugees in the 1980s, Haitians in the 1990s, and most recently, the wave of refugee children from South America, which brought protests and fears of disease and infection.

You can even apply this dynamic to the Great Migration, the huge movement of black Americans from the South to cities and towns across the country. These Americans were internal refugees, fleeing lawlessness and racist terrorism. When they reached their destinations—cities like Detroit and Chicago—they faced deep hostility from existing residents, who blamed them for crime and economic disadvantage.

Oh no, it would  happen only to "undocumented" hispanic immigrants. It would never happen to blacks and Jews- except it already has.