Hardly A Dime's Worth Of Difference

Jack Mirkinson believes the appearance Saturday night of Donald Trump on Saturday Night Live is "a notable and rather strange intervention by 'SNL'" because politicians (aside from the hapless Al Sharpton in early 2003) have hosted the NBC program only between campaigns.  Writing before the show aired, Mirkinson argued Trump's campaign "long since crossed the line from entertainment into serious reality."  He cites the candidate's "toxic" comments about Latinos, "tacit acceptance of anti-Muslim racism," and "openly bigoted birther crusade."

Although aimed at SNL, Mirkinson's piece is only one which has implied that the presidential candidate and his philosophy are significantly more malignant as those we have recently witnessed from mainstream Republican conservatism.

The difference, however, is les than meets the eye.  One does not have to recall Mitt Romney's infamous "47%" comment to recognize that most American presidential elections, traditionally, have been decided less on a cultural or foreign policy basis than on an economic one, defined broadly. After considering the analysis by the "left-leaning but independent" Citizens for Tax Justice and the conservative Tax Foundation of the tax proposal of the mainstream and most likely GOP nominee, Jonathan Cohn summarizes

Estimates have suggested that Rubio’s tax cut would increase deficits by anywhere from $4 trillion to $12 trillion over 10 years, depending on how you count. Either way, it’d be a staggering amount of money -- so staggering that even prominent conservatives have blanched at the price tag. But according to the CTJ analysis, the poorest one-fifth of the country would keep just 6 percent of the money while the bottom 60 percent, as a whole, would get just 22 percent. By contrast, the richest 5 percent of Americans would pocket nearly half of the tax cut while the richest 1 percent alone would receive more than one-third.

Keep in mind that, in the real world, the poor’s share of the tax cut would probably be smaller than either the CTJ or Tax Foundation analysis suggests. That’s because Rubio campaign officials have said they would limit the refundable tax break to people who are working....

Whatever the details of the refundable credit, the bottom line is clear. If enacted, the bulk of the money in Rubio's tax cut would go to the affluent and a huge chunk would go to the very richest of the rich. Meanwhile, the loss of so much revenue would require some combination of higher deficits and deep cuts to government programs, most of which disproportionately benefit the poor and middle class.

According to CTJ's numbers (graphs below via Dylan Matthews of Vox), the cuts proposed by Trump and John Ellis Bush would jack up the deficit only slightly less than those proposed by the Florida senator. Rubio's plan would deliver more handouts to the very wealthy, slightly more for the poor, and less for middle-income taxpayers. 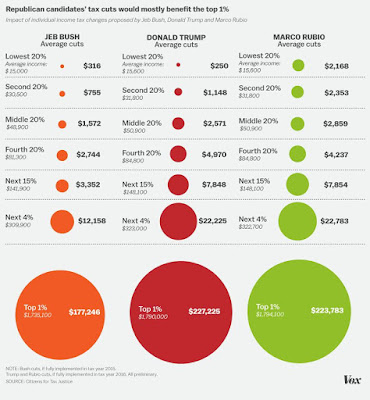 Tweedle-dee, tweedle-dum.   Two and a half months ago, Salon's Conor Lynch concluded "the scary thing is that America would probably be better off with a president Trump than any of the other major GOP contenders, who are either puppets for their corporate masters or wholly controlled by their dogma (i.e. Mike Huckabee’s Christian chauvinism)."

And then there is the current leader- Dr. Ben Carson- in national and Iowa polls. He wants to eliminate Medicare (video, below). Three days ago, Charlie Pierce described how as Mannatech Corporation's most famous shill, Carsib is in a long line of  of snake-oil salesman in the USA. Politically

The process began with Ronald Reagan, the greatest patent-medicine salesman of them all. It was he who marketed the economic snake-oil with a wink and a smile. It was he who taught them how to flex and pose – fiercely denouncing terrorism while selling missiles to the mullahs. It was he who gulled the country with tales of Sandinistas driving jeeps across the Rio Grande, and dangerous Cuban adventurism in Grenada, while Marines were being slaughtered in their barracks. He was the best show in town. The starstruck rubes flocked to see him. The country swallowed the swamproot whole.

Donald Trump at least at one time opposed the Iraq War, opposed cuts to Social Security and Medicare, and supported universal healthcare.  Having taken in with the wrong crowd, he now competes with the rest of the GOP field to prove he is the most extreme of them all. He has a lot of people convinced, but he really is just of a piece of what the Republican Party has become nationally.