Illegal Must Be A Racist Term


"People who work hard and play by the rules shouldn't be poor," the aspiring presidential candidate maintained.  As President, in a September, 1993 radio address the self-styled man from Hope (who also could be Mike Huckabee) would reiterate "the idea that if you work hard and play by the rules, you'll be rewarded with a good long life for yourself and a better chance for your children."

It was a common theme for Bill Clinton in Johnstown, Pa. when he was running for the job held by GHWB and asserted "The idea that if you worked hard and played by the rules you'd be rewarded, you'd do a little better next year than you do last year, and your kids will do better than you — that idea has been devastated."

Martin O'Malley evidently would like to rework that theme to something along the lines of "if you don't play by the rules, we'll reward you by recognizing you as a New American." O'Malley was distressed that an appeals court had refused to lift the order which blocked implementation of Deferred Action for Parents of Americans and Lawful Permanent Residents, as well as the Deferred Action for Childhood Arrivals policy.The Dallas Morning News reports

A family of mixed-immigration statuses welcomed Democratic presidential candidate Martin O’Malley into their Austin home for lunch Thursday to discuss the personal impacts immigration policies have had on them.

Over homemade chilaquiles, beans, potatoes and salsas, the Ramirez family told O’Malley how they came to America illegally when their children were young, and have lived in fear ever since. The youngest daughter, Abigail, is the only Ramirez child born in the U.S. At 13, she said she worries every day about coming home to an empty house.

“I hear people say, ‘Well, I’m glad that they’re going to deport all of these people,’” Ramirez said. “But how would you feel if you came home one day and no one was there—an empty house? And you think, ‘Oh, they just went out,’ but after hours and hours of waiting they never come back.”

During and after the meal, which O’Malley said was the best he’d had on the campaign trail, he tried to distinguished himself as the most compassionate candidate when it comes to immigration reform. He accused his fellow Democratic candidates Hillary Clinton and Bernie Sanders of “talking out of both sides of their mouths.”

He said Clinton has played a “sort of cynical game, where you say one thing to one crowd and use the term ‘illegal immigrants,’ and then turn around to another crowd and switch your messaging and talk about ‘new Americans.’ I always say ‘new Americans,’ O’Malley said.

O'Malley was therein given the benefit of the doubt with the printing of "new Americans" instead of "New Americans."  In de facto assurance that he was manipulating the language to make a radical ideological point, before the gathering the former Maryland governor had tweeted "Looking forward to meeting the Ramirez family & sharing a meal w/ a New American family that can show us how #DAPA is good for our country." He has called such persons also "new American immigrants," thereby granting them a designation apparently not earned by legal immigrants (naturalization ceremony in Grand Canyon, below, from Yahoo images).

There might be a reason, other than cynical politics, that Hillary Clinton sometimes refers to certain individuals as "illegal immigrants." The US Code actually refers (promiscuously) to persons in the country contrary to law as "aliens"- even in "The Illegal Immigration Reform and Immigrant Responsibility Act (IIRIRA" enacted on September 30, 1996.

"Alien" is a little harsh and a little misleading, given that the grayish, skinny guy didn't land here in an extraterrestial flying object from some other galaxy. "Immigrant," however, is what the "New American" is, and he or she is here illegally. That makes her an "illegal immigrant," which should be obvious to anyone who passed junior high school English.

The rhetoric should not be surprising, however, coming from someone who chose to dine with a family here illegally rather than legally, depriving legal immigrants of that honor. When Bill Clinton was speaking in Johnstown 23 years earlier, he was talking to struggling families, many of which still are struggling or have been replaced by those that are. Here legally, they presumably are "Old Americans" and not afforded the privilege of being exalted by O'Malley as "New Americans."

There are real questions about Hillary Clinton's electability, about her foreign policy hawkishness and connection to Goldman Sachs, support for "free trade" pacts, and on and on and on. Even her advocacy of reproductive freedom- yes, even for reproductive freedom- needs to be questioned, given Clinton's long-held support for "safe, legal, and rare" and the Supreme Court's acceptance of a case from the state specializing in targeted regulations of abortion providers. Yet, Martin O'Malley has chosen to focus on Mrs. Clinton's imperfect advocacy of illegal immigration. Pitiful. 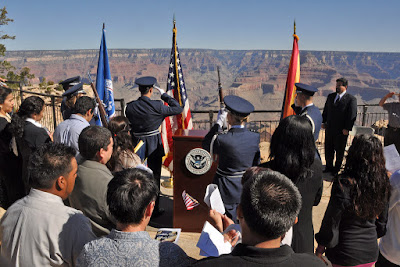