Sometimes, Not So Tough

There are a few questions which can be answered by politicians in only one way. Is President Obama a Christian and was he born in the United States? The answer is yes, and not "I don't know" or "I have no reason to believe otherwise."  Another is "do you believe climate change is real?" The answer is "yes," not "I am not a scientist."

Another was prompted when Donald Trump yesterday claimed

Now, I know they don't like to talk about it, but it was well covered at the time.

There were people over in New Jersey that were watching it, a heavy Arab population, that were cheering as the buildings came down. Not good.

This would be a great, albeit disturbing, story if it had happened. Fortunately, it did not, and Politico's Nick Gass notes

Stephanopoulos noted twice during their interview that police have said that it did not happen, and The Washington Post, in its Sunday evening fact check, noted a Sept. 18, 2001, article in the Star-Ledger that called “rumors of rooftop celebrations of the attack by Muslims here proved unfounded.”

In response to the paper’s initial article, the Post’s Glenn Kessler noted that several people had tweeted to him a Post article from the same day, which reported that “within hours of two jetliners' plowing into the World Trade Center, law enforcement authorities detained and questioned a number of people who were allegedly seen celebrating the attacks and holding tailgate-style parties on rooftops while they watched the devastation on the other side of the river.”

The Post's report did not give an exact count on the number of people allegedly seen celebrating the collapse, though no known video footage exists, and Trump claimed he saw it on television.

The Democratic mayor of Jersey City, NJ (who is considered a likely candidate for his party's nomination to succeed Governor Chris Christie) tweeted "Either @realDonaldTrump has memory issues or willfully distorts the truth, either of which should be concerning for the Republican Party."

It's good to call out Trump for making this out but it shouldn't be only Democrats- and it shouldn't be only Trump who is fingered. We know who and what Donald Trump is, and the adjectives haven't been invented yet to describe him fully, though in his ridiculousness he still makes no less sense than his rivals for the Republican nomination.

NJ reporter Brent Johnson writes about the response of a guy who is wrong about most things but certain about everything:

"I don't recall that. I don't," Christie — who is running against Trump for the 2016 Republican presidential nomination — told reporters while on the campaign trail in New Hampshire.

"It was a pretty emotional time for me because, as I've mentioned before, there's family involved, there were, you know, friends involved and so it was a pretty harrowing time," he said. "I do not remember that, and so it's not something that was part of my recollection. I think if it had happened, I would remember it, but, you know, there could be things I forget, too."

Paraphrased, Christie is saying "I don't recall that but, oh gosh, I have such a bad memory."  The correct answer, however, is quite clear. "Trump is wrong" or as Tom Brokaw- usually of "the both sides do it" set- asserted "Trump is completely wrong."

If  even Tom Brokaw can say it, the governor of New Jersey can say it. Christie wasn't being asked to contradict Marco or Ted, one of whom he will have to heap praise upon once he is about to be nominated. It is Donald Trump, who has called staunch conservative columnist and pundit Charles Krauthammer a "clown," fellow Republican Ben Carson "pathological," and charged Hillary Clinton "can't satisfy her husband." And those are the things he has charged which may at least have a grain of truth.

But it's Chris Christie, who has called teachers "drug mules" and said teachers' unions deserve "a punch in the face,"  tried to provoke a fight on the boardwalk, and told someone else at the Jersey Shore to "sit down and shut up." Big, bold, and brash Christie now says "I would remember it but, you know, there could be things I forget, too."

This is significant because as the cartoon below from John Cole indicates, the appeal of the GOP does not include fear or misinformation. It is dependent upon it, and Governor Christie, former "moderate" hearththrob of the mainstream media, is as reluctant as almost any Republican candidate to challenge it.

Full of bluff and bluster, Chris Christie himself knows when to shut up, and that's when he's intimidated by someone like Donald Trump. 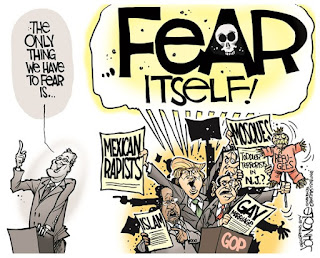