With $550 of his own money, Harris County, Georgia Sheriff Ned Jolley purchased a sign (photo from Fox News via Salon), which he later placed in front of the Harris County Sheriff's Department office, reading (emphasis and spacing his)

WARNING: Harris County is
politically incorrect. We say: Merry Christmas,
God Bless America and in God We Trust.
We salute our troops and our flag.
If this offends you... LEAVE! 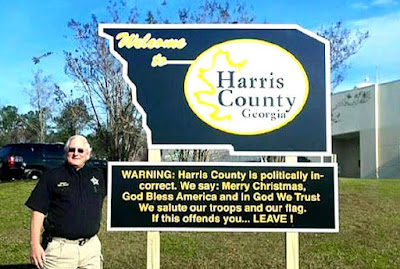 Well, that's the spirit. Or rather, that's the SPIRIT! There is nothing that says courage, political or otherwise, more than coming out foursquare in favor of the flag, the troops, God, and Christmas- all the while sporting a Sheriff's Department badge and a gun holster.

The irony is that the political incorrectness the Constitution-averse Jolley sports is the essence of political correctness.  Salon's Scott Eric Kaufmann points out that the American Humanist Association- which most Americans probably never have heard of- has complained.  So has.... evidently no one else yet.

Wayne Hazzard, chairman of the Hanover County Board of Supervisors, skipped the customary invocation ahead of Tuesday’s meeting and asked fellow board members to indulge him, reported the Richmond Times-Dispatch.

“As we celebrate Thanksgiving this week, I think it appropriate that we continue to remember the reason that this great nation was formed and by whose grace it continues to survive,” Hazzard said, reading from a statement. “Christians who formed our nation celebrated days of thanksgiving to God. The Jamestown and Plymouth colonists recognized that they were sustained only by God’s providence and celebrated Thanksgiving feasts.”

The elected official pointed out that the first three U.S. presidents issued proclamations asking Americans to express thanks to God, and each president since Abraham Lincoln has issued annual Thanksgiving proclamations.

“These days of an enemy from outside of this country, as well as people from within, who would attempt to remove all recognition of God from public life, we offer this proclamation as a reminder that the United States has always acknowledged our nation … is dependent on God’s grace and providence,” he said.

Hazzard proposed a resolution urging Hanover County residents to pray at Thanksgiving, and the board adopted it.

Hazzard's proclamation probably runs afoul of the First Amendment. It also is misleading, in that few people are trying "to remove all recognition of God from public life," and offensive in equating ISIL and American citizens.

More significant, however, is that criticism of Hazzard's words seems to be limited to the American Civil Liberties Union, which consistently calls out words and actions it believes antithetical to the Constitution. From politicians we hear.... silence.

Some things are still off-limits in polite society. (This excludes those comedians whose livelihood is dependent on stretching the boundaries.)  No one may question people who would attribute the USA's greatness to God, a common tendency on the right, except when debating defense budgets, when a mere $650 billion Pentagon budget is all that stands between us and obliteration. Were the commitment to "the troops" as complete as to the military, funding for veterans' programs wouldn't face the opposition it does, and ordinary Americans wouldn't be compared to terrorists.

When the likes of Ned Jolley advocate assistance for veterans and recognize that "Merry Christmas" is being discarded by major corporate retailers, their whining will deserve to be taken seriously. Not before.