After the US Supreme Court decided in June that states could not prohibit same-sex marriages, Court Clerk Kim Davis (photo D. Easley/AP) of Rowan County, Kentucky refused to sign any marriage licenses.  She was arrested and put into jail while deputy clerks, replacing Davis' name with that of the county, issued licenses, same-sex and otherwise. Davis was released as federal Judge David Bunning ordered that she

Davis was released with what seemed like bold words from the son of former US Representative (and Hall of Fame pitcher) Jim Bunning (R-Ky), who was Ted Cruz before Ted Cruz.   However, if at the time you noticed a loophole in the Judge's order, you deserve to dive into the Halloween candy you had resisted. As Reuters reported, "she removed her name, title and personal authorization on the licenses. A deputy clerk has issued licenses since her jailing in early September."  And if you foresaw that a Kentucky governor would drive a wedge through that loophole, you deserve even more because

Two months after a county clerk in Kentucky became a national figure and was jailed for refusing to grant marriage licenses bearing her name to same-sex couples, the state’s governor-elect said Friday that soon after taking office, he would order new licenses that do not have clerks’ names, a change that would address one objection raised by opponents of same-sex marriage.

Lawyers for Kim Davis, the clerk in Rowan County who has said that same-sex marriage violates her Christian beliefs, have argued that forcing her to issue licenses with her name on them violated her rights by suggesting that she endorsed the unions. The courts have not agreed, but lawmakers have said the conflict could be resolved by altering the licenses.

“One thing I will take care of right away is we will remove the names of the county clerks from the marriage forms,” Matt Bevin, the Republican governor-elect, said Friday at a news conference at the State Capitol in Frankfort.

It makes sense in a Machiavellian sort of way.  The right gets what it wants, vindication for a high-profile opponent of gay marriage and a roadmap for eroding marriage rights in other states. Most gay couples in Kentucky still have what they yearned for, equality with married couples in their state.

Even Chris Hayes was mollified and remarked

As a strong supporter of marriage equality myself, I think this is a perfectly fine solution. If this is what that accommodation comes to, fine. No one cares if some county clerk`s name is on their marriage license anyway.

People get married, want to see their own name on the marriage license, along with the name of the one they love. If everyone can now go back to work and we can all move on, then way to go, Matt Bevin.

Chris Hayes is deluding himself if he thinks he still is a strong supporter of "marriage equality." Same-sex marriage (as with traditional marriage) in Kentucky is no longer on the same footing as marriage in the 49 other states.

Civil unions, as reflected in changing perspectives and laws, had been gaining ground in the USA prior to the court's ruling. However, even though actual rights and benefits were equal (or nearly so), supporters of same-sex marriage were unimpressed because civil unions left gay couples with something different than heterosexual couples.  The arrangement was not necessarily inferior- but it was different.  Hence, it was unacceptable- or so we were led to believe.

There is also some doubt as to whether the licenses are valid, though Bevin (who will assume office December 8) labels the belief the governor cannot change the marriage form unilaterally "baloney. We will do that by executive order. We will do that right out of the gate."

Issuing an executive order "right out of the gate" (at least he didn't say "on Day 1") takes some nerve for Bevin, who has maintained "President Obama's executive order on amnesty is an unconstitutional overreach by his administration."  Still, it may prove a slick option for a guy with as much regard for the rule of law as Judge Bunning, whose order now appears toothless. The incoming governor has decided not to assert that government employee Davis must comply with both the spirit and the law of the Supreme Court's order.

It is possible such an executive order by the governor of Kentucky will not be overturned. Decisions by many courts are erratic and reflect questionable judicial temperament.  (Justice Kennedy in Obergfell: "Marriage... allows two people to find a life that could not be found alone.")  However, it is a gutless move by a chief executive who should insist upon the rule of law by telling the Court Clerk to obey the letter and the spirit of the US Supreme Court.

In not doing so, Kim Davis is engaged in dereliction of duty and should do the only honorable thing: resign. Otherwise, though  Chris Hayes may not realize it, Mr. Bevin surely understands Kim Davis has stood up to the US Supreme Court and the same-sex marriage movement. And won. 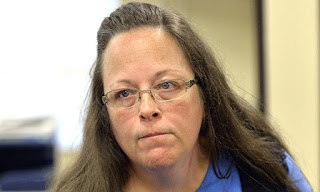