The Supreme Law Of The Land


When Marco Rubio dies and faces God (not Saint Peter), he will reply:  "I was only trying to keep up with Ted Cruz."

Cruz is making inroads with evangelicals, well ahead of his ultimate confrontation with Rubio. Meanwhile, Marco Rubio is a class-A extremist, as displayed when in an answer to a question from the Christian Broadcasting Network's David Brody, he commented

We are clearly called, in the Bible, to adhere to our civil authorities, but that conflicts with also a requirement to adhere to God’s rules. When those two come in conflict, God’s rules always win.

Digby remarks "I'm glad he brought that up. Because tons of people are trying to stop good God-fearing Americans from preaching the gospel and trying to force them to "perform same-sex marriage as someone presiding over it" and he needs to draw the line. "

We can only hope Marco does not eat shrimp because God- through Moses in Leviticus- prohibits us from "eating... any seafood without fins."  And he better lay off that juicy hamburger because, in the same book, God warns us to "eat neither fat nor blood.”  And he better stick to watching football on Sunday because "the seventh day is a Sabbath of solemn rest, a holy convocation. You shall do no work." Such are God's rules we must adhere to.

Reminded that he seemed to be endorsing Kim Davis, Rubio continued

So in the absence of that,however, then it depends on what kind of society you live in. If you live in a society where the government creates an avenue and a way for you to peacefully change the law, then you're called to participate in that process to try to change it, not ignoring it, but trying to change the law. That's what we're endeavoring to do here and I continue to believe that marriage law....

Rubio did not therein indicate what we're to do while trying to change statute that conflicts with God's law, but if "government is compelling us to sin," presumably we are to refuse to obey the law. That was the way of Kim Davis.

A few thousand miles away, several governments are determined that their laws do not conflict with God's law (as it is understood).  Recently, a Palestinian poet and Saudi citizen learned what it means to violate God's law in a society dominated by Sunni Islam. Sentenced by the Kingdom's court to four years in prison and 800 lashes for renouncing Islam, he appealed, whereupon he was sentenced to death.

That principle is not unknown in Islam of the Shiite variety, also.  "The idea that the ruler of the state must be the person best qualified to interpret Islam and enforce Muslim law upon the people," Frederick W. Kagan of the conservative American Enterprise Institute has written, "is enshrined in the constitution of the Islamic Republic."  That would be the Islamic Republic of Iran (cartoon from Google images),where God's law is supreme to any constitution, and a nation otherwise feared by Marco Rubio.

The Florida Senator believes we must fight abortionand same-sex marriage because they conflict with God's law. The mullahs in Teheran would heartily agree. 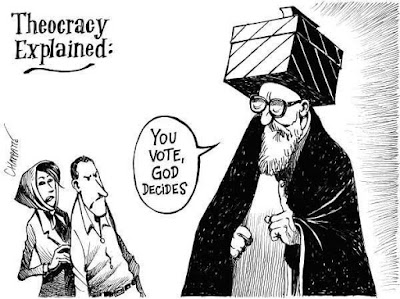