Salon's Valerie Tarico informs us that in Missouri, the Satanic Temple (which seems not to believe in Satan)

has waded into the reproductive freedom fight by filing suit on behalf of a member, “Mary Doe,” who says she is entitled to religious exemption from odious abortion restrictions. The Temple’s “Seven Tenets” include two that provide the basis for the court case: One’s body is inviolable, subject to one’s own will alone—and—Beliefs should conform to our best scientific understanding of the world. Lawyers for the Temple argue that forcing Doe to read scientifically bogus warnings against abortion (for example, that abortion causes cancer) and then contemplate the warnings for three days prior to the procedure violates her religious freedom. Once again, the Temple is crowdfunding the campaign and to date has raised about half of the anticipated $80,000 in legal costs.

Here is hoping the Satanic Temple gets its money.  The outfit, of course, is far less interested in reproductive freedom or the (federal) Religious Freedom Restoration Act than it is in establishing the principle that "it’s unacceptable to give (privilege and exemption) only to people who believe in the supernatural." It should be unacceptable to give privileges to anyone on the basis of religious belief but the Religious Freedom Restoration Act, with its all-but-inevitable loose interpretation, encourages preference. (Cartoon below, in response to Indiana RFRA controversy, is from Mike Thompson of the Detroit Free Press.)

When a Reserved Army Training Corps ordered an applicant to shave his beard, cut his hair, and ditch his turban, the American Civil Liberties Union, citing the RFRA, filed suit on his behalf. The plaintiff prevailed in a decision unavoidable because individuals of other cultures had been given exemptions to the Corps' policy.  Then, however, came the Court's noxious Hobby Lobby decision, and the ACLU got religion (figuratively, obviously). Deputy Legal Director Louise Nelling then wrote

The ACLU supported the RFRA’s passage at the time because it didn’t believe the Constitution, as newly interpreted by the Supreme Court, would protect people such as Iknoor Singh, whose religious expression does not harm anyone else. But we can no longer support the law in its current form. For more than 15 years, we have been concerned about how the RFRA could be used to discriminate against others. As the events of the past couple of years amply illustrate, our fears were well-founded. While the RFRA may serve as a shield to protect Singh, it is now often used as a sword to discriminate against women, gay and transgender people and others. Efforts of this nature will likely only increase should the Supreme Court rule — as is expected — that same-sex couples have the freedom to marry.

Good thinking.  The RFRA prohibits government from "substantially burdenin(ing) a person's exercise of religion" unless it furthers "a compelling governmental interest and is the least restrictive means of furthering that" interest.  However, the First Amendment of the US Constitution itself prohibits Congress from making any law "respecting the establishment of religion, or prohibiting the free exercise thereof." It was never necessary to add to, or detract from, those guarantees, which virtually mandate a wall of separation between church and state.

When a statute as vague as the RFRA is passed, it shuldn't be surprising that it would be used tactically to exploit the political passion(s) of the moment. It is now being exposed as bad legislation, which should spur questions for President Clinton's wife- and the other presidential candidates.  But that is unlikely, and the best hope for reevaluation lies in a successful effort by the unpopular Satanic Temple to exploit the law for its own benefit, for which the political class has only itself to blame. 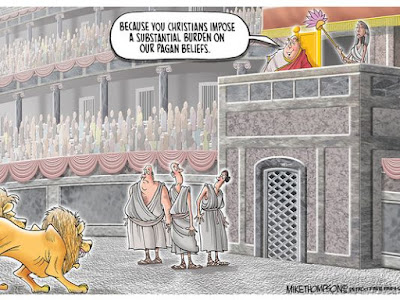