When he announced his presidential candidacy in June, 2015, Donald J. Trump declared

I will build a great wall- and nobody builds walls better than me, believe me- and I'll build them very inexpensively. I will build  a great, great wall on our southern border, and I will make Mexico pay for that wall. Mark my words.

We didn't have to mark his words, because they were repeated often, and to cheering crowds.  As recently as the first of this month he maintained "trust me, we're going to build a wall."

He won't, of  course, and has no real intention to do so. Remarks substituting "fence" for wall, Trump's recent meeting with Paul Ryan, and his prospective Cabinet members- eager to shrink government so it can be drowned in a bathtub- testify to his disinterest.

Nonetheless, there may not have been  a candidate Trump, would not have been a presidential nominee Trump, and certainly wouldn't be a President-elect Trump without the pledge to build a wall, especially that voters generally (and especially GOP voters) always have been keener about building a wall than, say, deporting illegal immigrants.

Rahm Emanuel offered an autopsy of that election and noted that voters were presented "a change versus a status quo candidate in a change election."  He remarked

"I'm all for a socially inclusive message, but not at the exclusion of an economically robust message," Emanuel said at a Brookings Institution panel on the presidential election and the U.K.'s surprising vote to leave the European Union earlier this year.

"Look at when we won versus when we lost," he continued, after referencing Bill Clitnon's and Obama's successes. "The takeaway is  clearly about something tha's a more robust and inclusive economic message versus one that is just socially."....

That would be mere political pablum had not

Also at the event, Emauel reaffirmed that Chicago will remain a "sanctuary city" and offered a loud defense of the young undocumented immigrants known as Dreamers.

Asked if there were issues on which cities could work with the incoming Trump administration, Emanuel said there may be, in areas sch as infrastructure and, depending on the proposal, taxes, but not on immigration.

Under the latest iteration of Trump's tax plan, the average dollar amount the wealthy gain would far exceed the amount gained by the poorest taxpayers; the percentage of income saved by the rich is greater than that saved by taxpayers of modest income; and even the percentage of income which is recovered by the wealthy is greater than that of the working and middle classes.  But Emanuel proposes to cooperate with Trump on his tax initiatives. 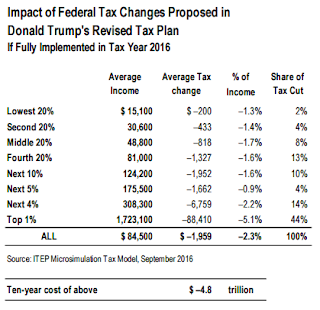 Odder, though, is that Emanuel reaffirmed that Chicago will remain a "sanctuary city."

The Chicago mayor had concluded "I think we should go back to what I think has worked. And that to me is a .... very strong economic with a strong socially inclusive message. But not one at the expense of another."

Mrs. Clinton (and other Democrats) did have an economically inclusive, as well as a socially inclusive, message.  But there is little doubt that she emphasized- as a share of her cultural message and of her overall message- support for comprehensive immigration reform, for a welcoming approach to both immigrants (including ones here illegally) and refugees.

By contrast, on his way to nomination and election, Donald Trump opposed sanctuary cities. The platform of the Republican Party- in an effort to harmonize its position and that of its candidate- called for penalizing sanctuary cities (an imprecise term, admittedly).

Not by coincidence, Donald Trump won the presidency and his Party did quite well in congressional elections. Now Rahm Emanuel, advocate of sanctuary cities, scolds the Democratic Party for emphasizing social issues, which it did with immigration and with its attacks on Trump for belittling immigrants.

The Democratic Party evidently had excessive faith in the power of changing demographics- especially the growing Latino population- which apparently has escaped the attention of the Chicago mayor. The prescription offered by Rahm Emanuel, who made his millions through investment banking, fervently promotes the charter school industry, and is hospitable to illegal immigrants, is more than a little suspect.

A greater emphasis on economic concerns shared by the middle classes and the poor,by minorities and whites, probably would have mitigated losses on November 8. That would conflict with the positions of Emanuel, a supporter of sanctuary cities and foe of unions, and is precisely the message the Democratic Party should reject.