Voting For A Man Of The People

Slate's Jamelle Bouie tweets "I am... troubled by the choice to use the brutal murder of a homeless man as a device for explaining Trump voters."

He is referring to a piece by one Evan Smith, who finds serious poverty, drug addiction, and hopelessness in the "small Appalachian hill town" of Zanesville, Ohio, in which there are more high school dropouts than high school graduates. The journalist is unsurprised that last month, police there found the charred remains of a 62-year-old man, who had died from blunt force trauma.

In just the past year, they’ve seen sword stabbings, shootings, deadly police stand-offs, dozens of heroin overdoses each month, too many petty robberies to count, house fires, and now a burned homeless man.

"Everything is falling apart," Smith observes and

Go down those streets and you won’t see a Trump sign,” said county engineer Doug Davis, who knows the bridges and roads of the area better than anyone else. “No, instead you’ll see ‘Hillary for Prison’ signs. You’ll see ‘Drain the Swamp’ signs.”

“It’s about more than just Trump, believe me,” Davis said.

Maintaining "so nothing is surprising," even to see "a man killed and burned over $20" and Smith argues

This is the simple reason why Zanesville voted for Obama in 2012 and then flipped for Trump in 2016: the people on the southside began to rise up. It wasn’t about bankers, lawyers and doctors. Instead, it was about the unemployed, the former-factory workers, the trailer-park dwellers, the looked-down-upon, the white and angry, the white and depressed, and the lost.

Call them racist, xenophobic, deplorable. Go ahead — they’ve heard it all before from their northside neighbors.

But now, for the first time in a long time, they’ve swung back.

They've swung back on behalf of a man who claims to be worth billions and owns a  fleet of five jets, one of which has a 24-karat gold fixture and a leather toilet seat. They clobbered the opponent of a fellow who owns four mansions (Mar-a-Lago, below), as well as a Manhattan penthouse valued at $100 million, and nearly 40 other buildings in the heartland city of New York.. And they swung back on behalf of a guy who brags that not paying any federal income taxes "makes me smart." 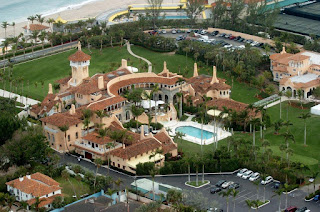 Notwithstanding Smith's implication, Zanesville's homeless man was not killed because Hillary Clinton supports the Affordable Care Act or that Donald Trump opposes abortion rights and gun safety legislation, or even because of e-mails or Clinton's representation of the Establishment. The connection of the murder and Trump's election is somewhat tenuous.

Rather, as Bouie notes, the article gives the impression that Zanesville's voters are "justified in directing their anger toward people as or more marginalized."  But it's worse if Smith is correct when he suggests voters on the southside went for Trump because they  were "rejecting the elites on the other side of town — your neighbors who don’t see you as equals — coupled with the impossibility of crossing over to the green grass on the other side."  If widespread, such a perception of "elitism" is a disturbing sign, for Zanesville, for the American voter, and for the nation..