Donald Trump was a fine choice as Time Magazine's Man of the Year. Charlier Pierce remarked "the fact remains that the president-elect is the only obvious choice for the award. There simply was no figure more important in shaping the news and the nation than he was."

He was, ultimately, a legitimate choice because- against great odds- he was elected President of the United States, the most powerful nation on earth.  He was inarguably the most "obvious" choice. But whether he was the best, rather than the most obvious, choice is arguable.

“Ours were coming back after the third debate,” Benenson said of the Clinton defectors. “We had actually solidified our lead for a period of days after that debate. Comey happens on that Friday, eleven days out, and that’s when we see—our defectors leave, their defectors get loyal and that keeps moving and probably in the end tips the balance.”

Fabrizio completely agreed with him and said if one didn’t understand the polling fluctuations, “you’d think the bottom fell out.”

The groups Fabrizio was tracking, specifically “Trump targets”—a cohort which they consistently tried to sway from supporting Johnson and/or Clinton—drastically decreased in the final week after the Comey letter. They all essentially came home.

But Fabrizio said they “held their breath” because just days later Comey cleared Clinton once again. Benenson said that second announcement did not help them either “because it just put it back into the conversation again.”

There was no accident.  Law professor David Cole has described, FBI Director Jim Comey disregarded a rule which

The rule recognizes that on “matters that have already received substantial publicity” or where public safety requires, “comments about or confirmation of an ongoing investigation may need to be made.” But that exception is plainly a narrow one. The general no-comment rule is designed to prevent prosecutors and law enforcement officials from using their authority to cast aspersions on the reputations of citizens; their job is to conduct investigations, not offer public character assessments.

rather than simply reporting that he had closed the e-mail investigation because he had found no evidence of Clinton violating any laws, he went on to castigate her as “extremely careless.” The federal criminal code is byzantine, to be sure, but carelessness is not a federal crime, and therefore, as FBI director, Comey had no business offering his personal opinion.

"Having violated the rule against public comment once," Cole continued,

Comey then went further, using that violation to justify another infraction. In an e-mail to his staff, he defended his extraordinary step of publically announcing the resumption of a closed criminal investigation by stating that he had promised to keep Congress informed when he testified in July about the investigation’s closure.

The job of the FBI, however, is not to offer Congress public progress reports on criminal investigations, but to conduct those investigations in confidence unless and until they warrant an indictment or dismissal. And Comey’s October 28 “report,” a brief letter to Congress, was bound to be misleading. The announcement followed the discovery of e-mails of Huma Abedin, Clinton’s chief of staff at the State Department, on the computer of Abedin’s now-estranged husband, Anthony Weiner, who is under a separate investigation for allegedly “sexting” with a minor. Neither Comey nor his staff had actually read any of the newly discovered e-mails when he first notified Congress, and therefore had no basis for believing that they constituted evidence of wrongdoing. But the announcement nonetheless set off a flurry of renewed accusations against Clinton.

Moreover, every four years for the last few decades, including 2016, the Justice Departmenent has issued a memorandum strongly discouraging returning an indictment against a candidate (at all levels) within 60 days of an election. Therefore, Cole reasons, "even if the FBI had acquired enough evidence to charge Hillary Clinton formally with knowingly transmitting classsifed information or otherwise violating criminal law, that fact should not have been made public until after the election." When Comey announced eleven days before the election that additional e-mails had been found- on the server of the spouse of a Clinton aide- he had no reason to believe the messages were pertinent, especially since the FBI at that time had not even obtained a warrant to examine them.

Even though Clinton was ahead in polling in the vast majority of swing states when Comey made his statement on October 28, we don't know for sure who would have won the election had Comey not intervened.  Pigs may fly, Arizona may be swept into the Pacific Ocean, and Trump may have prevailed in the presidential election.  But if Donald Trump is the Person of the Year, Jim Comey deserves honorable mention. 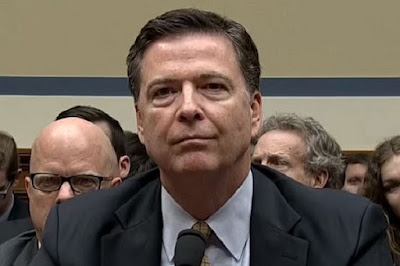