Not In A Landslide, He Wouldn't Have


Writing for historians of the future, Matthew Yglesias in Vox explains

Historians looking through the archives of stories published in November and December of 2016 will find billions of words published on the nature of Trump’s appeal to voters who liked him. These takes, whether accurate or not, are important pieces of sociological exegesis that shed light on the nature of our political debates.

But in terms of what actually drove the election result, people who liked Trump were not the key decisions-makers. Not only did he lose the national popular vote, but even in crucial swing states he was mostly viewed negatively.

Yglesias persuasively argues, "research from Gallup indicates that emails dominated what voters heard about Clinton all throughout the campaign" (word cloud, below). He concludes

Even at the time, some of us found it hardly credible that a decision as weighty as who should be president was being decided on the basis of something as trivial as which email address the secretary of state used. Future generations must find it even harder to believe. But the facts are what they are — email server management, rather than any deeper or more profound root cause, was the dominant issue in Donald Trump’s successful rise to power. 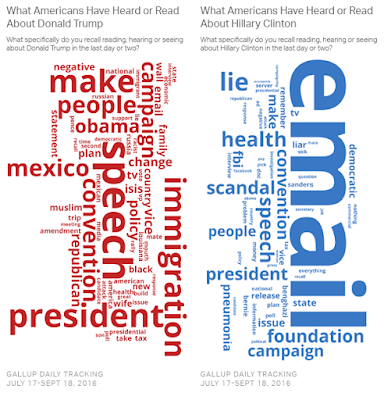 Notwithstanding Jim Comey's effect upon the ultimate outcome of the election, the exact impact of the email scandal (largely a contrived scandal, but still a scandal) is virtually impossible to determine, but probably was the dominant issue in the demagogue's successful rise to power,

Every argument has its flaw, however, and Yglesias' is a relatively trivial one, and at most, tertiary to his point.

Sargent acknowledges "more successful economic policymaking from the Obama administration" might have helped Clinton in the election,  He argues, however, that in the "most significant" state of Pennsylvania "Obama had a 51 percent job approval rating in the state. A majority of voters were okay with the incumbent administration...."

We know this from polls.  However, evaluating the accuracy of pre-presidential election surveys, Huffington Post Senior Polling Editor Natalie Jackson analyzed polling aggregates from all 50 states. She included a graph which 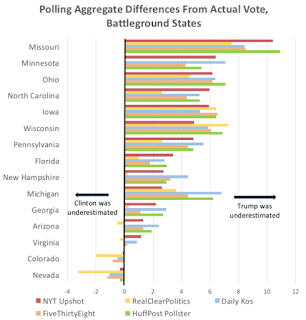 The polls proved unreliable. with significant numbers of voters reluctant to admit they would vote for Donald Trump. They did so even though (publicly or privately) they could- more politically correctly- couch their support for him as opposition to Hillary Clinton, as many did, sincerely or otherwise.

Compare that to pollsters asking people whether they approve of Barack Obama, whom everyone knows is the first black President, and for many is, above all, the first black President. He polls as 51% favorable. Remarkably, the assumption is that the respondents are telling the truth and, in Yglesias' case, that "a majority of voters" are "okay with the incumbent administration."

Okay, yes; pleased, no.  Gallup asked registered voters during the periods of 10/5-10/9, 11/1-11/6, and 11/9-11/13 whether they were"satisfied or dissatisfied with the way things are going in the United States at this time" and found 28%, 37%, and 27% satisfied, respectively.   Extrapolating, we can reasonably estimate that on Election Day 2016, approximately 35% of registered voters were "satisfied" with the course of the country. 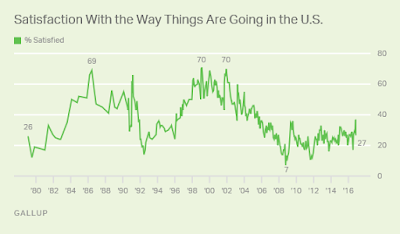 If not constitutionally barred from a third term, Barack Obama, if nothing else a better campaigner than Hillary Clinton, probably would have defeated Donald Trump in what already was a very close election won by an unpopular candidate.  However, Trump, one of the original and most dogged of birthers, ran and won with a campaign based on "draining the swamp."  Consequently, pundits, analysts, journalists, and others who tell us that President Obama is a popular guy should answer the question: whose swamp is it Americans wanted to drain?