Nolan D. McCaskill of Poliitico reports a case not of the blind leading the blind, but of the biggest fake ever leading the most significant demagougue ever:

In an excerpt of a “60 Minutes” interview to air Sunday, Ryan was asked whether he has conveyed to Trump that being president is not the same as being the CEO of the country and that Congress will have a role in his administration.

President Obama "stripped a lot of power away from the legislative branch of government?"   President Bush 43 issued 291 Executive Orders- Obama thus far, 235. At this rate, by the end of Obama's second term, he will have issued in eight years no more  than his predecessor did.

Little would have been accomplished by Washington without those Executive Orders, given that, as Michael Grunwald found, during the 2008-2009 transition, Joe Biden

was warned not to expect any bipartisan cooperation on major votes. “I spoke to seven different Republican Senators who said, ‘Joe, I’m not going to be able to help you on anything,’ ” he recalled. His informants said McConnell had demanded unified resistance. “The way it was characterized to me was, ‘For the next two years, we can’t let you succeed in anything. That’s our ticket to coming back,’ ” Biden said."

Soon thereafter, on the night of Obama's inauguration, 15-20 Republicans (including seven U.S, Representatives and seven U.S. Senators) met at The Caucus Room, an upscale restaurant in Washington, D.C.. Robert Draper explained that they decided they would

Go after (Treasury Secretary nominee Timothy) Geithner. (And indeed Kyl did, the next day: ‘Would you answer my question rather than dancing around it—please?’)

Show united and unyielding opposition to the president’s economic policies. (Eight days later, Minority Whip Cantor would hold the House Republicans to a unanimous No against Obama’s economic stimulus plan.)

One of those Representatives was Paul Ryan, who should know better than to whine about an imaginary abuse of power on the part of President Obama.

While he "talked about" the Constititution with Donald Trump, the august Speaker of the House- were he to develop a backbone- might talk about Article 1, Section 9, Clause 8, which inconveniently reads (chart below from this Twitter account)

No Title of Nobility shall be granted by the United States: And no Person holding any Office of Profit or Trust under them, shall, without the Consent of the Congress, accept of any present, Emolument, Office, or Title, of any kind whatever, from any King, Prince or foreign State. 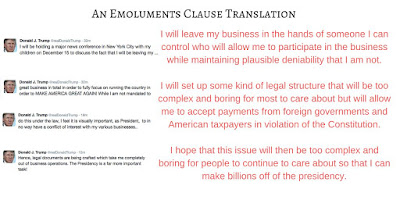 In his most recent financial disclosures, Trump listed 144 individual companies that have had dealings in at least 25 countries in Asia, Europe, Africa, South America and North America, among other companies with regional international interests, according to a CNN review.


The interests range from management deals with golf courses in the UAE, branding agreements with real estate projects that bear Trump's name in India as well as companies that have been involved with beverage sales in Israel.

The leader of the Free World will get plenty of gifts out of those 25 countries, which will want something in return. President Trump will compromise the United States of America or will retaliate. It won't be pretty.

"Prior to the election," the President-elect tweeted on November 21, "it was well known that I have interests in properties all over the world. Only the crooked media makes this a big deal." Well, the media and the United States Constitution. Speaker of the House Paul Ryan (and the rest of the thoroughly cowed GOP congressional delegation), not at all.