On his way to the presidency, Donald Trump told lie after lie, including about the Clinton Foundation. However, as Clinton campaign spokesman Brian Fallon noted twenty months ago, no one "ever produced a shred of evidence supporting the theory that Hillary Clinton ever took action as secretary of state to support the interests of donors to the Clinton Foundation.”

We're still waiting, even after an appearance Sunday on CBS' Face the Nation, when Kellyanne Conway stated

When it comes to Russia and coziness, let’s not forget it was Hillary Clinton through her craven foundation requests -- Bill Clinton got a million bucks to give a speech in Russia. And then she turned over 20% of US uranium rights. So let’s be honest about who for money, and who for power, and who for access has cozied up to the Russians.

That's one powerful Secretary of State.  As explained in factcheck.org when Peter Schweizer made a similar claim in his hit job, "Clinton Cash"

The fact is, Clinton was one of nine voting members on the foreign investments committee, which also includes the secretaries of the Treasury, Defense, Homeland Security, Commerce and Energy, the attorney general, and representatives from two White House offices — the United States Trade Representative and the Office of Science and Technology Policy. (Separately, the Nuclear Regulatory Commission needed to approve (and did approve) the transfer of two uranium recovery licenses as part of the sale.)

By law, the committee can't veto a transaction; only the president can. According to The New York Times, Clinton may not have even directly participated in the Uranium One decision. Then-Assistant Secretary of State Jose Fernandez, whose job it was to represent the State Dept. on CFIUS, said Clinton herself "never intervened" in committee matters.

The "million bucks" Bill Clinton got for a speech in Russia turns out to have been $500,000, and The Wall Street Journal reportedly "found no evidence that speaking fees were paid to the former president in exchange for any action by Mrs. Clinton."

Mrs. Conway did not explain how Mrs. Clinton "who for access has cozied up to the Russians" (cartoon below from Signe Wilkinson, The Philadelphia Inquirer).  Nor did she explain why Clinton would want to gain access to the Russians, nor whom "the Russians" she was referring to are.  And former President Clinton earned $500,000 rather than $1,000,000 for a speech to "Russians." (If that seems a mere technical point, please mail me a half million dollars and I'll respond with a gracious thank-you note; no personal checks, please.)

That's par for the course for Conway, however.  When Obama press secretary Josh Earnest recently noted Russian influence in the election, Conway commented

That is just remarkable. That is breathtaking. I guess he’s auditioning to be a political pundit after his job is over soon. That is incredibly disappointing to hear from the podium of the White House press secretary. Because he basically — he essentially stated that the president-elect had knowledge of this, maybe even fanned the flames. It’s incredibly irresponsible and I wonder if his boss, President Obama, agrees.

Notice, Conway isn’t directly challenging the truth of the allegation, she’s just calling it “remarkable” and “breathtaking” and “disappointing” and “unfortunate” that people mention it in public. That’s how professional liars in Washington do it. 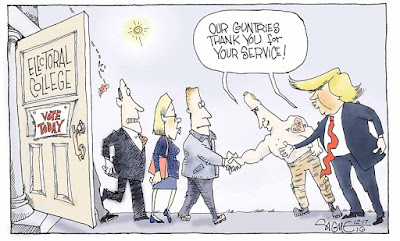