In an interview with NPR, President Obama recognizes, among the reasons Democrats have so much trouble winning the the votes of rural residents

Some of it is the prism through which they're seeing the political debate take place. They may know less about the work that my administration did on trying to promote collective bargaining or overtime rules. But they know a lot about the controversy around transgender bathrooms because it's more controversial, it attracts more attention.

But then the President went completely astray, commenting

I think that on something like the Affordable Care Act, you have people who are benefiting right now from Obamacare who either don't know it's Obamacare or consider that as a given and then end up voting on Second Amendment rights.

Donald Trump's campaign website has an entire section entitled not "gun control" or even "gun rights" but "Second Amendment Rights."  It begins (however falsely) "The Second Amendment to our Constitution is clear. The right of the people to keep and bear Arms shall not be infringed upon. Period. The Second Amendment guarantees a fundamental right that belongs to all law-abiding Americans."

The only right the Second Amendment guarantees is the right to bear arms for someone who is in a militia. Still, "Second Amendment rights" is a rallying cry for the pro-gun lobby, used by the left only defensively, to assure listeners that they are not being critical of  the Constitution.

Obama's use of "Second Amendment rights" harkens back to November 3, 2010, when he declared Democratic congressional candidates suffered a "shellacking," which further undermined the Democratic Party's credibility, in the previous day's election. A guy who writes a portion of  some speeches and is as adept as he at stringing words and phrases together should know "shellacking" plays into the hands of political opponents, and that "Second Amendment rights" could be easily replaced by "gun safety rights" or at least the more neutral "gun control."

The President does concede that after he leaves the White House "I'm less likely to get involved in all the nuts and bolts of electioneering. In that realm, I'm much more likely to just give advice."  Perhaps he can learn from his own mistakes and help the Party avoid its descent since he took over: 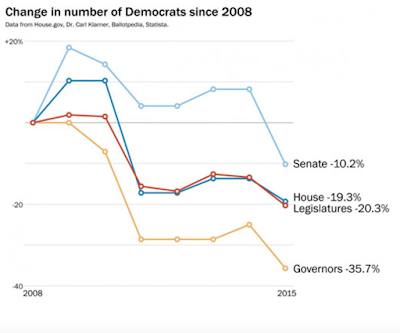