Friends To The End- Or To Our End

And she has some predictable- uh, er fascinating- things to say. Professing her admiration for Chilean president Michelle Bachelet and Brazilian president Dilma Rousseff, Clinton stated

It matters. It matters because we have half the population that has given so much to building this country, to making it work, raising children and, of course, I want to see women eventually in the White House. If you look at my friends and former colleagues, who are now in the Senate, it was the women senators, on both sides of the aisle, who finally broke the fever over the government shutdown and the debt limit. ... They have been working across party lines, and we need more of that.

Sorry; don't buy it.  Clearly, Clinton wants to see a female president- but not Kirsten Gillibrand, Elizabeth Warren, nor Repub governor Susana Martinez of New Mexico. Whether "raising children" is any more of a qualification for USA president than, say, being the traditional breadwinner has been for men is debatable.   We've gotten a lot of bad male presidents upon selecting them for gender, and we may get a few bad female presidents selected, as Hillary Clinton would have it, because they "finally broke the fever over the government shutdown and the debt limit."

If Mrs. Clinton were to promote the presidential prospects of Washington Senator Patty Murray, the Budget Committee chairman who recently negotiated with Paul Ryan a deal which averts a government shutdown, her support of "women senators" who "finally broke the fever over the government shutdown and the debt limit"  would be more credible. Admittedly, that extraordinarily unlikely development might not be favorable, given Murray's failure to negotiate with House Budget Committee chairman Ryan an extension of unemployment compensation nor nor agreement that the GOP won't balk at lifting the debt ceiling.

While giving her encomium to the value of choosing candidates based on genetics, Mrs. Clinton gave a nod to the liberal concerns of high unemployment, "people getting kicked off food stamps," and the inability of small business to obtain credit.  But her heart (or financial interests) seems to lie elsewhere.  National Review on October 30 reported

Hillary Clinton spoke at two separate Goldman Sachs events on the evenings of Thursday, October 24 and Tuesday, October 29. As both Politico and the New York Times report, Clinton’s fee is about $200,000 per speech, meaning she likely netted around $400,000 for her paid gigs at Goldman over the course of six days.

Last Thursday, Clinton spoke for the AIMS Alternative Investment Conference hosted by Goldman Sachs, a closed event exclusively for Goldman clients. AIMS is an annual conference that explores the latest strategies and products available to financial advisers. At the event, Clinton offered what one attendee described to me as “prepared remarks followed by questions.”

On Tuesday, Clinton spoke at the Builders and Innovators Summit, devoted to discussing entrepreneurship and how to help innovators expand and grow their businesses. According to Politico, Clinton conducted a question-and-answer session with Goldman CEO Lloyd Blankfein. Goldman Sachs declined to comment on the subject of her remarks or why Mrs. Clinton in particular was invited to the events.

Keeping close to the investment world, Clinton also made visits to private-equity firms KKR in July and the Carlyle Group in September. At KKR’s annual investor meeting in California, Clinton answered questions from firm co-founder Henry Kravis on the Middle East, Washington, and politics. At Carlyle Group, Clinton made a speech to shareholders moderated by Carlyle founder David Rubenstein.

Clinton’s office did not respond to a request for comment.

A couple of weeks later, Elizabeth Warren spoke (transcript, here) to the Roosevelt Institute upon the occasion of release of a report prepared by that organization and Americans for Financial Reform.   "Today," she noted

the four biggest banks are 30% larger than they were five years ago. And the five largest banks now hold more than half of the total banking assets in the country. One study earlier this year showed that the Too Big to Fail status is giving the 10 biggest US banks an annual taxpayer subsidy of $83 billion.

The Massachusetts senator observed "What we need is a system that puts an end to the boom and bust cycle. A system that recognizes we don’t grow this country from the financial sector; we grow this country from the middle class."  Unemployment, food stamps, access of small businesses to credit are safe issues, relatively easy to address for a Democratic senator or candidate for the party's presidential nomination.   But if Hillary Clinton understands that the country prospers from the middle class out rather than from the largest banks downward, she gives no hint. 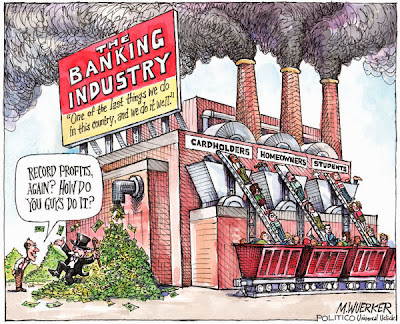