He Gets By With A Little Help From His Friend

In an interview with ABC, House Budget Committee chairperson Paul Ryan states "My job is not to cloud my judgment with personal ambition. My job is to do my job and that is things like this.  If I have to stop myself from doing what I think is right to become president, then I don’t want to be president.”

Overcome by Ryan's pomposity, Daily Kos' Jed Lewison sneers at the congressman's "selfless act of heroism" and remarks "I'm sure the the 1.3 million Americans who will find out that Congress has cut their unemployment benefits by failing to include an extension in the budget agreement won't agree with Ryan's perspective, but let's get back to St. Paul for a moment..."

Ryan is, as Dan Rather might have put it, slicker than the Alaska prairie on New Year's Day.  Fresh off House approval of the budget agreement (graphic representation in context, below) he reached with Senate Budget Committee chairperson Patty Murray, Ryan appeared on Meet the Press (transcript, here) and commented

You gotta, you know, crawl before you can walk before you can run.  I'm hopeful, as a Ways and Means member as well, that we can start moving tax reform legislation. I think ...

Tax reform?  Watch the Ways and Means Committee in the first quarter of next year.  We're going to be advancing tax reform legislation because we think that's a key ingredient to getting people back to work, to increasing take-home pay, to...

"Two out of three ain't bad," Meat Loaf once sang. The Budget Committee chairman must have been a fan, for he swears his party's "ultimate goals" are to "balance the budget, pay off the debt, don't raise taxes."  But one of those three doesn't belong. Can you guess which one?

After the Wisconsin Repub pledged fealty to "tax reform legislation," Gregory, unwittingly, asks him "And could you actually raise money from tax reform and actually bring down the debt?"

Silly man.  Of course, he won't accept additional revenues, because the professed concern with bringing down the debt is a mere scam, mouthed to keep Beltway journalists stuck to their "he said, she said" narrative.  Ryan's response, predictably, was "We'll have to disagree about that." Balance the budget and pay off the debt without raising taxes. Same old tune, same old dishonesty.

Of the man determined to cut the budget without raising the taxes which are at nearly their lowest level of the past half century, Senator Murray, appearing with Ryan on MTP, stated "I think it's a step forward that shows that there can be other breakthroughs and compromise if you take the time to know somebody, know what their passions are, and know how you can work together."

When asked about the upcoming debt ceiling, she responded (as the program's transcript has it) "Well, we agreed that the debt ceiling would not be part of this.  I don't think that our country wants to see another crisis and to send our country into a tailspin.  And, so, we'll take that road when we get there.  But, you know, I’ll defer to you (TO RYAN)."

Oh, yes, defer to brother Paul because he has only the best interests of the country at heart. That, however, does not dovetail with his remarks on Fox News Sunday:

We’re going to meet in our retreats after the holidays and discuss exactly what it is we’re going to try to get for this.

On Meet The Press, Murray said of the man who votes for spending, then refuses to agree to pay the bill:

Well, we didn't get everything we wanted.  But I'll tell you what we did get, is certainty for the next two years.  We have a point now where we're not going to tell everybody that we're going to throw the economy in a tailspin because we have to have something.

Not throw the economy in a tailspin because we have to have something?  Dear lady, your counterpart, your negotiating partner, said the very same morning "We're going to decide what it is we're going to accomplish out of this debt limit fight."  Admittedly, that is certainty- certainty that brother Paul's party is going to balk at raising the debt limit and thereby threaten to destroy the economy.

Even David Gregory has a clue. "Republicans," he noted, "have dictated budget negotiations over the last couple of years. We're talking about these across-the-board cuts. There's nothing in here, big spending programs to get the economy going, that Democrats think are really important, and jobless benefits don't get extended."

And neither, in return for cutting spending and cutting the unemployed off at the knees, do Democrats get any assurances from Republicans about the debt limit- other than that they're going to use the issue to extract more concessions from the poor and the middle class.

Jed Lewison is right- Paul Ryan would like to nominate himself for sainthood. But he is at least somewhat forthright, hinting at the GOP's tactics of obstruction and disregard for the country over the next few months. It's not his fault that Patty Murray and other leading Democrats have chosen not to listen. 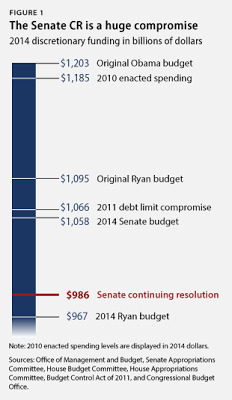