First citing the inaccurate Benghazi report and the puff piece interview of Amazon founder Jeff Bezos, Politico's Dylan Byers recognizes "CBS '60 Minutes' has had a terrible year." In another piece, he reports

Lara Logan and Max McClellan, the '60 Minutes' journalists who were put on a leave of absence following their now-retracted report on Benghazi, are set to return to the program early next year, POLITICO has learned.

Logan and her producer, who had unfinished projects in the works when they left in November, have started booking camera crews for news packages, network sources said. Their return could come as early as next month.

In case you are wondering what Dan Rather is up to these days, you can find him doing interesting long form reporting at AXSTV. He is persona non grata at the Tiffany network. After all, he relied on a bad source about an inconsequential story from 40 years ago, which is unforgivable. Logan will still have the most vaunted news program in history pushing her shallow jigoistic drivel --- whether it's true or not.

"60 Minutes," as Heather Digby Parton and probably Byers realize, is a shell of its former self.  The latter notes the interview (transcript, here) the program ran Sunday night of NSA Director Keith Alexander by John Miller "has been roundly criticized for a litany of issues, from Miller's conflicts of interest to his softball questions to the absence of any input from NSA critics."

One of General Alexander's major objectives was to damp down the criticism of the agency's collection of metadata, defined by Miller as "the digital information on the number dialed, the time and date, and the frequency of the calls."  So Alexander claimed

"We need to help the American people understand what we're doing and why we're doing it." And to put it simply, we're doing two things: We're defending this country from future terrorist attacks and we're defending our civil liberties and privacy. There's no reason that we would listen to the phone calls of Americans. There’s no intelligence value in that. There's no reason that we'd want to read their email. There is no intelligence value in that.

That is one of the arguments eviscerated in the takedown of the interview by Spencer Ackerman, who explains

Notice the tension here. It’s the metadata – who you called, who called you, for how long, how frequently you communicate – that has intelligence value, not, in Alexander’s telling, what you actually say on the phone. The NSA is relying for its defense on a public conception of surveillance as the interception of the content of your communications, even while it’s saying that what’s actually important is your network of connections – which the agency is very, very interested in collecting.

Senator Ron Wyden, an intelligence committee member who has emerged as a leading opponent of bulk collection, says the metadata provides NSA with a “human relations database”. For many, surveillance occurs when someone else collects anything on their interactions, movements, or communications, rather than when that other party collects certain kinds of information. And it hardly makes sense to say, as Alexander did, that surveillance on Americans doesn’t occur when NSA collects the sort of information that it believes actually has intelligence value.

Six months ago, Jane Mayer wrote of her conversation about metadata with Sun Microsystems engineer Susan Landau, who stated

“The public doesn’t understand.  It’s much more intrusive than content.” She explained that the government can learn immense amounts of proprietary information by studying “who you call, and who they call. If you can track that, you know exactly what is happening—you don’t need the content.”

For example, she said, in the world of business, a pattern of phone calls from key executives can reveal impending corporate takeovers. Personal phone calls can also reveal sensitive medical information: “You can see a call to a gynecologist, and then a call to an oncologist, and then a call to close family members.” And information from cell-phone towers can reveal the caller’s location. Metadata, she pointed out, can be so revelatory about whom reporters talk to in order to get sensitive stories that it can make more traditional tools in leak investigations, like search warrants and subpoenas, look quaint. “You can see the sources,” she said. When the F.B.I. obtains such records from news agencies, the Attorney General is required to sign off on each invasion of privacy. When the N.S.A. sweeps up millions of records a minute, it’s unclear if any such brakes are applied.

Another claim examined by Alexander pertained to a "BIOS plot," which he describes as "an attempt by China to launch malicious code in the guise of a firmware update that would have targeted computers apparently linked to the US financial system, rendering them pieces of junk."  Alexander maintains

The lack of specificity made cybersecurity expert Robert David Graham dubious that the plot NSA claimed to discover matched the one it described on TV. “All they are doing is repeating what Wikipedia says about BIOS,” Graham blogged, “acting as techie talk layered onto the discussion to make it believable, much like how Star Trek episodes talk about warp cores and Jeffries Tubes.”

Did someone mention Star Trek? It is unclear whether Graham was aware (photo below via Glenn Greenwald, text from Foreign Policy's "The Cowboy of the NSA")

When he was running the Army's Intelligence and Security Command, Alexander brought many of his future allies down to Fort Belvoir for a tour of his base of operations, a facility known as the Information Dominance Center. It had been designed by a Hollywood set designer to mimic the bridge of the starship Enterprise from Star Trek, complete with chrome panels, computer stations, a huge TV monitor on the forward wall, and doors that made a "whoosh" sound when they slid open and closed. Lawmakers and other important officials took turns sitting in a leather "captain's chair" in the center of the room and watched as Alexander, a lover of science-fiction movies, showed off his data tools on the big screen.

"Everybody wanted to sit in the chair at least once to pretend he was Jean-Luc Picard," says a retired officer in charge of VIP visits.

This is the guy now in charge of an agency which is collecting information on phone calls of every American. And 60 Minutes, once the gold standard of TV news, continues its descent. 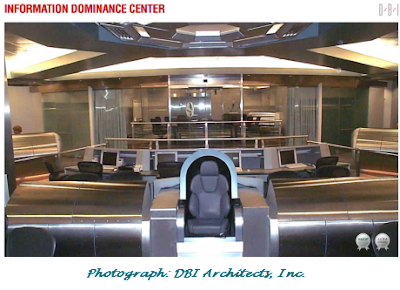