Except to fans of the Philadelphia Eagles and the New York Giants  (video below)*, it's called "the fumble," when a ball dropped by a Cleveland running back cost the Browns the 1987-1988 AFC championship game against the Denver Broncos.  President Obama's handshake with Raul Castro Tuesday at the funeral for Nelson Mandela probably will not become known as "the handshake," but it won't be for any lack of effort by John McCain.  Talking Points Memo reports

It gives Raul some propaganda to continue to prop up his dictatorial, brutal regime, that's all," McCain said of the handshake between the two world leaders that took place at a memorial service for Nelson Mandela.

When asked if Obama should have extended his hand, McCain was quick to respond.

"Of course not," the senator said. "Why should you shake hands with somebody who's keeping Americans in prison? I mean, what's the point?"

Then, after a slight pause, McCain went there.

He should have taken a longer pause.  The point, as McCain should know, is that two men see each other at a funeral and they shake hands.   It happens every day, no doubt even in Arizona.

At least McCain never shook hands with a despot.  Oops: 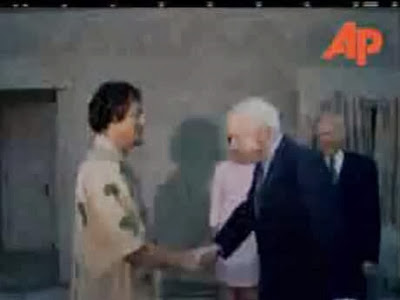 Or at least Gaddafi didn't institute a regime of jailing individuals because of their political views.  Oops again:

Muammar Gaddafi kept his brutal regime in place for more than four decades by layering security agency on top of security agency to create a vast network for monitoring ordinary Libyans. No one could be sure that a chat on the phone or a conversation in a café wasn’t being overheard or recorded by regime informers. Citizens could be nabbed from their homes because of the slightest suspicion of anti-regime activity and disappear for years.

McCain obviously is concerned that President Obama may be on the verge of appeasing Castro. Fortunately, the Arizona senator always has stood steadfast against giving concessions to foreign dictators.  But during that visit (in which he was accompanied by Senators Lindsey Graham and Joe Lieberman) to Gaddafi in August of 2009, McCain assured Libya's National Security Adviser

that "the United States wanted to provide Libya with the equipment it needs for its security," the official notes of the meeting reveal. McCain called the U.S.-Libya military relationship "strong" and said any frustrations on the Libyan side should be weighed against the "officer training" Libyan military brass were receiving "at U.S. Command, Staff, and War colleges."

The morning after his handshake, he tweeted

McCain's remark Tuesday was yet another in the Repub practice of making inappropriate and inaccurate analogies to Munich.  The website of the United Kingdom's National Archives reminds us

The Treaty of Versailles, made in 1919 at the end of the First World War, was intended to make a lasting peace. Many people felt that the Treaty had caused terrible resentment in Germany on which Hitler had been able to play in order to achieve power. The government believed that Hitler and Germany had genuine grievances, but that if these could be met ('appeased') Hitler would be satisfied and become less demanding.

Hitler was open about his refusal to accept many of the terms of the Treaty of Versailles. Soon after he became Chancellor of Germany in 1933 he began to re-arm the country, breaking the restrictions placed on the German armed forces. In 1936, he sent German troops into the Rhineland and in March 1938 he joined Germany and Austria. Czechoslovakia was the logical next step for his aggression and German Nazis in the Sudetenland were told to stir up the trouble that led to the crisis examined here. Edvard Benes, the leader of Czechoslovakia, was concerned that if Germany was given the Sudetenland, most of the Czech defences (sic) would be handed over to the Germans and they would be left defenceless (sic).

Chamberlain's flight to Berchtesgaden was followed by another to Godesberg a week later and then another to Munich on 29 September. At Munich, Chamberlain got an international agreement that Hitler should have the Sudetenland in exchange for Germany making no further demands for land in Europe. Chamberlain said it was 'Peace in our time'. Hitler said he had 'No more territorial demands to make in Europe.' On 1 October German troops occupied the Sudetenland: Hitler had got what he wanted without firing a shot.

The Sudetenland once had been a part of Germany and while a part of Czechoslovakia remained (obviously) adjacent to Germany- or, as the Nazis (and Germans beforehand) put it, the "Homeland."  Alaska was once part of Russia but is thousands of miles from Raul Castro's Cuba.  Florida, however, is only 90 miles from Cuba- which, if Senator McCain is prescient, means that American travelers to Disney World may soon find themselves subjects of Havana.   Bone up on that Spanish, folks.


*Fullback Larry Csonka is in the Hall of Fame and was a superstar on the last unbeaten NFL team (Miami Dolphins, 1972 ).  So Bob Gibson and Joe Pisarcik take the blame.