It Must Be Government's Fault


Attempting, in a conservative vein, to be realistic, Bill O'Reilly suggests Phil Robertson at least made a tactical error.   Chatting with fellow rightie Laura Ingraham, O'Reilly asks "Do you think Robertson made a mistake in the condemnation line? See, that's where I think he made his mistake. Right up to there, he was OK. But once he went in and said you are not going to heaven."

O' Reilly at least was connected, however tenuously, to reality, as contrasted with Ingraham, who imagined "They want him to shut up. It's the new blacklist. If you don't submit to their worldview, they will try to destroy you."  Similarly, Mike Huckabee told Fox News' Chris Wallace that comments made by Robertson comparing homosexuality to bestiality are "more appropriate for the duck woods than the pages of a major magazine."

As everyone presumably knows now, they were referring to the patriarch of the Robertson clan of A&E's now-famous Duck Dynasty, who in arguably his most controversial comment to a GQ interviewer maintained

It seems like, to me, a vagina—as a man—would be more desirable than a man’s anus. That’s just me. I’m just thinking: There’s more there! She’s got more to offer. I mean, come on, dudes! You know what I’m saying? But hey, sin: It’s not logical, my man. It’s just not logical.

But if Laura and Bill and (of course) Sarah Palin are worried that A&E will cancel Duck Dynasty or Phil Robertson, they have little to worry about. The statement from the cable network stated it "has placed Phil under hiatus from filming indefinitely" but

The next day, Entertainment Weekly reported

A source close to the situation confirmed that when the network resumes airing new episodes of Duck Dynasty starting Jan. 15, footage featuring the Robertson patriarch will indeed remain intact. The network also hopes the media and fan furor will cool down over the holidays and that tensions over shooting future episodes can then be resolved.

“There’s no negotiation to have; we’re doing the show,” said an insider close to the situation. “We’ll figure out a solution. It’s just not going to happen overnight. Everybody will take a break for the holidays and regroup afterward. That’s probably the smartest thing for everyone to do. Time heals a lot of wounds.”

Duck Dynasty is a big hit with the network's audience, a big money maker, and we wouldn't want to (cliche for everyone over the age of 50) kill the goose that laid the golden egg.   It seems a fairly simple concept to understand- corporation cares little about politics but only the bottom line, and will maintain the status quo until and unless it fears an insurrection by advertisers.

But it is a concept conservatives apparently find difficult to grasp. On her Facebook page (on which the photo below appears), Sarah Palin writes "free speech is an endangered species. Those “intolerants” hatin’ and taking on the Duck Dynasty patriarch for voicing his personal opinion are taking on all of us."   PJ Media culture critic Andrew Klavan argues "But the rest of you liberals…  listen, I know you.  I know a lot of you are against the kind of oppressive and bigoted activity that is becoming more and more emblematic of leftist thought and action. But there comes a point where if you’re not against them, you’re for them."   And the openly gay libertarian Camille Paglia (to whom Klavan approvingly links) likens disapproval of Robertson's remarks to "the level of punitive PC, utterly fascist, utterly Stalinist, OK, that my liberal colleagues in the Democratic party and on college campuses have supported and promoted over the last several decades." Seriously.

Besides arguably inflammatory statements about gay people, Robertson also commented on black people in a fashion which would make Rand Paul's heart skip a beat.  But beyond Robertson's views of homosexuality or race relations or the misunderstanding of whether an employer can suspend an employee for remarks it finds inimical to its business model lies a more pervasive problem..

It is a myth which on his Fox News' program cleverly titled Huckabee, the former Arkansas governor avoided propagating. Recognizing the network as responsible for its actions, he notes reality television

has given us such high brow viewing as Jersey Shore, Temptation Island and Cheaters. It's okay for shows to glorify adultery, binge drinking, teen sex and serial promiscuity, but if someone on a reality show should actually reflect the reality of his Christian faith, then God better help him, because the network won't.

So just who do the suits at A&E think those millions were who watch Duck Dynasty? Muslims aren't criticized, ostracized or banned from the public square, and their views are far more harsh and intolerant of homosexuality.

Still, the dominant theme in the conservative community is to blame the public, rather than, the private, sector. Steve M. argues Paglia "is one more person who thinks A&E is a branch of the government."  First Amendment protections against abridgment of free speech apply only to government and not to the private sector, most notably in its role as an employer. As Digby puts it, "corporations and other employers can fire you for looking at them sideways much less expressing views they think will offend their customers."   A&E feared a backlash from its sponsors and acted in what the network perceived to be its pecuniary interest.

Still, once a company slaps down an employee for talking out of turn, much of the right turns on government as if the employer has suddenly become a government agency.

It's an easy target.  Republican President Ronald Reagan said "Government is not the solution to our problem; government is the problem."  Anti-tax zealot Grover Norquist famously vowed "I don't want to abolish government. I simply want to reduce it to the size where I can drag it into the bathroom and drown it in the bathtub."  And in a more limited slam, responding to criticism of the rollout of health care reform, President Obama claimed "You know, one of the lessons -- learned from this whole process on the website -- is that probably the biggest gap between the private sector and the federal government is when it comes to I.T. " He would rather blame himself than business.

For better or worse, there is no first amendment right for an employer to honor an employee's views about ethnic or sexual minorities.  Equally certain is that when controversy arises, politicians and pundits alike instinctively know who to blame. 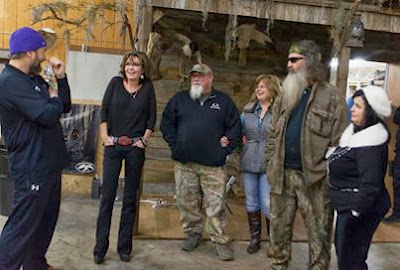