It's Just A Matter Of Pandering To The Right People

What is Paul Ryan, the mainstream media's second favorite Republican, up to?  The former GOP vice-presidential candidate, Charles Pierce remarks, "believes that government benefits have a corrosive effect on society, depriving its members of the character-building effects of poverty and hunger. He believes in the salvific effect of money earned in the perfect free-enterprise system."

And he also, Pierce observes, believes in casinos, or at least a plan proposed by Wisconsin Governor Scott Walker, as long as competing tribes also accept it.  "Considering that Ryan's basic position is that we also should turn Social Security and Medicare over to his cronies in the Wall Street casino," Pierce concludes, "I guess there's a sort of consistency there in his deep affection for economic parasites."

Ryan's preference for economic parasites- and extortion- ranges far and wide.   The debt ceiling comes due in March but, a Wall Street Journal blogger writes

House Budget Committee Chairman Paul Ryan (R., Wis.) on Tuesday floated the possibility of pressing the White House to approve the Keystone XL oil pipeline as a GOP condition for raising or suspending the debt ceiling.

“We’ve never just done nothing,” Mr. Ryan said in an interview on the Hugh Hewitt radio program. “We want to make sure that we’re taking steps in the direction of fiscal conservatism, of fiscal responsibility. I, for one, think we need to do more in the energy sector. I believe we need to approve Keystone pipeline. We need to produce regulatory certainties to all this private capital that develops this energy boon. We could be an energy independent continent within a decade if we stop the government from stopping it from happening. If we just get the government out of the way, it could be a real renaissance of oil and gas exploration in America, lower our gas prices, stop sending this money to foreign countries.”

The House Budget Committee chairperson is willing to jeopardize the U.S. economy by balking at raising the debt ceiling- routinely approved by Congress prior to takeover of the House by the GOP- thus threatening a default. While he threatens economic stability, he keeps at arms length from truth.

"If we just get the government out of the way," the Repub contends, "it could lower our gas prices,"  a claim that fails the test of objective reality.  According to Judy Dugan, author of "Keystone XL: An Oil-Industry Cash Machine," TransCanada consultants have written

[The current price discount in the U.S. Midwest] suggests that the supply of Canadian heavy crudes has exceeded demand in their main markets north of the USGC [US Gulf Coast].

The aim of lowering supply in the Midwest is enhanced because, Dugan explains

Major Midwest oil refineries, including the large BP refinery in Whiting, Indiana, have modified their plants to efficiently refine very heavy oils such as tar sands production.  Once the change is made, refineries cannot quickly or easily switch to other grades of oil that they would import from the Gulf Coast. Any withdrawal of tar sands crude to the Midwest would thus restrict the region's refining capacity, further spiking gasoline prices.

Gulf Coast refineries are already exporting record amounts of diesel fuel and more gasoline than is imported into the region, yet are still operating with up to 15% spare capacity depending on the season. They could not maximize revenue and profits without exporting any additional refined fuel. The U.S. Southeast already enjoys the nation’s lowest average gasoline prices (in the absence of major hurricanes). Gulf Coast refiners have no incentive to add supply that would let the regional gasoline price drop further. 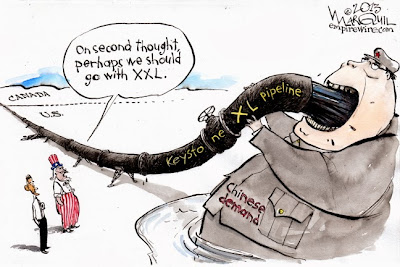 "If we just get the government out of the way," Ryan argues, "it could be a real renaissance of oil and gas exploration in America."  That's different than an unreal renaissance, presumably.  Ryan should, however, see an optometrist if we can't see what's already happening with oil and gas exploration in the nation whose economy he'd just as soon see tank. Fuelfix.com finds

The United States’ average daily oil production is on track to surge by 1 million barrels per day this year, the biggest one-year jump in the nation’s history, according to federal data

Bill McKibben's graph indicates we keep mining and drilling for more and more coal, oil, and gas in the U.S.A.: 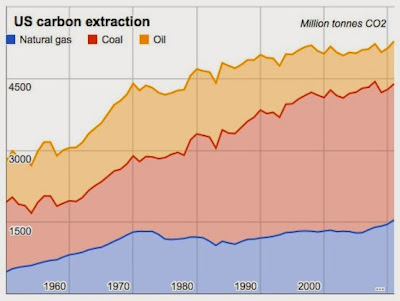 This sort of thing matters. The man is not only a leading candidate for the GOP nomination for President. He's also chairman of the House Budget Committee and author (with Democrat Patty Murray) of the budget recently signed by Barack Obama.  He can serve the country honestly, or he can continue to curry favor with the corporate interests which dominate Republican primaries. It doesn't look good.