What Kind Of Fool Do You Think I Am?*


The disturbing point about Digby's remarks is that she wasn't speaking solely of Rand Paul, but of the majority of GOP members of Congress.Noting House Speaker Boehner's declining popularity in his congressional district may, Ms. Parton writes

It's hard to know for sure if Boehner's unpopular because he's seen as a sell-out by the Tea partiers or if he's unpopular because he's acting like Ebenezer Scrooge on steroids. But the good news for Real Americans is that this might just mean the congress will come back and pass a UI extension. These numbers are pretty clear. The public does not like the idea of cutting people off when there are no jobs. gee, it turns out that the majority of Americans aren't complete jerks. Somebody tell the GOP.

Boehner is the most important Republican, but no member of Congress more clearly believes that the majority of Americans are complete jerks than does Rand Paul.   Sixteen days ago on Fox News Sunday, the Kentucky's junior senator stated  "I do support unemployment benefits for the 26 weeks that they're paid for. If you extend it beyond that, you do a disservice to these workers."   He added

When you allow people to be on unemployment insurance for 99 weeks, you're causing them to become part of this perpetual unemployed group in our economy. And it really - while it seems good, it actually does a disservice to the people you're trying to help.

Paul's remark was not merely condescending, though referring to a "perpetual" group of the unemployed makes it brazenly so.  Digging further, on Monday Paul clarified upon telling NBC News

When I said it's a disservice, I meant it - I am worried about the workers. Not that I think they become bad people by becoming unemployed longer, but that the longer they're unemployed, the less likely they are to ever get a job again...

If Senator Paul is disappointed his colleagues are not more forthright, he might look in the mirror.  "Does it make sense for our country to borrow money from China to give it to the unemployed in America? That is weakening us as a country," he maintained.   There are several reasons to be suspicious of mainland China but given that it owns less than 8% of American debt, the money we borrow from Beijing is the least of them. (China remains a boogeyman for many Republicans- except when it comes to moving companies or outsourcing jobs there,)

So Paul contends extending unemployment compensation "does a disservice" to the long-term unemployed because "the longer they're unemployed, the less likely they are to ever get a job again."

But he doesn't tell you that the ratio of CEO pay to that of production/non-supervisory workers rose from 20:1 in 1965 to 273:1 in 2012 (chart below, as with the others, from Economic Policy Institute). 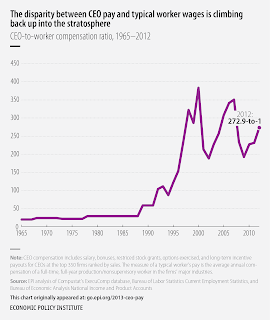 Nor does the Kentucky senator mention that the federal government- as encouraged by Repubs including himself- responded to the recession with the slowest growth of public spending following any recession since World War II, which has prevented the addition of millions of jobs (chart below). 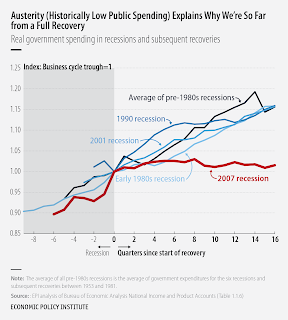 But most damning to Paul's claim is the surge of corporate profits in recent years while the number of long-term unemployed- for which the Senator oozes concern- has risen substantially (chart, below).

Contrary to Paul's implication, the "perpetual unemployed" have not been sidelined because unemployment benefits have made them malingerers, but because companies have decided not to invest in human capital. It's not for nothing that capital income as a share of corporate-sector income rose from the 1969-2007 average of 20.4% to 25.8% in 2013 (chart, below). 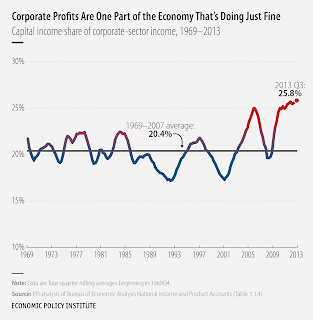 This has occurred while the net productivity of production/non-supervisory workers rose 63.8%  in the period from 1979 to 2012 (chart, below).  (Real compensation, meanwhile, rose 7.8%, belying the claims of free traders and of those who believe job training is a ticket into the middle class.)

The meme of Americans as lazy will not die. Most Democrats (and a minority of Republicans) support S744, the comprehensive immigration bill which nearly triples the H-1B guest worker program despite severe unemployment and stagnating wages among high-technology workers.  Lower down the food chain, more than 23,000 individuals recently applied for 600 jobs available when two new Wal-Mart stores in the District of Columbia advertised for applications. Yet, Repubs stymie efforts to extend unemployment benefits and to raise the minimum wage

Businesses are raking in profits with a bare minimum of employees.  As individuals remain unemployed for a longer period of time than in the past, employers are more reluctant to hire them in a self-perpetuating routine.  If Rand Paul thinks that American voters will believe that he is looking out for the interests of unemployed workers, he must really take us for jerks. Fortunately, he underestimates most Americans.