Closing some of the access lanes to the bridge, which spans the Hudson River and connects New Jersey to Manhattan, would only exacerbate the problem. But that's exactly what a Christie political appointee did in September, resulting in massive delays and gridlock on the first day of school.

The appointee, a Port Authority employee, has since resigned but said he ordered the closures for a traffic study. New Jersey's top Port Authority official, Bill Baroni, also resigned over the controversy, accepting responsibility for not following the right protocols in approving the study, Christie announced earlier this month.

The Port Authority of New York and New Jersey was created by an act of Congress and receives federal funding. In his role as chairperson of the Senate Commerce, Science, and Transportation Committee, Jay Rockefeller of West Virginia has asked the U.S. Transportation Secretary to "review the events of this incident and examine the Department's authority to ensure oversight of the agency to prevent future disruptions."  Democrat John Wisniewski is heading a probe by the New Jersey Assembly into the bizarre closure (video below from DemRapidResponse).

But figuratively throwing his weight around is nothing new for Governor Christie.  Pete Zernike of The New York Times recently explained

In 2011, Mr. Christie held a news conference where he accused State Senator Richard J. Codey of being “combative and difficult” in blocking two nominees. Mr. Codey, a Democrat who had served as governor following the resignation of James E. McGreevey, responded that he had not only signed off on the nominations, but had held a meeting to try to hurry them along.

Three days later, Mr. Codey was walking out of an event in Newark when he got a call from the state police superintendent informing him that he would no longer be afforded the trooper who accompanied him to occasional public events — a courtesy granted all former governors. That same day, his cousin, who had been appointed by Mr. McGreevey to the Port Authority of New York and New Jersey, was fired, as was a close friend and former deputy chief of staff who was then working in the state Office of Consumer Affairs.

“I understand politics, that a new administration comes in,” Mr. Codey said, but he believed this was not about Mr. Christie bringing in his own people. “This was all about sending a message.”

The governor laughed at the allegation of retribution, and his spokesman belittled the Democratic Party chairman who complained about it.

Later that year, the governor was pressing hard on Alan Rosenthal, the Rutgers political scientist whom Republicans and Democrats had chosen as the tiebreaking member of the commission that was redistricting the state’s legislative districts. Mr. Christie wanted Mr. Rosenthal to vote for the map put forward by the Republicans on the commission, but instead he chose the Democrats’ plan, saying it offered more stability.

Soon after, Mr. Christie used his line-item veto to cut $169,000 for two programs at Mr. Rosenthal’s institute at Rutgers.

The apparent payback is not always directed at Democrats — Mr. Christie can be just as hard on Republicans in an attempt to enforce party discipline.

In 2010, when a blizzard paralyzed the state, State Senator Sean T. Kean, a Republican, told a reporter that the “one mistake” the Senate president and governor had made was not calling earlier for a state of emergency, which might have kept more cars off the roads.

Mr. Christie was smarting from criticism that he had remained at Disney World during the storm. When he returned, he held his first news conference in Mr. Kean’s home district. Shortly before, a member of the governor’s staff called Mr. Kean and warned him not to show up. His seat was eliminated in redistricting the following year.

Mr. Kean, now in the Assembly, declined to comment. At the time, an anonymous administration official told The Star-Ledger that Mr. Kean got what he deserved.

Last year, another Republican, State Senator Christopher Bateman, voted against the governor’s plan to reorganize the state’s public medical education system. Mr. Bateman had been working with the governor to get a judge appointed in his home county. Suddenly, after months when it looked as if it would happen, the nomination stalled.

Mr. Bateman, too, declined to comment. But last month, when it came time for Republicans to elect a new leader in the State Senate, he first expressed support for the current leader; then, when Mr. Christie supported someone else, he voted for the governor’s candidate.

(Indicating the governor’s ability to use favor as well as fear, all the Republicans who voted for his preferred candidate, who lost, were rewarded with tickets to the governor’s box at a recent New York Giants game. “I felt kind of cheap,” one said, but added, “to say no is an insult.”)

Governor Christie says he knew nothing of the actions of his appointees, either Barone or David Wildstein (who ordered the closure) in nearly closing down the bridge running from Fort Lee, NJ to New York City. The resignation of Bill Baroni, apparently just another state employee, was unrelated to the bridge fiasco.   But curiously, Zernike writes further

The governor’s close lieutenants often deliver the message. Bill Baroni, one of the two appointees now accused of exacting revenge with the bridge lanes, once called Bill Lavin, an officer with a state firefighters’ union, after hearing him on the radio.

Mr. Lavin had told the interviewer that the unions and the governor had been talking past one another, and needed to start talking to one another. He thought he was extending an olive branch to the governor.

Mr. Baroni, then a Republican state senator, called Mr. Lavin with a message from the governor, and then used an obscene phrase to describe what the governor thought he should do.

Mr. Baroni declined to confirm or deny the incident in The Star-Ledger; he did not respond to messages seeking comment.

“What he said a couple of times,” Mr. Lavin recalled, “was: ‘The governor told me to make sure you don’t get this message mixed up; say these exact words.’ ”

There will be no smoking gun.  Powerful figures- and New Jersey's constitution grants extraordinary power to its chief executive- rarely issue the most nefarious orders.  Chris Christie did not say to Bill Baroni or to his other confidante involved in the fiasco "I need yet more Democrats to endorse my re-election bid and Fort Lee mayor Mark Sokolich refuses. Close two of the three access lanes for a few days on the busiest motor vehicle bridge in the world, tie up traffic throughout the town and when the Executive Director of the Authority figures out what's going on, tell him it was for a traffic study."

After "beanbag," Finley Peter Dunne's Dooley continued "‘Tis a man’s game, an’ women, childer, cripples an’ prohybitionists ‘d do well to keep out iv it.”    Chris Christie is surely none of those- and the political appointee who does not anticipate the boss' wishes is soon an ex-employee (cartoon below from The New Yorker via Talking Points Memo).  Or as in the case of Wildstein and Baroni, if someone has to take the fall, it surely isn't going to be the guy running for President of the United States. 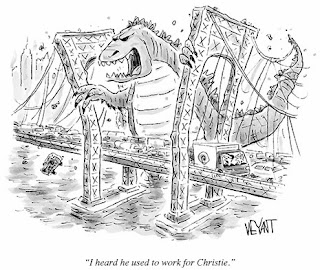