From Pope Francis (photo below from Reuters) to Barack Obama; and from Elizabeth Warren (photo way below from Progressive Change Campaign Committee) to Pope Francis.  Recently, President Obama stated

And, you know, I -- I think Pope Francis is showing himself to be just an extraordinarily thoughtful and soulful messenger of peace and justice. I haven`t had a chance to meet him yet, but everything that I have read, everything that I have seen from him indicates the degree to which he is trying to remind us of those core obligations.

He should know.  It was release of Pope Francis' stunning Apostolic Exhortation on November 26 which lent cover to the President's stirring statement on the economy on December 4.  Recognizing "the basic bargain at the heart of our economy has frayed," Obama remarked

In fact, this trend towards growing inequality is not unique to America’s market economy.  Across the developed world, inequality has increased.  Some of you may have seen just last week, the Pope himself spoke about this at eloquent length.  “How can it be,” he wrote, “that it is not a news item when an elderly homeless person dies of exposure, but it is news when the stock market loses two points?”

Addressing on the Senate floor on November 18 the retirement crisis, Massachusetts' Warren explained

The call to cut Social Security has an uglier side to it, too. The Washington Post framed the choice as more children in poverty versus more seniors in poverty. The suggestion that we have become a country where those living in poverty fight each other for a handful of crumbs tossed off the tables of the very wealthy is fundamentally wrong. This is about our values, and our values tell us that we don’t build a future by first deciding who among our most vulnerable will be left to starve.

Fresh off his speech in which he recognized "the gap separating the majority from the prosperity enjoyed by the happy few" and  criticized "the culture of prosperity" and "people (who) continue to defend trickle-down theories," the Pope was at it again.  In a speech entitled Fraternity, the Foundation and Pathway to Peace," the pontiff stated

We need, then, to find ways by which all may benefit from the fruits of the earth, not only to avoid the widening gap between those who have more and those who must be content with the crumbs, but above all because it is a question of justice, equality and respect for every human being. In this regard I would like to remind everyone of that necessary universal destination of all goods which is one of the fundamental principles of the Church’s social teaching. Respect for this principle is the essential condition for facilitating an effective and fair access to those essential and primary goods which every person needs and to which he or she has a right.

Those who must be content with the crumbs. Where have I heard that before? Oh, yes:

The call to cut Social Security has an uglier side to it, too. The Washington Post framed the choice as more children in poverty versus more seniors in poverty. The suggestion that we have become a country where those living in poverty fight each other for a handful of crumbs tossed off the tables of the very wealthy is fundamentally wrong. This is about our values, and our values tell us that we don’t build a future by first deciding who among our most vulnerable will be left to starve.

That would be from Senator Warren's November 18 statement.  But Pope Francis, who recommended "sharing the wealth,"  is no mere copycat.  He recommended

not being guided by a “desire for profit” or a “thirst for power.” What is needed is the willingness to “lose ourselves” for the sake of others rather than exploiting them, and to “serve them” instead of oppressing them for our own advantage. “The ‘other’ – whether a person, people or nation – [is to be seen] not just as some kind of instrument, with a work capacity and physical strength to be exploited at low cost and then discarded when no longer useful, but as our ‘neighbour’, a ‘helper’”...

One also sees the need for policies which can lighten an excessive imbalance between incomes. We must not forget the Church’s teaching on the so-called social mortgage, which holds that although it is lawful, as Saint Thomas Aquinas says, and indeed necessary “that people have ownership of goods”, insofar as their use is concerned, “they possess them as not just their own, but common to others as well, in the sense that they can benefit others as well as themselves."

Oh, that excessive imbalance between incomes.  Last year, then-CEO James Skinner pulled in $9,247 per hour for presiding over the gastronomic horror show known as McDonald's.   According to figures compiled by the financial information company NerdWallet, the average salary of a McDonald's hourly worker is $7.73, which means, according to this analysis, "the average McDonald's employee would have to work for 3.86 months straight at an overtime wage or 1.5 times her regular hourly pay- to match what Skinner made in an hour."

While protests of McDonald's policies continue, the company can continue to follow the WalMart model, in which full-time employees in the USA earn $12.67 per hour.  Or it can follow the model of Costco, in which hourly workers average $20.89, and far more employees receive health insurance than at WalMart. Since 2009, Costco's stock price has doubled while its sales have grown 39%. It's not hurting, and its CEO publicly supports an increase in the federal minimum wage.

During my Senate campaign, I ate a number 11 at McDonald's many, many times a week. I know the price on that- $7.19.   According to the data on the analysis of what would happen if we raised the minimum wage to $10.10 over three years, the price increase on that item would be about four cents. So instead of being $7.19 it would be $7.23.

Even before the statements of Warren and the Pope, an Administration spokesman had announced that President Obama supports the Fair Minimum Wage Act, which would raise the federal minimum wage from $ 7.25 per hour to $10.10 per hour. It falls short of the dramatic reforms which Senator Warren and Pope Francis would advocate but, with the folks who are in control of the House and the White House, is at least a beginning. 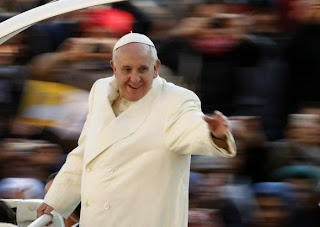 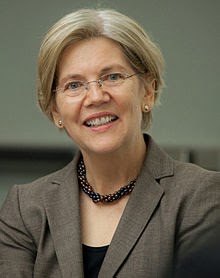