announced on Tuesday that it will install 100,000 tablets nationwide so diners can order food, play video games, and pay the check.

The chain is following on the heels of Chili’s Grill & Bar (EAT), which began installing tablets in its restaurants this year and has said it will have the devices in most of its 1,266 U.S. locations by the first half of 2014. The objectives for each company are the same: They’ve found that tablets cut wait times and lead customers to spend more on appetizers and desserts and to leave bigger tips.

For now, at least, the computers won’t take over for human employees. Applebee’s says it’s not changing staffing levels in restaurants as the tablets are installed.

Salon's Mary Elizabeth Williams, while explaining that she adheres to a "no distractions" policy for her family at its table, nevertheless maintains

... all the pearl-clutching over the fear that Applebee’s is single-handedly going to wreck dining out – especially in a manner that has nothing to do with its food – is pretty silly. Here’s the truth – everything is already wrecked. Family-friendly chains already have television sets blaring out of every corner. And should you find yourself in a Chili’s or similar sometime soon, look around the patrons, especially those with kids. The kids are engrossed in their DS systems, and the parents are taking pictures of their spinach dip to post on Instagram. They’re already not paying attention to each other. What’s one more device on the table, one more distraction?

So the cultural implication of the introduction of tablets in chain restaurants probably is overstated.  But not the economic implications.

As tablets become more common in restaurants, there will be fewer jobs for waiters and waitresses, even though Chili and Applebees are understandably reticent to admit it.  As low-wage employment requiring relatively little training, they serve as entry-level jobs for many people, especially of the youthful variety. The loss of even these low-paying jobs is a metaphor for disturbing trends in the economy.

In his recent speech on the economy, President Obama helpfully gave a nod to "empowering our workers. It’s time to ensure our collective bargaining laws function as they’re supposed to -- (applause) -- so unions have a level playing field to organize for a better deal for workers and better wages for the middle class." Nevertheless, he remains wedded to the notion that growing economic inequality in the nation is due primarily to what economists term "skill-based technological change." He assumes "we’re creating more good-paying jobs in education and health care and business services; we know that we’re going to have a greater and greater portion of our people in the service sector."

Ever faithful to the aim of exporting jobs, the President advocated "a trade agenda that grows exports and works for the middle class." He claimed  "It means streamlining regulations that are outdated or unnecessary or too costly.  And it means coming together around a responsible budget -- one that grows our economy faster right now and shrinks our long-term deficits, one that unwinds the harmful sequester cuts that haven't made a lot of sense -- (applause) -- and then frees up resources to invest in things like the scientific research that's always unleashed new innovation and new industries."   While a "responsible budget" (presumably a reduced one) would retard economic growth in the short term and the idea that regulations kill jobs is largely a conservative/neo-liberal nonsense, the President places his faith in employment which would be created in "new industries," especially those spurred by innovation.

But two months ago, well before the President's remarks, Robert Kuttner explained

There are several problems with the skills hypothesis, but here are the main ones. The four-decade transfer of income to the top had little to do with skill and more to do with opportunities for corporations to weaken labor and capture more of the national product. A recent study by the Economic Policy Institute concluded that deregulation of financial markets has allowed elites to extract abnormal profits that are neither checked by market competition nor restrained by rules—super-profits that economists call “rents.” In this case, rents were available thanks to the deliberate opacity of toxic financial products and trading strategies. Consider: Some of the most “skilled” financial engineers on Wall Street were rewarded with billions for costing the economy trillions. Measured against the economic consequences, the value of their skills was negative. A regulated labor market may be imperfect at aligning pay with skill, but a laissez-faire economy can be even worse.

Conversely, other highly skilled people, such as physicians and research scientists, have had fairly flat incomes. The relative premium to college education, the usual proxy for a skilled workforce, has increased more slowly since the 1990s. Further, there are many occupations in which people learn to work with advanced technology but receive no additional compensation. Today’s autoworker has an impressive set of computer skills but earns less than his father.

As the economist Robert Gordon points out, all of the major advanced economies have had essentially the same technological trends but widely differing income distributions. Further, there is no evidence that the economy’s rate of new demand for skills is above its historic trend.

According to a report from the blue-chip business group The Conference Board, jobs for architects and engineers have declined this year by 18,800, and jobs in computers and mathematics have dropped by another 35,500. Meanwhile, jobs have increased in such low-wage service occupations as transportation (by 36,200) and food service (by 18,800).

A large cottage industry of academic economists and policy advocates contends that America’s widening income inequality is primarily a reflection of new technologies and global competition that leave lesser-skilled workers far behind. So the main cure for widening inequality is said to be a better-educated and -trained workforce. The economist’s term for this supposedly inexorable trend is “skill-biased technological change.”rofessionalized Human Services. A related need is a national policy to convert all jobs caring for the old, the sick, and the young into good professional jobs. Nearly all human--service jobs are underwritten or subsidized by government. Public policy has a choice. We can define child-care and pre-kindergarten positions basically as baby-sitters or train and compensate people who work with preschoolers to the standards of schoolteachers.

If after-school and pre-K jobs pay, say, $40,000 a year rather than $8 an hour, our kids will benefit from a child-development--oriented experience instead of merely custodial care. Better-trained and -compensated professionals will produce better-educated students, and the whole society gains.

Nurse’s aide positions in eldercare facilities and hospitals, likewise, can either be minimum-wage jobs with little training and frequent turnover or they can be part of a continuum of well-trained health professionals. Studies of nursing homes have shown that increased training and pay improve patient outcomes and reduce adverse incidents such as falls and bedsores. The problem is that nursing homes rely heavily on Medicaid reimbursements, which are too low to allow decent pay for nurse’s aides. Professionalizing these occupations will require different national priorities.

The President speaks of "good jobs."  But he believes that will come about through the growing domination of the economy by what used to be termed the "new economy"- education, health care, business, and finance and other "new industries." He urged "investments in education" and brags that his Administration "launched a Race to the Top in our schools" and is "pushing for redesigned high schools that graduate more kids with the technical training and apprenticeships, and in-demand high-tech skills that can lead to a good job." "making sure we empower more Americans with the skills and education they need to compete in a highly competitive global economy.

They will compete for vanishing jobs, sent abroad by companies enabled by the President's trade policy. The training touted by the President is ever less likely to the "lead directly to a good job and a middle-class life" he imagines.Researchers Lawrence Mishel, Heidi Shierholz, and John Schmitt  last month noted

The tasks framework suggests that differences in returns to occupations are an increasingly important determinant of wage dispersion. Using the CPS, we do not find this to be the case.  We find that a large and increasing share of the rise in wage inequality in recent decades (as measured by the increase in the variance of wages) occurred within detailed occupations.  Furthermore, using DiNardo, Fortin, and Lemieux’s reweighting procedure, we do not find that occupations consistently explain a rising share of the change in upper tail and lower tail inequality for either men or women.

The policy implications of the myth promulgated by President Obama are enormous. Without addressing Obama, Kuttner recognized

It's important to appreciate the political and ideological function of the emphasis on worker skills. For conservatives seeking to divert attention from the true causes of inequality and low wages, the focus on skills promotes the scapegoating of public schools and places the blame for paltry pay and job insecurity on workers rather than onchanges in the rules of the system. Blaming high overalll unemploymenton skills deficits also gives conservatives a basis for opposing fiscal stimulus.

It gives conservatives a basis for opposing fiscal stimulus- and conservatives and centrists the opportunity to scapegoat public schools through a school "reform" movement exemplified by Obama's boast that his Administration has "raised standards for teaching and learning." Teachers are to be held responsible for the poor performance on standardized tests without regard to the home environment which can have a devastating impact on student performance.  There is a race to close those schools- and dismiss their teachers- while replacing them with charter schools characterized by poorly paid, non-unionized teachers. The Obama-Duncan Race to the Top, increasingly revealed as a failure, is but part of a larger school reform movement which obscures an economy in which jobs are unavailable (table, below), and wage stagnation the norm, not only among restaurant staff but in the high-technology field.

As Williams contends, the restaurant chains substituting technological capital for human capital probably cannot be held responsible for destroying the American dinner table, already in decline.  But failing to resist the gradual removal of jobs for male and female waiters may be a metaphor for the myth that jobs, and good jobs at that, will flow like manna from the sky for young people acquiring those "high-tech skills" the President touts as a panacea. 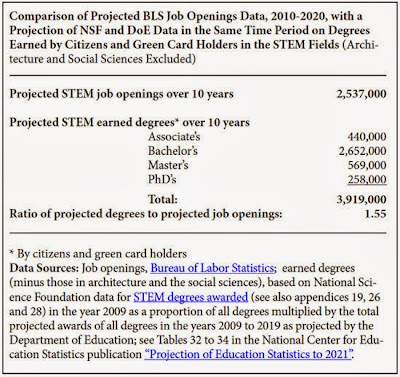