In July, 2012, arguing President Obama "does not believe in American exceptionalism the way we believe in it," Heritage Foundation president Ed Fuelner remarked "in effect you can defend your own future. You can be whatever is possible as long as you are willing to work hard for it and make it happen on your own behalf. You are not automatically cast into a classs system or a certain level of society which you can't rise out of it. You can reallly make a difference. In short, America is not just a place: It is an idea."

In September, 2012 anti-Muslim fanatic Pamela Geller wrote President Obama does "not believe in American exceptionalism at all" because he "has dismantled American hegemony and diminished our standing in the world."    Earlier this month, former Vice-President Dick Cheney claimed on Fox and Friends “I don’t think that Barack Obama believes in the U.S. as an exceptional nation, and the whole concept that the world is a safer place, a more peaceful place, when the U.S. is powerful, able to in fact project its will in various places around the world."

Answering critics like Geller and Cheney who emphasize Obama's reluctance to bomb for the heck of it, in March Obama responded "Ask Osama bin Laden and the 22 out of 30 top Al-Qaeda leaders who’ve been taken off the field whether I engage in appeasement."

Indeed. However, claims of American exceptionalism customarily have not hinged on US foreign policy but rather- as the otherwise misguided Fuelner inferred- the idea that ordinary American citizens can be all that they can be. But as Joseph P. Ferrie wrote in the paper "The End of American Exceptionalism? Mobility in the U.S. Since 1850"

This particular sense of U.S. exceptionalism was increasingly accepted as, throughout the nineteenth century, many astute observers noticed the extremely high degree of social mobility in the United States. As Alexis de Tocqueville toured the 1830s America of flatboats and family farms, of busy workshops and loaded wharves, and of bustling cities and teeming canals, the French aristocrat marveled at the economic activity. But he marveled even more at the extraordinary fluidity of the social relations that lay beneath the economic tumult. Tocqueville described the ease with which families rose and fell in the social hierarchy, and contrasted the mobility he witnessed with the rigidity of the societies known to his European readers:..  At the start of the twentieth century, observers like Werner Sombart continued to ascribe the conservatism of American workers to their unique opportunities for economic and social mobility. America’s high levels of mobility seemed an exception to the patterns of development seen elsewhere.

Things have changed. He adds

Recent research comparing mobility in the modern U.S. to other countries, however, reveals that U.S. mobility is not exceptional today. Since the 1970s, systematic comparisons of intergenerational occupational mobility have revealed that by the second half of the twentieth century, the U.S. was no more mobile than similarly developed countries. Erikson  wrote: “In none of these respects, however, could our findings for the United States  . . . be regarded as ‘exceptional’ when set against those from European nations . . . . [I]t could not be said that [the U.S. differs] more widely from European nations in . . . actual rates and patterns of mobility than do European nations among themselves.” Bjorklund and Jantti find that intergenerational income mobility in the United States is no greater than in Sweden, while income inequality is considerable higher in the United States. Solon concluded in this journal: “At this stage, it seems reasonable to conclude that the United States and the United Kingdom appear to be less mobile societies than are Canada, Finland and Sweden” in the link between the incomes earned by fathers and sons.

And that was written in May, 2005, over eight years ago, before the most recent decline.Recently, Timothy Noah (who has previously addressed the general topic) analyzed the decline in socio-economic mobility in which

In our own time, though, all of that has changed. Americans are moving far less often than in the past, and when they do migrate it is typically no longer from places with low wages to places with higher wages. Rather, it’s the reverse. That helps explain why, since the 1970s, income inequality has gone up and upward mobility has (depending on who you ask) either stagnated or gone down...

The larger reality is that Americans of all ages and stripes were becoming far less likely to move. So, for example, between the 1980s and the 2000s, the percentage of young adults (those aged eighteen to twenty-four) who migrated across state lines declined by 41 percent. Similarly, whether married or single, black or white, parent or childless, factory worker or knowledge worker, educated or not, Americans in any or all of these categories became far less likely to move than their counterparts a generation ago. Even immigrants from abroad are much less likely to move, once they get here, than were foreign immigrants in the past.

Noah finds that none of the usual suspects- aging of the population,  purported increase of two-earner couples, bursting of the housing bubble, growth of the Internet, or ability to find satisfactory employment in one's own area- has had a major impact on the decline of mobility in the U.S.A.  Nonetheless, some people have been moving, but  (with the exception of North Dakota) to areas with relatively limited opportunity. He asks

Maybe you’re thinking that states with lower wages have a higher volume of jobs. Pay people less and you can hire more of them, right? But in fact, most Americans moving across state lines are relocating to places where they’re no more likely to find employment. As the Atlantic’s Jordan Weissman pointed out in December 2012, of the ten states with the highest rates of in-migration, more than half had unemployment rates equal to or higher than the national average...

The larger picture is one in which migration is not only declining but also tends to be away from places where, according to recent studies, young adults have the best chances of moving up the income scale.

Noah concludes that the cost of housing (boosted by exclusionary zoning and restrictions on housing construction), combined with the drop in median household income and the inefficiency of the labor market has contributed most to the inability of people of modest means to move where the greatest economic opportunity lies.

That contributes to the exceptional nature of the USA, in which the Gnni coefficient (map from The Atlantic), a measure of income inequality in which 0.0 represents total equality, is higher in the United States than in most of the industrialized world.  With a coefficient of .450, US income equality ranks behind that in mainland China and India and right up there with the likes of Cameroon, Madagascar, Rwanda, Uganda, and Ecuador. 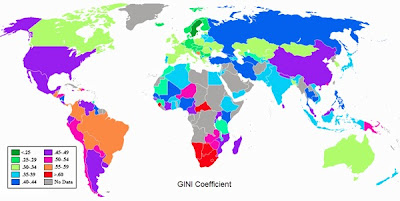 As the graph below from the St. Louis Fed via The Economic Populist indicates, income inequality as measured by the Ginni ratio has risen substantially in the United States of America in the past few decades and especially since 1981 (the first year of the administration of Ronald(6) Wilson(6) Reagan(6), Saint Ronald of 666). 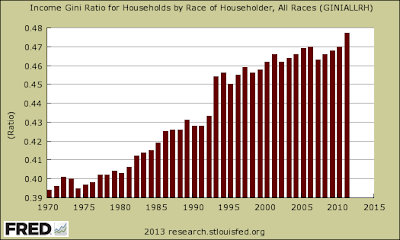 There are causes other than residential immobility which have caused, and are causing this moment, a rise in income inequality in the USA.  But whatever the factors, it is clear that American exceptionalism as it traditionally has been considered and to which American politicians pay homage no longer exists.