Lauren Beth Czekala-Chatham, as they would have said decades ago, is in a pickle.

Of course, decades ago there would have been (fortunately or otherwise) no such problem. Now a  51-year-old Mississippian with two teenage sons from marriage to a man, Czekala-Chatham divorced her husband, and traveled to San Francisco in 2008 to marry Dana Ann Melancon.

But even same-sex marriages sour (who would have thought?) and she moved back to Mississippi, where she lives with her sons, a new girlfriend, and pets, and the desire to get a divorce from Melancon, presumably in California.  However, according to Politico, her lawyer believes her marital property would be "in limbo" because Mississippi will not recognize a divorce from a same-sex marriage.

Melancon, currently residing in Arkansas, currently has no objection to a divorce she originally opposed.  But the Mississippi attorney general's office argues in a motion that the state "has no obligation to give effect to California laws that are contrary to Mississippi's expressly stated public policy. That legitimate policy choice precludes recognition of other States' same sex marriages for any reason, including granting a divorce." (In 2004 an amendment banning same-sex marriages was added to the state's constitution.) In oral arguments Attorney General James Blacklock maintained “There’s no marriage here.  So there can be no divorce.”

There isn't, and there can't.  Intuitively and rationally, Blacklock is right, though the court may find otherwise. No court should be expected to grant a divorce to a wedding which wasn't (a wedding).  Czekala-Chatham and Melancon were married in Calfornia specifically because Mississippi specifically disallows same-sex weddings. Expecting Mississippi to grant a divorce from a marriage its voters banned is, well, ludicrous.

That, of course, doesn't mean Czekala-Chatham will fail to get the divorce she seeks. Divorce law in gay marriage is still evolving, evidently not unlike politicians whose new-found support of the concept (cartoons below from, respectively, Jack Ohman of Tribune Media Services; Michael Ramirez of Creators Syndicate; Drew Sheneman of Tribune Media Services) have moved them to a higher, "evolved," state of existence.

But there is not one but actually two ways in which this issue, a conflict of law and values, can be avoided.   Concurrent with widespread belief in the value of opposite-sex marriage in rearing children, there is growing sentiment that prohibiting gay marriage is unconstitutional under the due protection or the equal protection clause of the 14th Amendment.  The constitutionality of bans will eventually be decided by the US Supreme Court, ought to decide whether the Fourteenth Amendment precludes any state from banning the practice. In the absence of such a decision, there will remain a patchwork of laws, which does the likes of Lauren Beth Czekala-Chatham no good. 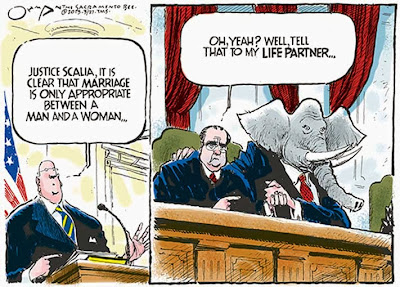 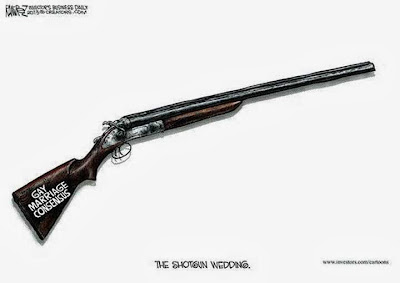 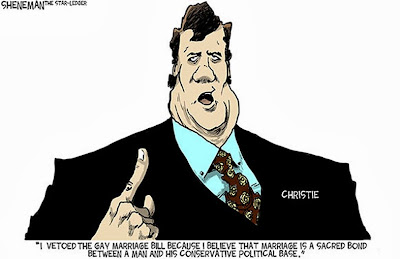