We await Steven Colbert's debut on The Late Show, currently "The Late Show with David Letterman," hosted by the man who was funny 35 years ago.  Shtick gets  old.

Colbert received a lot of encomiums, generally justified, for the finale of "The Colbert Report." Particularly aroused was Time's James Poniewozik, who wrote

.... his final Colbert Report was both a sweet ending and a perfect summation of the show’s spirit — smart and surreal, sly and sincere. The finale nodded to the massive creation that Colbert wrought over nine years, and — as he flew off with Santa, a unicorn Abraham Lincoln, and Alex Trebek — promised something different to come....

But the plaintive strains of “Holland, 1945″ by Neutral Milk Hotel — a favorite band of the honest-to-God Colbert — clued us in to the bittersweetness of this see-you-later. Right up to the end, Stephen Colbert did not break character. But the rest of us can be forgiven if we broke down a little, saying goodbye to America’s greatest, most genuine phony.

That is enough to make any man or woman weep. Still, the last episode was characteristically sound.s a week. Especially fitting was, as Poniewozik put it, the "grand, punchy sing-along of 'We’ll Meet Again,' with a celebrity cast of dozens that demands DVR rewinding" (video immediately below- obviously).


But as appropriate and even heart-rending as the song was, the segment could have been even better.   Nowhere did we learn that "We'll Meet Again" was originally, and most famously, sung by Dame Vera Lynn, who was born Vera Margaret Welch on March 20, 1917. According to Wikipedia, she

is best known for her 1939 recording of the popular song "We'll Meet Again", written by Ross Parker and Hughie Charles; the nostalgic lyrics ("We'll meet again, don't know where, don't know when, but I know we'll meet again some sunny day") were very popular during the war and made the song one of its emblematic hits. During the Phoney War, the Daily Express asked British servicemen to name their favourite musical performers: Vera Lynn came out on top and as a result became known as 'the Forces' Sweetheart'.

In 1941, during the darkest days of the Second World War, Lynn began her own radio programme, Sincerely Yours, sending messages to British troops serving abroad. She and her quartet performed songs most requested by the soldiers. Lynn also visited hospitals to interview new mothers and send personal messages to their husbands overseas.

If Dame Vera Lynn had survived, she would now be 97. Oops! She is still alive, It seems in 2009 the largely apolitical DVL

became the oldest living artist to make it into No. 1 in the British album chart, at the age of 92, passing such veterans of music as American jazz trumpeter Louis Armstrong and French singer Charles Aznavour. Her collection We'll Meet Again: The Very Best of Vera Lynn entered the chart at number 20 on 30 August, and then climbed to number 2 the following week, before reaching the top position, outselling both the Arctic Monkeys and the Beatles. In its third week the album went gold with sales of over 100,000.

In August 2014, Lynn was one of 200 public figures who were signatories to a letter to The Guardian opposing Scottish independence in the run-up to September's referendum on that issue.

Certainly some acknowledgement could have been made of the individual who made this nostalgic and sentimental song famous (as in the video below; current photo beneath that), especially because the song was a favorite of soldiers going off to war and bidding farewell to sweethearts and family, in some cases not to return.

With the recent release of an album of wartime songs marking the tenth anniversary of the  D-Day landings, Dame Vera has become the oldest living artist to have a record in the UK Top 49. So notified,the 97-year-old singer responded "I am delighted of course. It is wonderful to hear these songs again that were at the top of the charts so long ago, and it's warming to think that everyone else is listening to them too."  Listening to them but, at least in one case, neglecting to give proper credit. 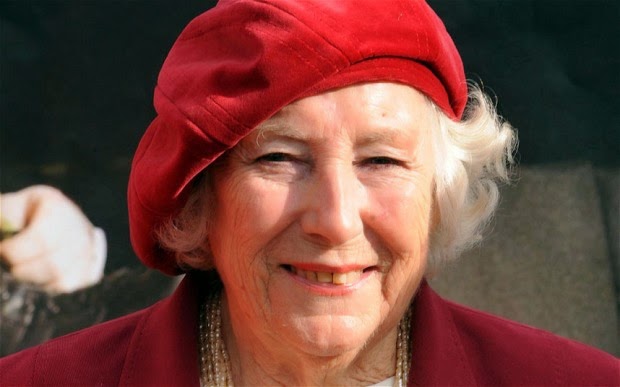