Not Much Enthusiasm For That


Charles Pierce isn't all right (although he's alright).  Slamming a column by The Washington Post's Dana Milbank criticizing what the latter believes has been President Obama's passive approach to Ferguson, Pierce argues "We should make him do things, not the other way around. That's been the fundamental challenge of him from the outset. He's left the hard and necessary work of self-government to a country that simply is no longer up to the job."

That's giving Obama a free pass, given that he is, after all, the President.  During a presidential nominating campaign characterized by little ideological difference, candidate of hope and change Barack Obama emphasized the importance of progressive effort from individuals such as Reverend Martin Luther King Jr., to which Senator Clinton responded "Dr. King's dream began to be realized when President Johnson passed the Civil Rights  Act. It took a president to get it done." Barack Obama had foreshadowed his "make me do  the right thing" approach to the presidency.

The grand-jury decision not to charge the white police officer who killed an unarmed black teenager in Missouri has given Obama another opportunity to show strong and decisive presidential leadership. And, once again, Obama is using the bully pulpit like a 98-pound weakling. If any more chin-stroking goes on at this White House, the president’s advisers are going to have chafe marks on their jawbones....

Democratic lawmakers have privately expressed their wish that Obama go to Ferguson. The Rev. Jesse Jackson, preaching in Portland, Ore., on Sunday, said Obama should go to Ferguson, according to Oregon Public Broadcasting. Obama ally Deval Patrick, the Massachusetts governor, said on NBC that Obama “wants to go” to Ferguson but faces a “quandary” because of an ongoing Justice Department investigation.

Jesus H. Christ On Human Growth Hormones, can we stop already with the wimp business? Thoughtfulness is not weakness. Prudence is not cowardice. The way I know this is that, for eight years, we were subject to the Leadership (!)tm of an ignoramus whose gut told him what to do, and his gut was even dumber than he was, and the whole country nearly fell apart. Given the choice between that and chin-stroking, I know which way I'm leaning....

Let those "Democratic lawmakers" show themselves or shut up. Let them go march in Ferguson. Nothing's stopping them. And would anyone like to guess what the reaction would be if the president went to Ferguson on the advice of Jesse Jackson? The president -- who did, as we have been endlessly reminded by the people who worked the hardest to sabotage his entire administration, promise to make us one country again -- doing the bidding of the Mayor of Hymietown? Marty Peretz would have a stroke.

And Marty Peretz, former neo-con publisher of The New Republic, is a Democrat.  By the time Republicans got through with Obama for taking Jesse Jackson up on his suggestion, they'd have half the country convinced Henry Louis Gates Jr. (he of the "beer summit," which photo is below)) and Reverend Jeremiah Wright are Barack Obama's gay parents. (O.K.; only Pierce can write like Pierce.) 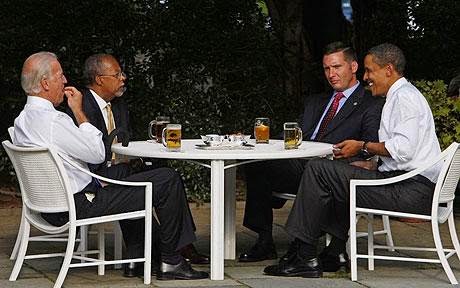 Admit it. You knew it was coming- the national conversation on race thing. Milbank adds

They’re not going well, and Obama, by going to Ferguson and talking about Ferguson elsewhere around the country, could start the conversation about race we always talk about but never seem to have. The nation’s first black president is in a unique position to quell protests, but also to give voice to legitimate grievances about the justice system.

The only thing most conservatives want less than a conversation about race is an opinion about why we don't want a conversation on race.  It was that way when in the year after Senator Obama was elected President, Attorney General Holder noted "Though this nation has proudly thought of itself as an ethnic melting pot, in things racial we have always been, and continue to be, in too many ways, essentially a nation of cowards.”

In which Dana Milbank proves that the weather's lovely on the moons of Neptune, where he apparently has spent the past six years. Here's the simple truth. The country doesn't want a conversation on race, especially one led by the blah president whose simple legitimacy has been under assault since the moment his hand came off the Bible. The country doesn't want a conversation on race unless it is sure from the outset that white people will "win" it. The idea that the president could jump-start this conversation, let alone "give voice" to black people's complaints about (largely) white policemen who are killing them, and not be greeted with the shitstorm sharknado of all time, is so fantastical that it makes me wonder whether I even read Milbank correctly. Jon Stewart put together a helpful survey of the shitstorm already raging on the right, and that's while the president is only stroking his chin on the topic. If the president actually did what Milbank is suggesting, any conversation on race that might begin would quickly be drowned out by the din of the thousands of tiny hammers that fashion the ideas in Sean Hannity's skull. We're not having a serious conversation about race because, as a nation, we're a bunch of chickenshits who aren't interested in being citizens ourselves, let alone extending that title to people whom we consider less than we are.

The less honest conservatives argue we proved we have no race problem by electing a black president whom they didn't vote for and now want impeached.

The more honest  conservatives are afraid of being called "racist" if  there is a discussion about race per se, and so speak around it, as in the push to suppress the votes of the people they have proven they have no bias against.  They play the victim enthusiastically but to be fair (and accurate), it is analogous to "just because I'm paranoid doesn't mean they're not out to get me."

As it happens- and whatever Obama's real views are about the controversy- that was largely the tone of the President's remarks after announcement that the grand jury had decided not to indict Officer Wilson.  Focused on the need to "make more progress," the President stated "there's never an excuse for violence.... but those who are only interested in focusing on the violence and just want the problem to go away need to recognize that we do have work to do here, and we shouldn't try to paper it over."    That is genuinely fair and balanced.

Attempting to stay positive, President Obama emphasized both preventing crime and "working to train officials so that law enforcement conducts itself in a way that is fair to everybody. "  He did not mention a need for an honest, national conversation on race. Alas, the constituency for that is distressingly small.