Other Than Thinking It's A Dandy Idea, Limbaugh Is Right About This

To anyone outside of the Republican media bubble, Rush Limbaugh sounded crazy. The only factual statement in the entire segment was that Republicans won the 2014 election. Everything else that came out of Limbaugh’s mouth was combination of borderline mental illness and fantasy.

Perhaps. But this is the time- shortly after an election- to appear crazy, after which you, and the opinion you propounded, may be forgotten.  The portion Easley finds relevant has Rush stating (video below)


Does that not matter? You keep talking polls to me, and I’ve got the. The essence of a poll is an election, and I’ve got two of them. And we would have won the White House in 2012 if four million Republicans hadn’t have stayed home.
…
What does it matter? They won. The point is that this is a trick. I think the shutdown is a trick. Here is what it really means, Chris. The Republicans want what Obama wants on immigration, and they are using the government shutdown as an excuse to not stop him. Because the truth of the matter is they agree with it. Romney agrees with it. Jeb Bush agrees with it. Chamber of Commerce agrees with it. Obviously, the Republican establishment doesn’t want to stop Obama on comprehensive immigration reform….And very conveniently, here’s this government shutdown. Oh, we can’t act. We can’t act because they’ll blame us for shutting down the government. They’ll blame us for shutting down the government.

I think it’s absurd. I think it’s ridiculous, and the American people are being let down here. They’re voting. They’re expressing their desires. They want this stuff stopped, and the Republican Party’s not listening.


Speaking in December 2014, Limbaugh has two good points. Establishment Repubs are feigning most of their indignation over immigration.  Their donor base is not hostile to immigration reform and the GOP probably cannot legally stop it, anyway.

Additionally, the voters comprising the popular base of the Repub Party want a government shutdown, virtually anything they can be sold as stopping Obama, even if it really damages only the country. Perhaps The Big Money Boyz (as Digby often refers to them) are wary but only because they fear the political backlash. Their concerns are short-lived and a shutdown would do nothing to undermine their faith that the GOP is sympatico with their needs and desires.

It would  hurt the American people, of course, but that is not the concern of the donor base nor the belief of the popular base.  Rush Limbaugh understands the impact upon the nation but realizes that strategically, that's an asset, not a bug. In late August, when Mitch McConnell threatened a government shutdown were the GOP to regain (as it did) the Senate through elections 75 days later, Steve M. questioned the conventional judgement that a threat to shut down the federal government would backfire against the Party. He argued

Hell, even the public-opinion impact of the government shutdown we experienced last year was evanescent -- as soon as the shutdown was over, the Democrats' advantage over Republicans on generic-ballot poll questions began to shrink (and eventually reverse), and it took a lot less than two and a half months.

He demonstrated this with the graph for which SM explained, "The blue hump in the middle is the fleeting moment when Democrats had the greatest advantage over Republicans; that moment ended almost immediately after the shutdown did." 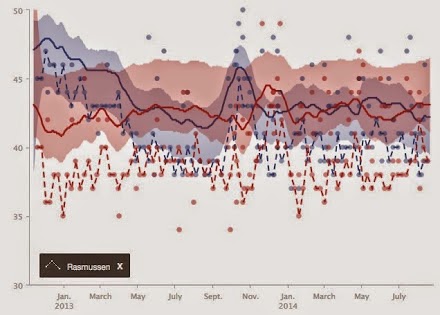 It's not that Limbaugh hadn't, as Joan Walsh puts it, "brought the lies, claiming 'the only thing that happened in that shutdown was Barack Obama closed (....) the World War II memorial to World War II vets' and 'shut down some White House tours.'"     The shutdown, she noted, "cost $24 billion in lost economic activity," hardly a triviality.

But to the GOP that is mere collateral damage. If few people remembered for even three months the government shutdown of 2013, they're unlikely to remember in late 2016 one which engineered in early 2014. What voters probably would keep in mind is their dissatisfaction with government, exacerbated by the shutdown but which they mostly would not attribute to it.  And the GOP is not considered  the party of government.