Fear Of The Vote

Rush Limbaugh sounds nostalgic for the good old days. But don't believe him, although on Tuesday he longingly stated of European immigrants to the USA in the 1920s

Now, they wanted to be.  They wanted to become Americans.  They had to learn English. They learned American custom.  They became acquainted with American holidays.  They studied for citizenship.  All of this they wanted.  And it took that many years to assimilate.

Don't believe him, because Rush added "There's not a person I know that wants to deport, try to round up 15 or 20 million people and send 'em packing.  It isn't practical.  It isn't going to happen."  So he wants illegal immigrants to remain but argues "these people" (who apparently are the "anti-American left")

don't want these people to ever be self-reliant.  They want these people to be voting as dependent incompetents.  The political powers that be that are trying to make this happen see a wave of potential registered voters who are unskilled and uneducated and will never be self-reliant. Therefore they are always going to need support from government.  They are seeking dutiful, respectful, appreciative dependents.

This consistent with the immigration position Limbaugh has taken in the past, as well as the obsession he and most other conservatives have with vote fraud that doesn't exist.  Rush does not toe the Chamber of Commerce line. He doesn't want illegal immigrants to remain so they can mow his lawn or bus his table at a fine restaurant, or even because they would depress the wage scale, though that would be a collateral benefit.

They may stay as long as they don't vote (photo, below, of line at Florida polling place in 2012, from the official student newspaper of St. Petersburg College).  Beholden to psychological projection, Rush believes Democrats want "amnesty" merely to gain a whole raft of new voters, rather than because of a humanitarian impulse and instinct to help the downtrodden. 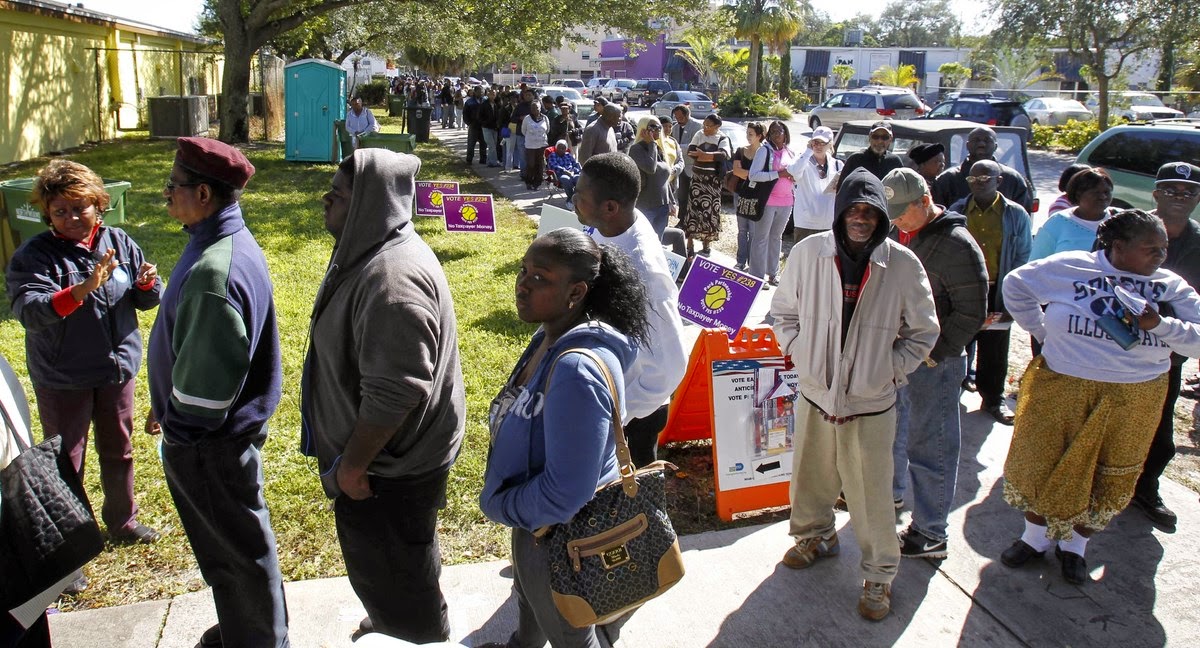 The Repub Party already has lost the political battle over illegal immigration.   That was displayed during campaign 2012 when GOP presidential nominee Mitt Romney urged illegal immigrants to "self-deport" and in response to the firestorm which erupted, Republicans barely defended their candidate or themselves. Following a near-disaster at the polls that November, the GOP attempted an "autopsy" which suggested the Party "reboot" itself in an effort to woo Hispanics and others. After the President's recent executive order on immigration, a lot of huffing and puffing ensued but as Dana Milbank wrote at the time

There will be more spluttering and stomping and shouting about Obama’s illegal and unconstitutional activities, but pay no attention. In the immigration stare-down, Republicans have already blinked. Unwilling to squander their new majority and public support by risking a government shutdown, they are quickly falling in line behind symbolic protests.

Rush Limbaugh, clothing his opposition as realism, opposes deporting illegal immigrants, As with the restoration of diplomatic relations with Cuba announced Wednesday, the GOP has lost the political war and therefore has nothing positive to recommend and no policy except to oppose Barack Obama.

And so it is now that Rush Limbaugh says keep 'em here, but don't allow them to assimilate and become citizens. If they aren't afforded the rights and privileges of Americans, including the right to vote, they can stay as long as they want,  There is a reason the title of Limbaugh's segment is "Conservatives Don't Hate Immigrants!" They don't hate immigrants. They hate voters.