Immigration activists repeatedly interrupted former secretary of state Hillary Clinton Thursday as she campaigned here for Lt. Gov. Anthony Brown, who is running for governor as a Democrat....

So-called DREAMers, young, undocumented immigrants, have become a semi-regular thorn in Clinton’s side, heckling her at several events in recent months as she’s campaigned for Democrats and promoted her book. But Thursday’s interruptions were the largest yet, involving at least a dozen protesters affiliated with the group United We Dream interrupting her speech at least four times.

Mrs. Clinton explained to the crowd that as a U.S. Senator she had sponsored the DREAM Act, which passed the House but was stymied as the Senate failed to gain cloture.  But the bill became the basis of an executive order, issued by President Obama in June, 2012, which prohibited the deportation (upon meeting certain criteria) of young people brought illegally to the USA as children. (photo, from Brendan Smialowski/AFP/Getty Images, from the announcement by the man smart enough, among few others, to recognize the slippery slope he likely had created.) 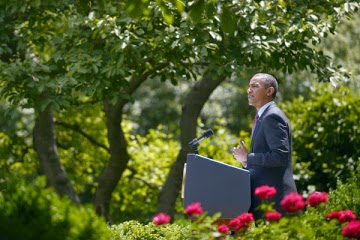 It has escaped the attention of practically everyone that the former First Lady and Senator evidently has been ahead of the times on another aspect of immigration policy.  Politico reports

The Supreme Court ruled Wednesday that Arizona must offer driver’s licenses to thousands of young immigrants who entered the United States illegally but were protected from deportation by a presidential order in 2012, The Associated Press reports.

In a 6-3 decision, justices denied Gov. Jan Brewer’s request for a stay on a circuit court ruling. Justices Samuel Alito, Antonin Scalia and Clarence Thomas said they would have granted the stay.

The ruling upheld a previous decision from the 9th U.S. Circuit Court of Appeals that ordered a stop to Brewer’s executive action that would have kept 20,000 from getting licenses. The judge hasn’t yet ruled on the circuit court’s order, and it’s unknown when that would happen, AP reports.

It seems the- or a- battle over illegal immigrants being afforded drivers' licenses is an old one, or at least seven years old. For it was in late October, 2007, during a debate among Democratic presidential hopefuls, that this exchange took place:

SEN. CLINTON: Well, what Governor Spitzer is trying to do is fill the vacuum left by the failure of this administration to bring about comprehensive immigration reform. We know in New York we have several million at any one time who are in New York illegally. They are undocumented workers. They are driving on our roads. The possibility of them having an accident that harms themselves or others is just a matter of the odds. It's probability. So what Governor Spitzer is trying to do is to fill the vacuum.

I believe we need to get back to comprehensive immigration reform because no state, no matter how well-intentioned, can fill this gap.

There needs to be federal action on immigration reform.

MR. RUSSERT: Does anyone here believe an illegal immigrant should not have a driver's license?

MR. RUSSERT: An illegal immigrant should not have a driver's license.

SEN. DODD: This is a privilege. And look, I'm as forthright and progressive on immigration policy as anyone here, but we're dealing with a serious problem here, we need to have people come forward. The idea that we're going to extend this privilege here of a driver's license, I think, is troublesome. And I think the American people are reacting to it.

MR. WILLIAMS: Who else? Senator --

SEN. CLINTON: I just want to add, I did not say that it should be done, but I certainly recognize why Governor Spitzer is trying to do it. And we have failed --

SEN. DODD: Wait a minute. No, no, no. You said yes, you thought it made sense to do it.

` SEN. CLINTON: No, I didn't, Chris. But the point is, what are we going to do with all these illegal immigrants who are (driving ?) -- (inaudible)?

SEN. DODD: Well, that's a legitimate issue. But driver's license goes too far, in my view.

SEN. CLINTON: Well, you may say that, but what is the identification if somebody runs into you today who is an undocumented worker --

SEN. DODD: There's ways of dealing with that.

SEN. DODD: This is a privilege, not a right.

SEN. CLINTON: Well, what Governor Spitzer has agreed to do is to have three different licenses; one that provides identification for actually going onto airplanes and other kinds of security issues, another which is an ordinary driver's license, and then a special card that identifies the people who would be on the road.

SEN. CLINTON: So it's not the full privilege.

MR. RUSSERT: Senator Clinton, I just want to make sure what I heard. Do you, the New York Senator Hillary Clinton, support the New York governor's plan to give illegal immigrants a driver's license? You told the Nashua, New Hampshire, paper it made a lot of sense.

MR. RUSSERT: Do you support his plan?

SEN. CLINTON: You know, Tim, this is where everybody plays gotcha. It makes a lot of sense. What is the governor supposed to do? He is dealing with a serious problem. We have failed, and George Bush has failed.

Do I think this is the best thing for any governor to do? No. But do I understand the sense of real desperation, trying to get a handle on this? Remember, in New York we want to know who's in New York. We want people to come out of the shadows. He's making an honest effort to do it. We should have passed immigration reform.

It should not be lost to history that Hillary Clinton, before hit at this debate with the question of drivers' licenses, had been the overwhelming front-runner and prohibitive favorite for the Democratic nomination for president. In the wake of the controversy Clinton's response engendered, she still was a strong, but not prohibitive, favorite.   And (warning: cliche ahead) the rest is history. There will be no Democratic criticism of a court ruling which is consistent with Clinton's apparent position in 2007.

Governor Jan Brewer's administration had requested the stay from the US Supreme Court because if he state prevails in its appeal to the High Court, the licenses would have to be pulled. Good luck trying to do that.

Good luck, too, if the case ends up before the High Court, given that it was corporatist Justice Anthony Kennedy, who is amusingly often referred to as the Court's "swing" vote, who denied the stay. Speculation would have it that Kennedy, hostile to practically everything progressive except same-sex marriage, would vote to uphold the ruling from the 9th US Circuit Court of Appeals. The majority opinion, if it comes to pass, would be a fascinating read, particularly that thing about driving being a privilege, not a right.