At this point, I have to say he's bringing it on himself. He should have apologized, not for the murder. He's not responsible for the murder. He was elected by the people and he shouldn't resign.But he did create an atmosphere of anti-police bias- and feeling for a long, long time. He did it when he ran as a candidate then he continued it into being mayor...

Giuliani is a very typical white, wingnut authoritarian who sees absolutely nothing wrong with harassing innocent citizens of color. Anyone who questions it is an un-American cop-hater. And for the past few days, he and others like him have been pontificating virtually unopposed on television.

It is difficult- and highly dangerous- while the attention of the American people is turned to the ambush killing of police officers to be heard saying "but as to the underlying problem...." Nevertheless, though not a wingnut, the ex-mayor is an authoritarian.

There is a common thread among the conservatives criticizing Mayor DeBlasio, and it's not racism. Or at least it's not blatant racism..

After police officers turned their backs nine days ago to the mayor when he entered a hospital to pay his respects to the families of the murder victims, Sergeants Benevolent Association President Ed Mullins stated “It is your failed policies and actions that enabled this tragedy to occur. I only hope and pray that more of these ambushes and executions do not happen again.”  The statement from Patrolmen's Benevolent Association President Patrick Lynch read “That blood on the hands starts on the steps of City Hall in the office of the mayor.  When these funerals are over, those responsible will be called on the carpet and held accountable.”

(Outside the Ramos funeral, police officers, hundreds of them, demonstrated their disgust with DeBlasio; as shown in the photo, below, from Sharon Stapleton/Reuters. But contrary to most reports, they did not turn their backs on the Mayor. They turned their backs to a video of him delivering the eulogy.  Big difference.) 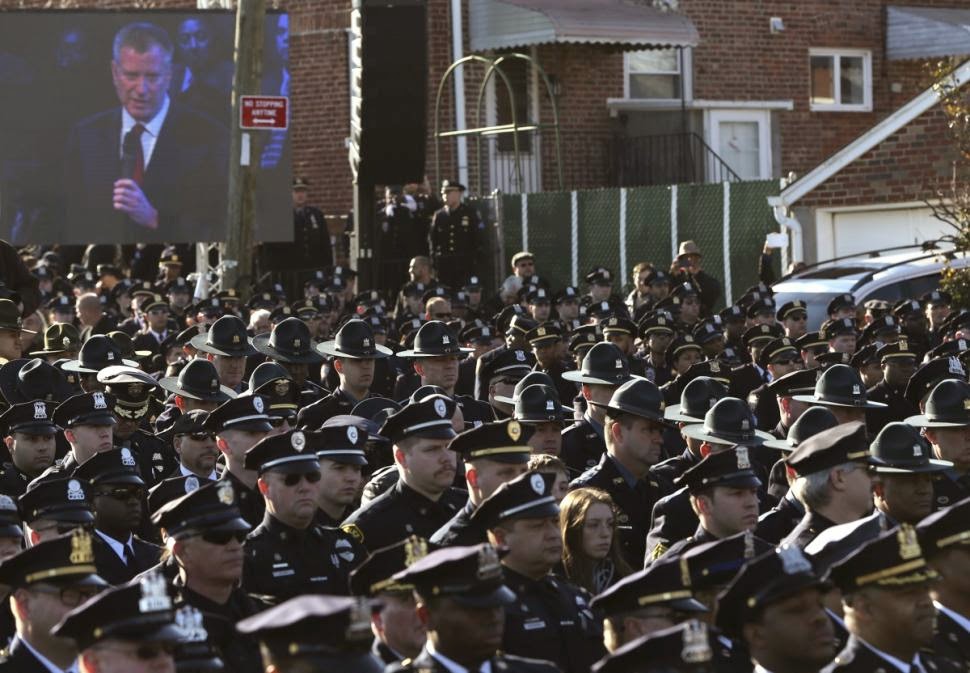 On the day of the funeral for Officer Ramos, former (Republican) New York Governor George Pataki twitted "Sickened by these barbaric acts, which sadly are a predictable outcome of divisive anti-cop rhetoric of eric holder & mayor deblasio."  It appears no one has asked the New York Republican why he does not give Eric Holder the respect of calling him Attorney General Eric Holder, nor what barbaric acts he was referring to, given that the murder of the two police officers constituted one incident.  Accuracy optional.

While on vacation, Bill O'Reily called in to his own show to call for the resignation of Deblasio, whom he claimed has "disgraced the officer of mayor of New York City." He called DeBlasio a "far left individual, who is incompetent" and "has been anti-police his whole career." Worst yet, he is, according to O'Reilly, a good friend of Al Sharpton.

Something is missing... something. It is an example of how he has "created(d) an atmosphere of anti-police bias," why "he has blood on his hands," what "the divisive anti-cop rhetoric" is, or how he always "has been anti-police."

It is clear, however, that it is far less anything the Mayor has done or threatened to do than with what he has said.  That would be DeBlasio's remarks on December 3 that

Chirlane and I have had to talk to Dante for years about the dangers that he may face. A good young man, law-abiding young man who would never think to do anything wrong. And yet, because of a history that still hangs over us, the dangers he may face, we’ve had to literally train him—as families have all over this city for decades—in how to take special care in any encounter he has with the police officers who are there to protect him.

There are so many families in this city who feel that each and every night. Is my child safe? And not just from some of the painful realities—crime and violence in some of our neighborhoods—but is safe from the very people they want to have faith in as their protectors. That’s the reality.

At the conclusion of the segment (beginning approximately 4:20), Giuliani took a stab at it. But he did not acknowledge that circumstances have changed in the 50 years since he was a boy or that blacks have a particular reason to be wary of the police.

Nor would he mention the words "black" or "white" or the remarks by Mayor DeBlasio which apparently exorcised him.  There is a determination among the Mayor's critics, who consider the comments about Dante to be a swipe at the police, to cite those comments themselves.

One of the greatest journalists of American history would sign off his half-hour news broadcast by stating "courage" (video below). He had a lot of it, but the detractors of the mayor of New York City, some vociferous and even nasty, have so very little.