The charge against the government funding bill was led by Senator Elizabeth Warren. Recognizing that repeal of the swaps push-out provision in Dodd-Frank- thus allowing banks to trade derivatives with the taxpayers on the hook for losses- would endanger the national economy, she noted

You know, it was literally never introduced in the Senate. It had no hearings. There was no discussion about this. And let's keep in mind about this provision, this is a provision that Citigroup lobbyists literally wrote. And then, just to make sure that everybody got the point, Jamie Dimon, the CEO of JPMorgan, personally made phone calls to House members to push for this change.

Fresh off her unsuccessful effort to save Wall Street from itself, and the American people  from greed unhinged, Warren now is fighting the nomination of Antonio Weiss to be Under Secretary for Domestic Finance at the Treasury Department.  Speaking at the "Managing the Economy" conference, the Senator explained Weiss has "spent the past twenty years at the investment bank Lazard" and

He has focused on international corporate mergers and companies buying and selling each other. It may be interesting, challenging work, but it does not sufficiently qualify him to oversee consumer protection and domestic regulatory functions at the Treasury that are a critical part of the job. In addition to his lack of basic qualifications, Mr. Weiss was part of the Burger King inversion deal that moved the U.S. company to Canada as part of a merger that would cut down on its tax obligations. Also note that Mr. Weiss’s friends at Lazard are giving him a golden parachute valued at about $20 millionas he goes into government service. For me, this is one spin of the revolving door too many. Enough is enough. The response to these concerns has been, well, let’s just say, loud.

Author and journalist H.A. Goodman, summarizing the first effort but not the latter, recently argued in The Hill  "America needs a president who isn’t intimidated by Wall Street. We need a president willing to save Wall Street from itself and save the American people from another future filled with economic catastrophes and bailouts."

Needs, yes; will get, probably not.  It is common wisdom inside and outside the Beltway that Elizabeth Warren will not run for President in 2016. That (near) assumption is probably valid, given there is a glide path to the Democratic nomination for Hillary Clinton.  Assuming Clinton announces for the nomination and does not meet any major obstacles, Warren, Clinton acolyte Kirsten Gillibrand (D-NY), New York Governor Andrew Cuomo (heaven forbid), and, probably, former Maryland Governor Martin O'Malley will sit it out.

The prevailing belief is that the latter three individuals will decline to run because- and only because- it is a doomed effort. Warren, however, is more interested in the Senate, where she has staked out a justified claim as a leader in financial issues.

One can never know for sure what lurks in the heart, or mind, of another individual. But this week we got an idea in the case of the Massachusetts senator, and it's not to  remain a Massachusetts senator forever.  An advisory panel of HHS has recommended the Blood Products Advisory Panel of the Food and Drug Administration loosen its rule for accepting blood donations by gay men. Adopted in 1983, the regulation prohibits donations by any homosexual male (and yes; "homosexual male" is a legitimate term, not unlike "heterosexual male") who has had sex even once since 1977.  The HHS panel, however, believes that blood may be taken if the guy hasn't had sex with another man within the past year.

However, "a coalition of 80 senators and House members spearheaded by the Massachusetts senator," reports Mother Jones, has sent a letter (note: "MSM" is "men having sex with men") to the Secretary of HHS in which it cites a need to "embrace science" (thus annoying the GOP) and argues

Our current blood donation policy prevents many healthy gay and bisexual men from donation blood for their entire lives. The ACBTSA's proposed policy change would, in practice, leave that lifetime ban in place for the vast majority of MSM, even those who are healthy and low-risk. Both policies are discriminatory, and both approaches are unacceptable. Low-risk individuals who wish to donate blood and help to save lives should not be categorically excluded because of outdated stereotypes.

Mrs. Warren (photo below from Faith Ninnivagi/AP and not of Warren celebrating another unfortunate Patriots touchdown) has been critical of HHS policy for over a year, so the letter Mother Jones says she "spearheaded" does not mean she will run for President in 2016. Or wants to. Or even that it's a legitimate basis for a blog post. Still, support for same-sex marriage, among national Democrats, is so 2013. It's old hat and these members of Congress realize it is time to move beyond that to other issues affecting the gay community.

But the Christmas season, it is said, is a time for hope (and all other seasons?). Senator Warren's leadership in this area, outside her area of (unmatched) expertise, suggests that she is thinking beyond Massachusetts and beyond the economics of banking. Some day, in some far off universe, there may be a president from the Democratic wing of the Democratic Party. 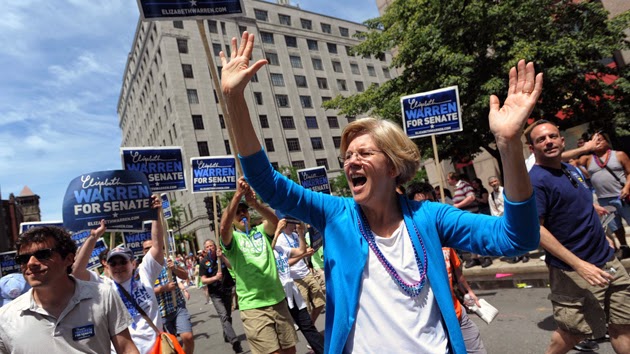