He Did Not End Racism, Eliminate World Poverty, And Establish Global Peace. He's A Failure.

"I'm not a doctor but I play one on today" actor/doctor Chris Robinson memorably admitted while promoting Vicks Formula 44 on television in 1984.

One could hardly criticize him Dick Morris if one day he similarly admitted "I'm not an ignoramus but I play one in the media."  The former political consultant now writes a weekly column for The New York Post and is a talk show host in Philadelphia. His hatred for Hillary Clinton and Barack Obama-eclipsed not even by Rush Limbaugh-* recently was on display in an interview reported on conservative media outlet Newsmax.

So, too, was his dubious approach to race relations.  Morris spoke to John Bachman of Newsmax TV about the killing by police of Michael Brown in Ferguson, Missouri and of Eric Garner in Staten Island, NY.   He stated "that atomization — that breaking apart of our country" was worsened "by the unfortunate fact that there will never be a trial in Ferguson, Missouri."  After expressing deep concern about America's racial divide, Morris responded to the ambush and execution of two New York City police officers by arguing "these kinds of retaliation can be expected, unfortunately."

Gunman Ismaaily Brinsley had shot his girlfriend (who, judging by her name, probably is black) earlier that day. Still, Morris (and Fox News) bought Brinsley's line that he had murdered the police officers as revenge for the killing of Brown and of Garner.  Sometimes conservatism means never having to question the word of a murderer.

But Dick's real aim, as it usually is, was to attack President Obama. He thus claimed "Obama cannot persist in this policy of atomizing the country into blacks, Latinos, gays, single white women and environmentalists, and then saying he's going to appeal to those special-interest groups as special groups."

The man in the Oval Office is a hater, I tell you! Following Garner's death, President Obama explained

And I say that as somebody who believes that law enforcement has an incredibly difficult job; that every man or woman in uniform are putting their lives at risk to protect us; that they have the right to come home, just like we do from our jobs; that there’s real crime out there that they’ve got to tackle day in and day out -- but that they’re only going to be able to do their job effectively if everybody has confidence in the system.

And right now, unfortunately, we are seeing too many instances where people just do not have confidence that folks are being treated fairly. And in some cases, those may be misperceptions; but in some cases, that’s a reality. And it is incumbent upon all of us, as Americans, regardless of race, region, faith, that we recognize this is an American problem, and not just a black problem or a brown problem or a Native American problem.

Yep, he's always busy dividing Americans by race and ethnicity. So, too, does he pander to gay people, such as waiting till a plurality of the nation- including his running mate, the Vice-President, in a public way- supported same-sex marriage before he himself stated it was O.K.  And then there is the radical environmentalist who has been noncommittal about a pipeline carrying the dirtiest oil in the world through the mid-section of the country- where it threatens a critical aquifer- to the Gulf Coast so that mainland China can have cheap oil.

You just can't get more beholden to special-interest groups than that, apparently.

Even this, however, is secondary to the real bur on Dick's saddle.  It's difficult to maintain with a straight face that race relations have deteriorated because of the election of Barack Obama, who was to have united the country, but against whom the right, in its concern about race relations, voted against.  (If that's hard to follow, it's because the right's argument makes no sense.) But with no apparent sense of shame, Morris contends "There was a feeling that by electing an African-American president, we would establish that the U.S. had overcome racism and put our unfortunate past behind us, and now this belies that."

It is not by coincidence that the right does not say who possessed this "feeling."  It certainly was not the left- liberals, progressives, or whomever- which always has noted that racism is embedded deep in the American psyche, and which never claimed or believed that one election would wipe it out. Rather it is conservatives who retroactively determined that Barack Obama's election was supposed to eliminate racial hostility and disparity.  There would at least have been a shred of intellectual honesty had conservatives advanced this theory of racial harmony before the election. But that would have encouraged individuals (centrists, primarily) to vote for Obama and, anyway, they would have been laughed out of the figurative political arena.

But no, the theory gained currency only after the election, the better to establish an extraordinarily high standard for this president, or any president, to meet.  Had Obama cleared that bar,he would have been a true miracle worker, at which point conservatives would have accused him of posing as Jesus Christ.

But give Dick Morris credit for consistency. His website currently blares "Join Me For Lunch: Your Money Is NOT Safe In The Bank Or Your Pension."  That is the same tonic he was selling on WPHT AM 1210 in Philadelphia on October 15 at the moment when the Dow Jones Average (during a tumultuous day, as seen below) was at, or very close to, 16,100.   Don't wait till dinner! Get out of the market, now! he warned. Today, it is at 18,033.74. 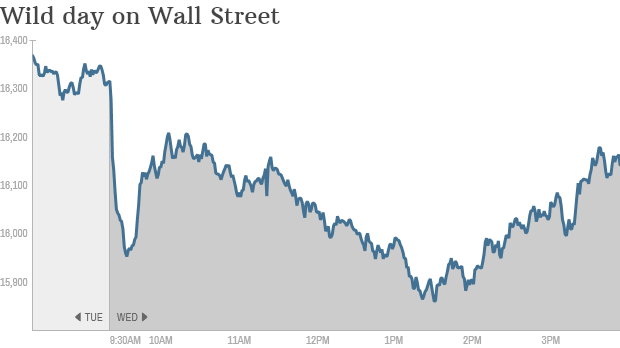 *Totally true- though unlike Limbaugh, he is right occasionally.