The Constitutional Right You Never Noticed


It was bad enough when President George W. Bush in October, 2001 declared "We cannot let the terrorists achieve the objective of frightening our nation to the point where we don't conduct business or people don't shop." Yes, that will show the terrorists: they won't even notice the body searches at airports, massive government spying on domestic and international communications, or a war that takes 3,000-4,000 young American lives. Only our Sears purchases.

Shopping. That must have been the eleventh amendment mysteriously missing from the U.S. Constitution. But so is going to the movie of our choice, for Newswer reports

After Sony's U-turn on releasing The Interview, the controversial movie played in 331 independent cinemas across America on Christmas Day, often to sellout crowds. Many moviegoers made it clear they were there to take a political stand, with one ticket seller in California dressed as "Uncle Sam-ty Claus," the New York Times reports. "We are taking a stand for freedom," the manager of the Cinema Village East in Manhattan tells the AP. "We want to show the world that Americans will not be told what we can or cannot watch. Personally, I am not afraid."

We may not demand improved police-community relations so that lives are not needlessly taken, appropriations for weapons systems even the Pentagon doesn't want,  nor increased wages commensurate as productivity climbs, but we must be allowed to watch a comedy about assassinating a foreign leader. Freedom, apparently.

Also, awesomeness.  After release of the Senate intelligence committee on torture, Fox News host Andrea Tantaros on a panel  (video, below; cartoon with John Brennan, Dick Cheney,Michael Hayden, and Tanataros at bottom, from Matt Bors) ranted


That was awesome. However,although movie fans in 331 theaters were given the opportunity to pay to see a movie on Christmas, earlier this year the Justice Integrity Project noted

The United States experienced a major decline in press freedom over the past year according to the new annual study announced Feb. 11 by Reporters Without Borders. The world's largest press freedom group announced also sharp declines in the rank of the Central African Republic and Guatemala, and "marked improvements" for Ecuador, Bolivia and South Africa.

In America's largest city, reporters get roughed up by guys in uniform for photographing arrests. Ghana, South Africa, and Uruguay allow the press more freedom than does the U.S. government. But we get to watch movies. Awesome. 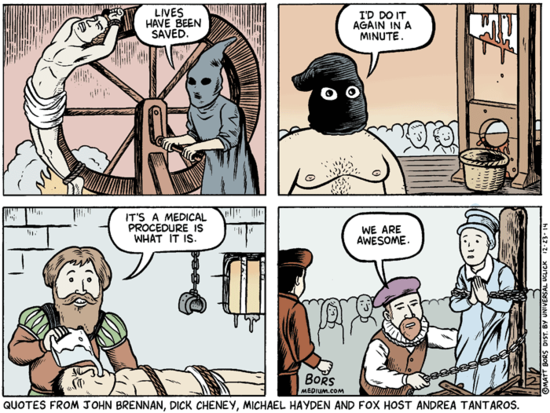 Email ThisBlogThis!Share to TwitterShare to FacebookShare to Pinterest
Labels: torture