Maybe Without The President

Ezra Klein makes a good point when he writes

A little bit later, however, he went off the rails, claiming "for the Democrats negotiating the bill, the coming of the Republican Congress was an omnipresent threat. It's why the White House ended up lobbying House Democrats to pass a bill nobody liked."

But while "nobody" presumably included the 'no' voters and some Democrats who feared what instead might come out of a Congress with both chambers controlled by Republicans, there was at least one entity which really, really did like the bill.  On Tuesday- before passage by the House- Ben Protess of The New York Times reported

The bill that Citigroup helped draft: This bill would repeal one of the more contentious provisions in Dodd Frank, a requirement that banks “push out” some derivatives trading into separate units that are not backed by the government’s deposit insurance fund. The proponents of the push-out rule argued that it would isolate risky trading from parts of a bank eligible for a government bailout.

The provision exempted many derivatives from the push-out requirement, but some Republicans have long proposed eliminating the provision altogether.

In late 2011, Citigroup floated a compromise. The bank’s lobbyists sent around a proposal that simply exempted a wider array of derivatives from the push-out plan.

As The New York Times reported last year, lawmakers adopted nearly every word of Citigroup’s plan in drafting a bill. The bank’s recommendations are reflected in more than 70 of the 85 lines of that bill.

“I am disgusted that in a back room deal, some members and lobbyists for the largest banks are trying to undo a seminal component of the Wall Street Reform Act,” Representative Maxine Waters, the ranking Democrat on the House Financial Services Committee, said in a statement on Tuesday. “This legislation, which according to the New York Times was primarily authored by lobbyists at Citigroup, would be a huge gift for Wall Street’s largest banks.”

The House approved the bill last fall, with bipartisan support. But the bill died in the Senate, where lawmakers were reluctant to roll back Dodd-Frank. The Treasury Department also opposed the bill, warning that it could leave the nation vulnerable again to excessive financial risk-taking.

The White House has previously threatened to veto this bill and others that take aim at the core of Dodd-Frank. But with a government shutdown on the line, the White House may not be as willing to fight the measure.

Protess characterized Dodd-Frank as "the most comprehensive regulatory overhaul since the Depression and one of the Obama administration’s signature legislative achievements. "

Yes and no.  The White House was not willing to fight the measure in part because notwithstanding the importance of financial reform, it is not "one of the Obama administration's signature legislative achievements." It is known, after all, as "Dodd-Frank" not "Obama."  Ask Americans about the Affordable Care Act and eyes will glaze over; ask about Obamacare and they'll know you're talking health care reform.

Financial reform is not an achievement credited mostly to President Obama, nor does it come readily to the voters' minds as Obama's most important achievement.  His commitment to it is more than in doubt.  Steve M. notes the President's "economic progressivism has always stopped at Wall Street's edge" (actually, before Wall Street's edge, but point well taken).

House Democrats did the White House a favor on Thursday. A year from now, the Republican Congress is going to have to figure out how to fund the government in 2016. And Obama is going to be the only Democratic veto point. With the near-collapse of the CRomnibus, Elizabeth Warren and House Democrats gave him a lot more ammunition to tell Republicans there there are deals he simply can't sell to his liberal wing, and so will have to veto.

Steve M., who recognizes Senator Warren (photo below from AP via Politico) as "the spiritual leader of this rebellion" (aside, he says, from Nancy Pelosi, though that is unnecessarily kind to her), realizes "It's good if Americans identify the Democratic Party increasingly with Warren, because her #1 issue is the mistreatment of ordinary citizens in this economy, and she's better at explaining why economic liberalism is good for ordinary Americans than Obama is. "

But it's going to take more than Elizabeth Warren and her colleagues who understand she knows business law, and arguably economics, better than any other member of Congress.  Ammunition works only if it is used or there is a credible bluff behind it.

When historians think of President Reagan, they think downfall of the Soviet Union. For Bill Clinton, it is the balanced budget (probably even more so than you-know-what, and clearly so in the minds of the public, which now adores him).  For George W. Bush, it is the disastrous war in Iraq. Notwithstanding any of the hundreds of other things, good and bad, they've done, presidential reputation generally endures because of one major item.

For Barack Obama, that will not be financial reform, whether Dodd-Frank or revision of the push-out rule, whose devastating effect (if it comes about) will be several years down the road- after Obama is long gone. It will be the Affordable Care Act. That is where he has, and will continue to, make his stand.  If Senator Warren is to succeed in staving off national economic suicide, it will be more despite, than because of, President Obama. 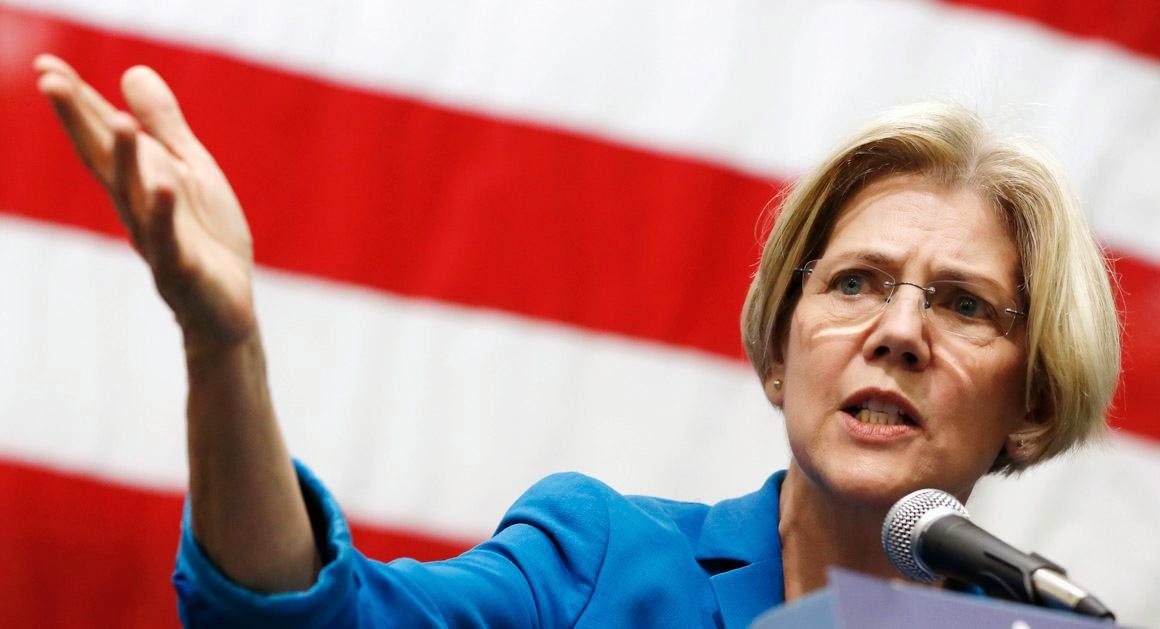