And In The Mountain West, Real Courage

Word that Caitlyn Jenner will be presented the Arthur Ashe Courage Award in July from ESPN has brought both accolades and criticism. Some people have argued that the award, usually- but not always- given to a sports figure, should instead have been given to Iraq veteran Noah Galloway or Lauren Hill, a Mount St. Joseph basketball player who fought valiantly before succumbing to brain cancer.

Good for Jenner, though, for being recognized for bravery.  Good, too, that she was able to score a starring role in a reality television program, first announced in April on ABC's 20/20 to fellow Republican Diane Sawyer.  The first of eight one-hour episodes of "I Am Cait" reportedly will air on the E! Network on July 26.  Cynics may suggest that this cheapens Jenner's culturally transformative story, but she deserves the privileges of the genre no less than does June Shannon of "Here Comes Honey Boo-Boo," Phil Robertson of "Duck Dynasty," or Jim Bob Duggar of "19 and Counting."

Being forced to endure the humiliation of being paid millions for the show, plus the inevitable endorsements and increase in speaker fees, is testimony to the extraordinary courage being displayed by Jenner. Still, I would have passed over Caitlyn in favor of an Idaho woman, Jennie Linn McCormack (photo below from Robyn Twomey/Newsweek via  RH Reality Check), who Mark David Stern explains

had just finished doing laundry and putting her 2-year-old son to bed when she heard a knock one evening in May 2011. McCormack, a single mother of three living off child support checks, opened the door to find a police officer. He was there to arrest her. The officer explained that McCormack had committed a serious felony under Idaho law—by giving herself an abortion. He proceeded to barrage her with invasive questions about her body and her ex-boyfriend.

“How can you question me about my personal stuff?” McCormack demanded, according to an NPR report.

“Well,” the officer apparently responded, “there’s legal and there’s personal.” The state charged McCormack with intentionally self-terminating her pregnancy, a crime punishable by up to five years in prison.

After several humiliating hearings, McCormack and her attorney defeated the charge. McCormack actually had given herself an abortion in late 2010, mostly out of desperation: There were no abortion clinics anywhere in southeast Idaho, and an abortion in Salt Lake City, 138 miles away, could cost $2,000. So McCormack procured abortion pills online and took five. She hadn’t realized that her fetus was between 19 and 23 weeks old—and that she was much too far along in her pregnancy to have a safe nonsurgical abortion. McCormack told her friend about the abortion. The friend told her sister—and her sister told the police, who found the fetus wrapped in bags on McCormack’s back porch

After a judge dismissed the case against her for lack of evidence, McCormack was legally off the hook. But she was also furious: furious that Idaho had intruded so deeply into her private life, furious that its strict abortion laws had driven her to such desperate extremes, furious that other women in her situation might be forced to undergo unsafe abortions at their own hands. So McCormack and her lawyer—who happened to also be a doctor—brought a class action in federal court, seeking to have a slew of Idaho’s draconian anti-abortion laws struck down as unconstitutional.

On May 29, the 9th U.S. Circuit Court of Appeals granted McCormack’s wish. It affirmed a lower court’s invalidation of the self-induced abortion statute, as well as three other laws: one that barred abortions of fetuses at 20 weeks postfertilization, one that required all second-trimester abortions to occur in hospitals, and one that placed onerous burdens on clinics in the form of safety regulations. The litigation may not be over: Idaho can ask a bigger panel of 9th Circuit judges to rehear the case or appeal the ruling to the Supreme Court. Still, as states like Wisconsin move closer to enacting shockingly stringent abortion laws, the decision is a powerful affirmation of constitutional autonomy in an age when that value is in short supply.

The court's ruling is not insignificant in the struggle for reproductive rights. Stern remarks

this case arose because a woman gave herself an abortion—and was arrested because of it. She herself was the “abortionist.” Since she aborted her own fetus, why shouldn’t she be prosecuted? And if she truly killed a baby, as anti-abortion groups believe, shouldn’t she be charged with first-degree murder? The McCormack case presents thorny questions that anti-abortion activists would rather not answer. Better to scapegoat the abortion providers—and pretend that a woman is not the one who makes the ultimate decision to end a pregnancy.

This case refutes the anti-abortion rights meme that doctors- or, as the right slanders them, "abortionists"- not women make the decision to abort.  But while there is a "T," there is no "A" (as in "abortion"),  in LGBT.   So while Caitlyn Jenner will ride the crest of fame and fortune for a spectacular act, there will be no television program, no speaker fees, and little if any applause for an Idaho woman whose courage will not be acknowledged by the celebrities behind the ESPY awards. 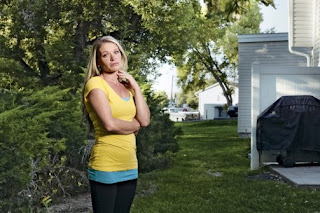