Jonathan Martin and Maggie Haberman, currently at The New York Times, should know better than to argue that in appealing to the Democratic base, Hillary Clinton is

forgoing a determined outreach effort to all 50 states, or even most of them (which) could mean missing out on the kind of spirited conversation that can be a unifying feature of a presidential election. And it could leave Mrs. Clinton, if she wins, with the same difficulties Mr. Obama has faced in governing with a Republican-controlled Congress.

The Martin/Haberman thesis is eviscerated by Heather Digby Parton, Steve M., and Erik Loomis. SM points out that Hillary Clinton's presidency- like that of Bill Clinton and Barack Obama- "won't be deemed legitimate either, even if she wins 49 states."  The latter two presidencies bracketed that of the guy for whom fewer votes were cast nationally- and in Florida- and then when appointed by the US Supreme Court, claimed a mandate for taxes, war in Iraq, and for practically everything else.

Oh, yes, the war in Iraq, which demonstrated the existential beauty of bipartisanship, in which (a minority of) Democrats joined with congressional Republicans in giving George W. Bush a mandate to embark on what arguably is the greatest foreign policy blunder in American history.

That war was conducted against a nation the Bush Administration strongly implied, at virtually every juncture, was responsible for the terrorists who killed nearly 3,000 Americans on 9/11/01.   But even with most Democrats now recognizing it was a costly error, Gulf War II continues to have bipartisan overtones.

In one of those troubling instances of bipartisanship

Since the early days after the Sept. 11 attacks, when news emerged that most of the airline hijackers came from Saudi Arabia, dark allegations have lingered about official Saudi ties to the terrorists. Fueling the suspicions: 28 still-classified pages in a congressional inquiry on 9/11 that raise questions about Saudi financial support to the hijackers in the United States prior to the attacks.

Both the administrations of George W. Bush and Barack Obama have refused to declassify the pages on grounds of national security. But critics, including members of Congress who have read the pages in the tightly guarded, underground room in the Capitol where they are held, say national security has nothing to do with it. U.S. officials, they charge, are trying to hide the double game that Saudi Arabia has long played with Washington, as both a close ally and petri dish for the world’s most toxic brand of Islamic extremism.

President Obama has decided to suppress the information despite telling three individuals (two separate occasions) who lost family members to the World Trade Center attacks that he would release the 28 pages. He has chosen to ally himself with President Bush (with Crown Prince Abdullah of Saudi Arabia in April, 2005, photo from Jason Reed/Reuters) in shielding Americans from the truth.  However, now that (with the help of Rachel Maddow and her researchers) the suspicion that the subsequent war was fought over oil has been firmly substantiated, things are falling into place. 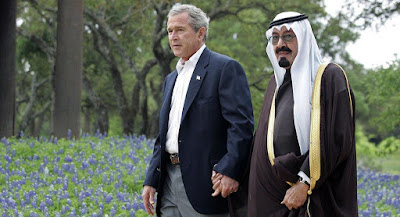 Senator Rand Paul at a news conference (video below) on June 2 announced that he would be introducing the following week Senate Bill 1471 as a companion to House Resolution 14, requiring the release of the suppressed material. During the event

Of the speakers, former Senator Bob Graham, who co-chaired the inquiry that produced the 28 pages as part of a much larger report, spoke most pointedly about the 28 pages and what they reveal: “The 28 pages…go to the question of who financed 9/11 and they point a strong finger at Saudi Arabia.”

According to Graham, the release of the 28 pages will have broad ramifications. “The 28 pages are very important, and will…inform the American people and, in so doing, cause the American government to reconsider the nature of our relationship with Saudi Arabia.”

Graham said the 28 pages are “emblematic of a pattern of withholding information, unnecessarily and to the detriment of the American people.”

Aside from former Democratic Senator Graham of Florida and GOP Senator (and presidential hopeful) Paul of Kentucky, the news conference included Republican U.S. Representatives Thomas Massie of Kentucky and Walter Jones of North Carolina, as well as Democratic Representative Stephen Lynch of Massachusetts.   Democrat Ron Wyden of Oregon reportedly will sponsor the bill with Paul.

There is bipartisanship, and then there is bipartisanship.   Some members of the media long for a the kind of bipartisanship which obscures values and priorities by shrouding issues in mystery. The last two presidents have blocked publication of the truth about the  worst terrorist attack in U.S. history. But in a twist, it might be a bipartisan effort that opens the curtain and lets sunshine in upon the events which led to the devastation visited upon the nation nearly 14 years ago.